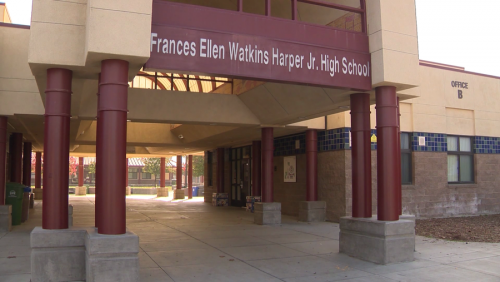 On Friday, DJUSD sent out a notice to parents of Harper Junior High students that there was a threat received via the STOPit app.  The threat claimed that there would be a school shooting at Harper Junior High School on Monday, March 5, 2018.  At that time, they indicated that they would make a decision by 5 pm on Saturday as to whether Harper would be closed on Monday.

According to a media release, “Davis Police officers, working with the Davis Joint Unified School District, were able to identify the source of the threat made against Harper Jr. High on Friday, a male student in his early teens.  Further investigation revealed the threat was a prank.”

The district stated, “Any legal or school disciplinary measures related to this matter are being handled by the appropriate entity.”

In a separate release, the Davis Police announced that “no arrests have been made at this time.”

The Davis Police Department will continue to work with the school district on this matter to determine appropriate consequences.

Davis Police Lt. Paul Doroshov told the Vanguard that it was a gun threat, that “the word ‘gun’ per se was not used, but the threat was to shoot.”

He added, “It was a third person type threat where the person wrote that someone else was going to come to school and shoot.”  The lieutenant confirmed, “No one has been arrested.”

In a statement from Superintendent John Bowes, “In light of the recent school shooting in Parkland, Florida and other recent tragedies, effective partnerships with the Davis Police Department are more important than ever.”

He further stated that at this point, all schools in the district will be open on Monday.  “There are no known threats to any campuses.”  He added, “We understand that events like this can cause fear and stress. If you have questions or need support for your student, please contact your child’s principal or counselor.”

The threat comes a matter of days after the school board held a discussion on school safety improvements on Thursday night.

The school board in a motion made by Madhavi Sunder, seconded by Barbara Archer, directed staff to create a community task force charged with studying school safety practices as well as upgrading signage on campus that identifies school office and campus buildings, as well as perimeter areas that are shared by a school and a city park.

Staff was also directed to create a school safety component in the new facilities master plan that the district is developing, as well as perform a cost analysis of adding a second school resource officer from the Davis Police Department.

The motion came after numerous parents identified the issue of school safety as a matter of grave concern to parents who are increasingly worried about threats to schools, in light of recent events not only at Parkland in Florida, but also in the school district itself.

A number of safety improvements are already underway including strategic fencing, school signage, door blocks, active shooter training, active shooter drills, and intrusion detections through the use of the Raptor software.

There are barriers to some of these upgrades,  Staff warned that DJUSD “does not qualify for safety grants due to low City crime rate and few incidents of school violence.”

Fencing would have impacts on shared use with city parks.  And such upgrades as fencing, signage, and keycard entries are expensive.

Director of Facilities David Burke warned that “retrofitting a school built in the 1950s with modern safety measures is expensive.”  Rather, he suggested it would be easier to construct new classroom buildings than to retrofit aging classrooms, many of which are nearly 70 years old at this point.

Another one of the parents speaking during public comment indicated that there is a level of concern, even panic, among parents who are concerned about the lack of current school safety measures.  Some urged for more police and school resources officers on campus, more proper access control and stronger enforcement of visitor check-ins and screenings on campus.

Some parents noted that classroom doors are typically unlocked during the school day, and voiced surprise that security staff are onsite only at junior high and high school campuses, and not at elementary schools.

However, another parent warned that “there’s a real downside to making our schools into fortresses.”