There is an overlap with several different schools of thought which converge to create opposition to building a downtown parking structure – environmental concerns and transportation models merge with fiscal concerns, which merge with land use and growth concerns.  The result is seven of the nine candidates for council came out against a downtown parking structure when asked by the Sierra Club.

Gloria Partida said, “I support the construction of a parking structure at the Amtrak lot paid for by transportation funds and grants. I also think that regular bikes should be provided at parking lots for sharing with patrons to downtown.” 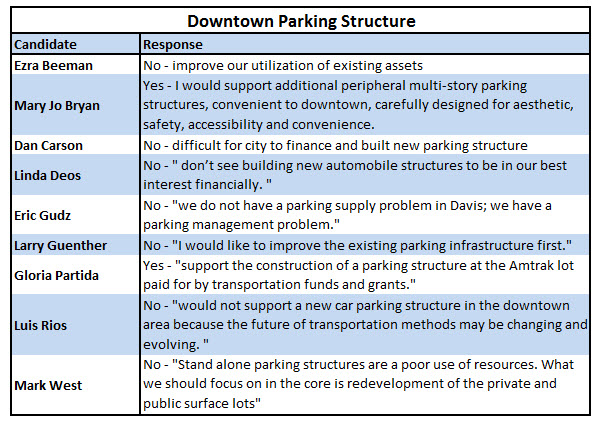 But the opposition dominated the conversation.

Mark West argued, “Stand alone parking structures are a poor use of resources. What we should focus on in the core is redevelopment of the private and public surface lots into mixed-use projects with retail and other commercial on the bottom, residential above, and parking hidden behind and below.”

Ezra Beeman called this “only a near-term solution.”  He also noted that “the current parking garages are almost never full.”

Instead, he argued, “Improving our utilization of existing assets should be prioritized.”

He added, “I want to see the data on congestion periods, and drivers of this congestion.”

The city earlier this year provided the data that showed a high level of congestion during peak hours, but available spaces at other times.

Mr. Beeman did not foreclose the possibility of a parking structure, arguing, “The best site appears to be on Hickory Lane with a railroad undercrossing into the downtown. This is in the general

plan, yet the city has neglected to establish a funding program to make this happen. This site can displace rail commuter parking from inside the triangle, freeing up more day parking in the core.”

Dan Carson, from a fiscal standpoint, argued, “The state’s repeal of redevelopment funding mechanisms will make it much more difficult for the city to finance and build an expensive new downtown parking structure to increase parking supply.”

Until that problem can be overcome, he supports the following: phone apps, bike-friendly events, a new downtown plan with rental and owner-occupied housing, as well as other sites for parking.

Linda Deos argued, “I don’t see building new automobile structures to be in our best interest financially. This is because car ownership is steadily decreasing year by year and thus the alleged need to further subsidize automobiles lessens.”

She said she is not “convinced of such a need.”

obsolete in 15 years with automated vehicles).”

Larry Guenther instead argued for revamping the X-permit system, working with downtown banks to reduce branch size and partner with the city, paid parking and working to “stop using the automobile as the central concern of our land-use planning.”

Luis Rios said, “I would not support a new car parking structure in the downtown area because the future of transportation methods may be changing and evolving. With limited space, the City needs to explore zipcar stations and bike-sharing racks in the area. Other options should be explored in lieu of a massive parking structure.”

Staff reported, “Generally speaking, the ideal parking occupancy rate is in the vicinity of 85%. At this usage, the parking supply is being efficiently used while spaces remain available for new arrivals, preventing vehicles ‘circling’ downtown blocks in search of a parking space.”

The problem was that the downtown experiences parking peaks during the lunch and evening time frames.

This article contains a number of graphics that show the peak hour parking shortages: