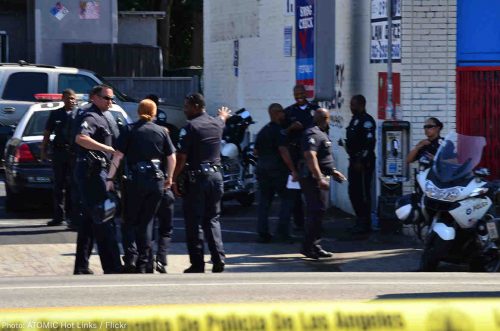 Police in California have a problem with deadly force. Last year, police shot and killed 162 people in the state, half of whom did not have guns. California departments have some of the highest rates of killings in the nation. In a 2015 report, for example, the Guardian identified central California’s Kern County as the place where a member of the public is most likely to die at the hands of police.

Those figures are alarming, but even more shocking were the sentiments expressed by Kern County Sheriff Donny Youngblood in a recently-unveiled video from 12 years ago. During a meeting with the county’s Detention Officers Association, Youngblood told the audience that it is better financially for the county when his deputies kill someone rather than injure them.

“If we cripple them we get to take care of them for life, and that cost goes way up,” he told the union members. “You know what happens if a guy makes a bad shooting on somebody — kills them?” Youngblood asked the audience. “Three million bucks, and the family goes away.”

Sheriff Youngblood’s comments show what families and communities affected by police violence already know: There is little recourse for victims of police shootings and little incentive for officers and police departments to change.

This is unacceptable. And yet, under California law, it is perfectly legal for a police officer to shoot and kill someone, even if other alternatives are available and even if the killing wasn’t

necessary to keep officers or the public safe. Officers are rarely held accountable because the law allows police to use deadly force whenever an “objectively reasonable” officer would have done so under the same circumstances, and courts have said that police don’t have to use the least amount of force possible for their conduct to be “reasonable.”

Police officers who kill people are seldom prosecuted and, so far as we know, seldom even disciplined. Between 2005 and 2016, only two police killings carried out during an arrest were deemed unjustified out of nearly 1,200 reported by local police departments, according to California Department of Justice data.

It’s time for California to adopt a new, commonsense standard that recognizes the value of preserving human life. Police officers should be prohibited from using deadly force unless necessary, instead of whenever “reasonable,” and they should be required to use “de-escalation” tactics to defuse a situation or other alternatives to deadly force where possible.

Assembly Bill 931, authored by Assembly Member Shirley Weber, would enshrine that rule in state law and help ensure that police use deadly force only as a last resort. The bill would also require that decision makers from police chiefs to juries look at officers’ entire conduct leading up to their decision to pull the trigger. That way, officers can be held accountable for gross negligence when they escalate a situation that ends with someone dead.

These requirements are becoming more and more common across the country. A number of individual police departments have already implemented variations of AB 931’s provisions, including the FBI, and some have adopted all of them. The San Francisco Police Commission recently approved a use of force policy with a necessity standard. The policy requires that officers use de-escalation techniques and alternatives to deadly force. And when a deadly shooting does occur, officers are judged on their entire conduct leading up to the shooting, not just when they pull the trigger.

Several departments have adopted similar use of force policies under the guidance of the U.S Department of Justice, including Seattle and Chicago. Two major law enforcement groups, the Police Executive Research Forum and the International Association of Chiefs of Police, have released model policy guidelines that call for higher standards than just reasonableness, including de-escalation and holding officers accountable for creating circumstances that justify deadly force.

While some police departments have adopted these policies, AB 931 would make California the first state in the country to make these best practices law for all law enforcement agencies. This would be a significant shift, and the data show that these policies work. Departments with tighter limits on when police can use force kill fewer people. At the same time, those departments see, on average, lower rates of officer assaults and similar crime rates to departments with looser standards. Reducing police deadly force helps everyone’s safety.

We’ve seen far too many tragic and unnecessary shootings, and they won’t stop until we change the law. Join us in this fight to save lives and hold police accountable.

Peter Bibring is the Director of Police Practices, ACLU of Southern California