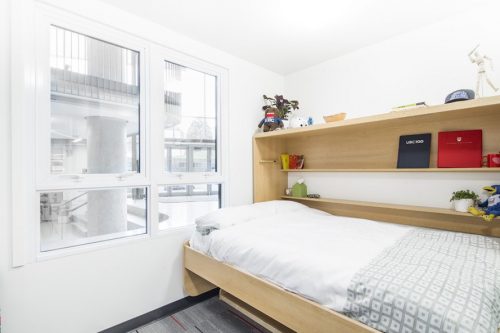 Over the weekend, the Vanguard published a letter from former City Councilmember Michael Harrington, who asked why he could not have separate rates for student housing versus other renters, but the city could pass the Nishi affordable housing plan with a 5-0 vote.

He writes, “This question is not anti-student or anti-student affordable housing.   It’s a basic fair housing question.”

He then asks, “Is there some sort of legal opinion in the public record where the City justifies this restriction on the 15% benefit to students?  If so, may I have a copy?”

The city responded stating, “In consultation with City legal counsel, we provide this response to your e-mail of March 30, 2018.”

He added, “Non-students are not a protected class of renters under state or federal fair housing laws, and therefore limiting housing to students does not constitute a fair housing violation.”

One of the city goals is to increase “affordable housing options for students.”  The Nishi development agreement establishes Baseline Project Features and provisions for affordable housing.

The original plan was to provide 264 of the estimated 2200 beds beds to extremely-low and very-low income residents within double-up bedrooms integrated into the overall development.

At the February meeting, the council discussing the plan increased the number to 330, with 110 in the extremely low category and 220 at the very low category.

The council asked Aaron Latta to come forward to provide a student perspective.  He said, “At the bottom line, any level of affordability for students is a good thing.  This is the second project that exists that has it.”

In his letter, Mike  Webb points out, “The Nishi developers will have to ensure that the implementation of their affordable housing program will not result in a disparate impact on any protected class of people, as do all providers of student housing, including universities.”  He added, “The Nishi developer has committed as part of the entitlements to comply with all applicable fair housing laws in implementing the affordable housing program.”

Michael Harrington writes, “I am truly puzzled by the city and Nishi’s action on the 15% set aside.”  He argues, “I think any adult human being with lower income should be able to apply for that 15%?  It’s private land, and governed by state and federal fair housing laws.”

Mr. Webb  responds, “While you are entitled to that perspective, the City Council does have the discretion to approve affordable housing for specific segments of the population where there is a particular need.”

He continues: “The City Council received extensive public testimony in connection with both the Lincoln 40 and the Nishi development projects regarding the struggles that college students face in securing housing in Davis.  These challenges are especially acute for lower income students, who will struggle to afford market rents in Davis, and are not eligible for most of the City’s other affordable units.”

As the Vanguard has pointed out previously: “Full time students that are single and do not have dependent children are generally not eligible for Section 8 rental assistance or any affordable housing projects assisted under the federal low income housing tax credit program, and students that are dependents of their parents cannot meet the eligibility requirements established for the vast majority of the City’s existing affordable housing units.”

In response, Mr. Harrington asks, “I notice that much of the authority is from outside of the US Circuit Court of Appeals for our jurisdiction, the 9th Circuit.  Do you have any supporting citations to binding state and federal case law in this jurisdiction?”

In a separate email response: “Another issue I have is the citation to cases involving public entity housing, rather than a purely private development such as Nishi.  We all know that UCD has far, far more latitude with selecting residents in its public housing.  So the City’s analysis should be limited to analogous situations.”

He continues: “But I just want you to know that I’m still stuck on the main issue:   by the City’s analysis, any private landlord in Davis is free to rent ONLY TO STUDENTS, or ONLY TO NON-STUDENTS.   In my years as a property owner, and a member of the CC, I have never heard or heard of ANYONE taking that position who has private housing.    The City itself cannot do that … only UCD.    So something does not add up here …”