We get caught up in the endorsement game.  It is interesting to see who will endorse whom.  And there is a piece angry at Bill Dodd and Cecilia Aguiar-Curry for supporting Jeff Reisig for Yolo DA.  But at the end of the day, most endorsements mean very little.

But that might be different for Will Arnold – although perhaps not in the conventional sense.  It is good news for Dean Johansson, who has largely been shut out of official endorsements from the Woodland and West Sacramento City Councils, that he has gotten Brett Lee and now Will Arnold.

The focus of this election has rightly been on the big issues facing the local prosecution of cases.  Indeed, a primary reason identified by Councilmember Arnold is criminal justice reform.  He cited the fact that Dean Johansson “is a proponent of Governor Brown’s criminal justice reform efforts, which have been strongly supported by Yolo County voters.”

He writes, “Unfortunately, our current District Attorney has consistently opposed those reforms.  It’s time for a change.”

We have referenced the fact that the DA opposed AB 109, opposed Prop. 47, opposed the death penalty reforms, and opposed Prop. 57, among other things.  Heck, he was even one of four DAs to oppose

Prop. 64, the legalization of recreational marijuana, an issue where Will Arnold has been a strong proponent.

We know about all of that.

But the bigger news is that Will Arnold may have found an issue that no one seemed to know about – even me.  We all know about the record of the DA on law and order issues and mass incarceration, but what about guns?

In 2010, the US Supreme Court issued a landmark decision, McDonald v. Chicago, in which it found that the right for an individual to keep and bear arms was protected under the Second Amendment.  According to Wikipedia, “The decision cleared up the uncertainty left in the wake of District of Columbia v. Heller as to the scope of gun rights in regard to the states.” 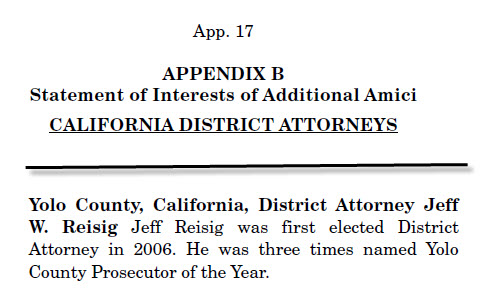 It turns out that the Yolo County DA (see page 70 of the amicus brief) signed onto a brief signed by 34 other California elected DAs “concerned with protecting the public safety benefits of citizens possessing firearms for self-defense.”

As pointed out, the post-Heller cases which includes McDonald and others, argue that the Second Amendment should be applied to the state and local governments through “selective incorporation.”

Among those in dissent were Justice John Stevens and Justice Stephen Breyer.  In his dissent, Justice Breyer wrote, “In sum, the Framers did not write the Second Amendment in order to protect a private right of armed self defense. There has been, and is, no consensus that the right is, or was, ‘fundamental.'”

This was a big victory because it applied Heller, filed by the NRA to challenge local gun control measures, to the states and challenged very basic levels of gun control..

In their amicus, Jeff Reisig and others cited the Heller decision which stated, “It is not the role of this Court to pronounce the Second Amendment extinct.”

They write: “Having saved the Second Amendment from that fate, it is equally true that it is not the role of this Court to deem Second Amendment rights less worthy of incorporation than other rights of the people enumerated in the Bill of Rights.”

They add, “Accurately considered the ‘true palladium of liberty,’ the people’s right to keep and bear arms should be incorporated into the Due Process Clause of the Fourteenth Amendment, and rightfully take its place alongside all the other fundamental rights that the right to arms secures.”

It is not even control – it is licensing and accountability, and it is that which Jeff Reisig was fighting against in signing onto the amicus brief.

As Will Arnold writes, “Of special concern to me is the issue of gun violence.  It is both a national and local issue.  I was disappointed to learn that our current District Attorney signed on in support of the NRA lawsuit to restrict local and state gun control efforts.  As a locally elected official who represents a community that wants to reduce gun violence, I want a District Attorney who shares that priority. This is a rare opportunity for Yolo County voters who share my concern about gun violence to send a message on this issue.”

Councilmember Arnold has now opened a whole new front in the DA’s race that we will be exploring in the coming weeks and months.  And it seems that Jeff Reisig is not only out of touch with the county on criminal justice reform issues, but also on the very basics of gun control.

24 thoughts on “Commentary: Why Will Arnold’s Endorsement Might Be a Gamechanger in the DA’s Race”