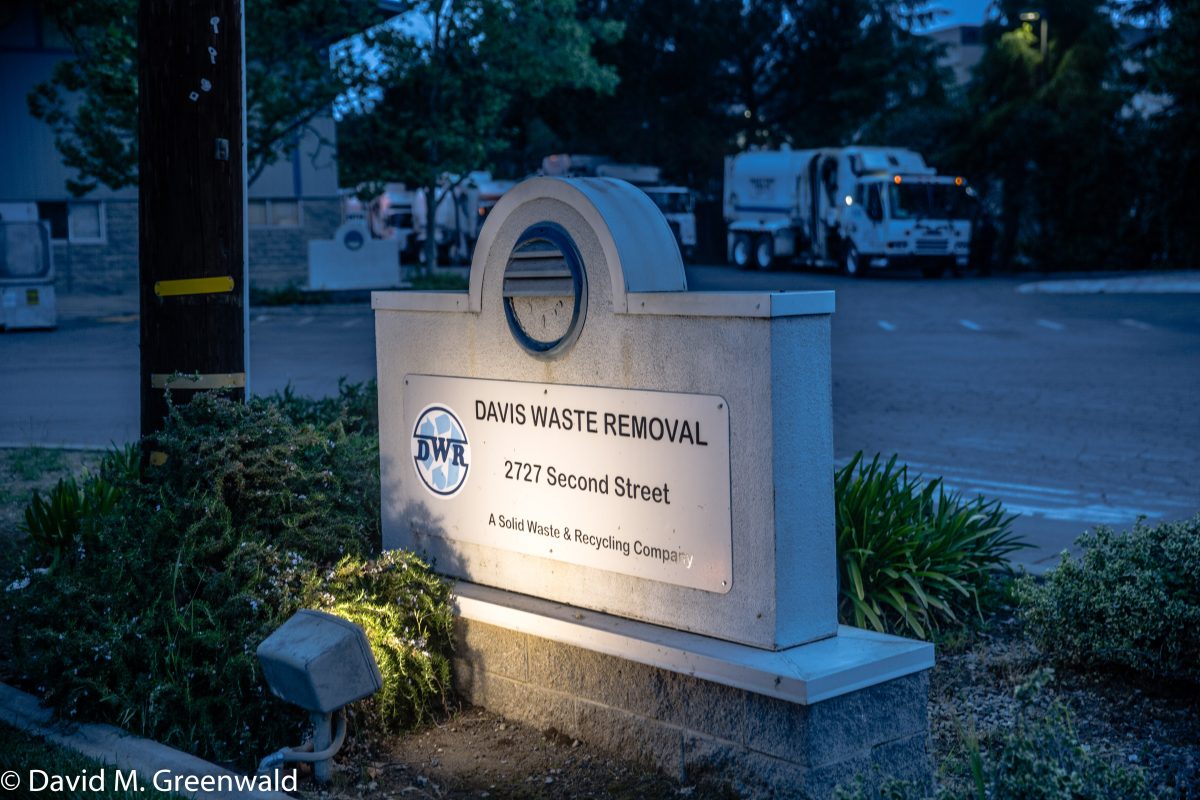 In a rare early release of the staff report for next week’s city council meeting, staff recommends that the council approve a resolution that would authorize City Manager Mike Web to execute the Franchise Assignment Agreement, assigning the Solid Waste Franchise to Recology Davis.

Council is also asked to direct staff to work with the Utility Rate Advisory Commission (URAC), Natural Resources Commission, and Finance and Budget Commission over the next 2 years “to study the feasibility of relocation of the Material Recovery Facility (MRF) from 2727 2nd Street, Davis to another site and provide recommendations on the long-term strategy for Solid Waste handling.”

The staff report comes two days after a closed session meeting on the Solid Waste Franchise generated no reportable action.

Prior to that meeting, the URAC issued a recommendation that they adopted on Monday evening: “The URAC recommends that the City Council defer action on the DWR transfer and undertake a thorough comparative analysis by an independent third party and public discussion of the benefits and costs of a city acquisition of the DWR property versus the current plan to transfer the property and business to Recology, including the three sources of ratepayer value identified by the URAC task group.”

Back in February, the council voted unanimously to move forward with a waiver of the right to first refusal to purchase any or all of DWR’s business facilities, thus paving the way for the Recology transfer.

Council felt like at this time they were not equipped to set up their own MRF, however, this agreement would give them the option to do so in about a decade.

In February 2015, the city and DWR “entered into an agreement granting DWR exclusive rights to haul waste (solid waste franchise) in Davis until the year 2027.”  The agreement gives DWR the right to sell and reassign the franchise with the approval of the city, but the city has the right of first refusal, “to purchase all, or any portion of DWR’s business operations, facilities and/or equipment.”

On September 8, 2017, the city received a request from DWR that the city waive its right of first refusal to allow DWR to sell the franchise to Recology.

The move has generated controversy, in particular from the Utility Rate Advisory Commission which believes that they have not been given an ample opportunity to evaluate the offer.

As Richard McCann told council in February, “We had a subcommittee appointed to help the staff assess this, they did not inform the subcommittee that this was occurring. They gave no opportunity for input.

“This is going to have a big impact on rates,” he said. “Now we’re left with two days in which to make a decision, with no input from our commission. It might be a good deal, I don’t know, we haven’t been able to see it.”

Elaine Roberts Musser told the council, “This has more been one of process. This has been more a blind process where citizens really haven’t been given any chance to give input and you have several commissions eager to give input and we can’t because we really don’t know what’s going on.”

Council pushed back against the five URAC members (out of eight on the commission) who spoke that evening.

The city staff also believes “it is in the public’s interest to continue with the recently adopted (2015) solid waste agreement, retain program stability, and consistency by assigning the transfer to Recology Davis while beginning an in-depth public process to assess long-term strategies for solid waste.”

They note that the council does not believe that “managing additional facilities or utility operations at this time is in the best interest of the city.”

Staff argues that “the transfer and assignment of the franchise continues the existing operational relationship between the city and the solid waste franchisee. Approving the transfer from one operator to another is not a ‘gift of public funds’ as the City has already provided for a transfer under the terms of the franchise and Recology has the capacity to perform.”

Staff adds that “the price paid by Recology to acquire the assets of DWR may not be included in the rate calculations and therefore, will not be paid by Davis ratepayers.”

In response to the URAC motion from April 2, staff says it concurs that “an in-depth review of the City’s solid waste management is necessary,” however, they believe “this review can be conducted after the assignment of the agreement is completed.”

Staff writes, “If further analysis indicates that local control of either solid waste assets or solid waste commodities, or partnerships with other agencies can provide benefits to the community, and Council provides policy direction consistent with one or all of those options, staff would begin the process of establishing all permitting and development prior to the end of the existing franchise agreement in 10 years.”