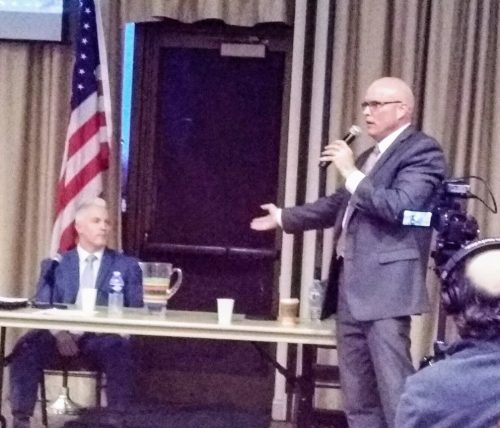 But in the End – Two Candidates with Different Views of Change

WOODLAND – It was a “battle-royal” that never quite happened. Close, some near blows, but in the end the slugfest never fully took place.

For Johansson, as it usually is for challengers, it was an uphill battle. It started early when he noticed his name was misspelled (Johanssen not Johansson) on the screens overlooking the nearly 200 people that came into the Woodland Community Center for the League of Women Voters forum.

The jam-packed debate actually had to expand into an adjoining room, and still there were people in every seat, on the floor, in the aisles and standing. The forum lasted nearly three hours.

For Reisig, it was a night when he appeared to want to throw some punches, and respond to some of the accusations thrown at him by the upstart Johansson campaign. But Reisig remained disciplined,

and kept his punches above the belt. Usually.

Johansson, who has been a prosecutor, public defender and private attorney, started by admitting he has been a “witness to a criminal justice system, watching from the front lines….I know the problems of the system,” and had seen families “destroyed” by it.

Reisig, county DA for 12 years, began not surprisingly touting his years in office and how proud he was for “vigorously” fighting for convictions to “keep families safe.” He listed new neighborhood courts, mental health courts, restorative justice and environmental policies as successful efforts to reduce mass incarceration.

Johansson, however, hammered Reisig all night about the “school to jail pipeline” that takes young men and women – especially those of color – away from their communities for small crimes for an overzealous district attorney’s office.

“Talk is cheap. We still have the highest incarceration rates in the state. Yolo is number one for trials, more trials than any other county,” said Johansson.

But Reisig stuck to his reformist character – which was supposed to be Johansson’s shtick.

“We are the first DA office to require mandatory classes on implicit (race) bias,” Reisig claimed, while noting that the county has reduced the time that defendants have to wait to get their day in court. He touted homeless courts as a way to help the homeless.

But Johansson fought back in his response to that statement, reminding the crowd that the “courthouse is the biggest building in Woodland, right across the street from a park, (with) homeless,” and a shuttered school.

Both candidates said they oppose cash bail – Johansson describing it as a system that allows “the rich to buy themselves out of jail but the poor sit and rot…I’ve seen bail destroy job prospects and families.”

And then Johansson took a shot at Reisig, calling the DA’s office not reformist, but “draconian.”

Reisig hit back, stating he supports “bail reform,” but said judges can and should make the final decision. He added that his office – in response to Johansson charges – doesn’t overcharge and rejects 20 percent of the cases brought to them.

“The facts drive our decisions. We do have discretion to charge, or send defendants to another program like neighborhood. We grapple with this every day,” Reisig said.

Johansson responded:  “This DA takes money from bail bondsman” and that “one of the hallmarks of this DA is overcharging.”

He also charged that Reisig is “keeping deputy DAs from doing the right thing with a top-down approach. The DA says he’s a reformist (but) he has fought (change) tooth and nail. He is criminalizing Black and Brown people, and I’ve seen police loading a homeless person’s belongings onto a flatbed truck” and driving away.

Reisig answered simply that “I don’t agree we’re criminalizing anyone…this is a recurring theme of misstatement of facts…what he (Johansson) is saying is untrue.”

Regarding the issue of prosecution of law enforcement in excessive force and shooting cases, Johnasson maintained that Reisig isn’t doing enough and that it’s a “festering evil…how many police shooters has the DA found to be bad…not one,” said Johansson.

Reisig – surprise – had a different view, defensively saying: “We have put cops in jail for mistreating people, breaking (the) law.”

And on the “gang crime” question, the two candidates couldn’t disagree more.

“There is gang crime, but it’s not like what the DA describes,” said Johansson, who was part of a team of lawyers who fought the gang injunction that, Johansson said, made criminals out of youth before they even did anything wrong.

Reisig was blunt. “Gang crime is real. We have to take serious steps…it is a real threat.”

In his closing, Johansson asserted as he had all night: “We need to be honest. There are real criminals and my goal is to make us all safer…but we’re spending lots on incarceration; we can use that money for education. The county has voted for change. I vote with you, not the past that has failed.”

For his part, Reisig stuck to the theme of the debate, noting in his close: “I believe we need a fair and balanced approach,” explaining that he has the support of much of the community. “They’re not suckers. They know me,” said Reisig.