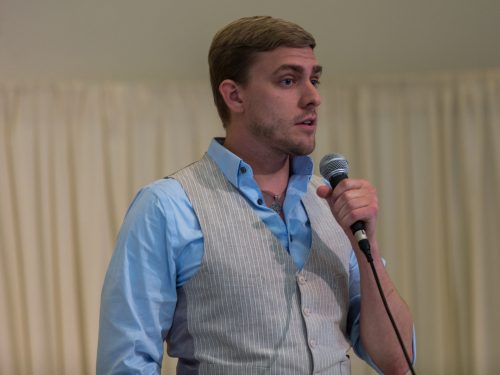 On Wednesday, April 4th, the Graduate Student Association General Assembly voted to endorse Eric Gudz on a vote of 84 for, 1 against, 6 abstentions.

The resolution  was introduced by Ellie White.

WHEREAS, the University of California Davis Graduate Student Association (GSA) seeks to advocate on behalf current and future UC Davis graduate student needs including accessibility to campus, affordable housing, and economic opportunities; and,

WHEREAS, advocacy and support of local electoral politics, which directly benefit UC Davis graduate students, is critical to improve standards of living; and,

WHEREAS, the critical housing shortage in Davis has reached a vacancy rate of 0.4% causing rents to on average rise 10% annually over the last several years; and,

WHEREAS, the lack of quality affordable housing is a major driver in forcing 20% of Masters students and 16% of PhD students to live outside of the city of Davis, which increases pollution,

traffic, and impedes the integration of the student community; and,

WHEREAS, the success of the Eric Gudz for Davis City Council campaign would be the first campaign in the history of the United States that won an elected office with an openly gender non-binary, bi, and poly candidate;

WHEREAS, the Eric Gudz for Davis City Council campaign seeks to empower the voices of graduate students and young professionals that are struggling to survive in this community; and,

WHEREAS, the outcome of this particular election will have sweeping ramifications on the development and leadership direction of the City’s General Plan update in 2020; and,

THEREFORE LET IT BE RESOLVED THAT, the UC Davis GSA endorses Mx. Eric Gudz for the candidacy of Davis City Council, informing the UC Davis graduate student community before the election on the GSA position in support of Eric Gudz.

*This resolution reflects the opinion of the UC Davis Graduate Student Association only, and is not reflective of the stance of the University of California, Davis.