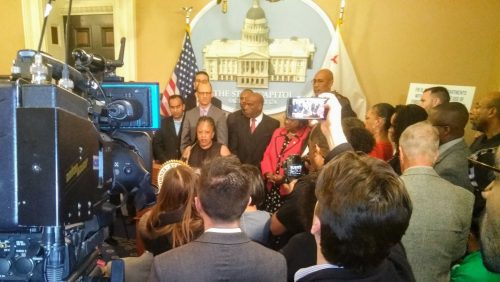 (From Press Release) – The National Lawyers Guild of Sacramento today called upon the California Legislature, and Governor Brown to approve two legislative measures involving law enforcement use of force and increased law enforcement accountability to the public.

The NLG said it endorses the Police Accountability and Community Protection Act (AB 931, Weber) which amends state law related deadly use of force by police, and (SB 1421, Skinner), a proposed amendment to California’s penal code, which will make officer personnel records and records related to certain complaints, incidents and investigations, available to the public for inspection under the California Public Records Act.

“Violent and aggressive policing is a nationwide problem, and has impacted Sacramento too many times. The violent attack on Nandi Cain, Jr., a black man stopped for alleged jaywalking, the shooting death of Joseph Mann, a mentally ill black man and the recent killing of Stephon Clark, a young black man in South Sacramento, are just a handful of cases that made national headlines and sparked outrage at law enforcement.

“AB 931 and SB 1421 are all the more relevant and necessary following the latest tragic and unnecessary police killing of Mr. Clark, which occurred ostensibly because officers mistook a young man’s

cell phone for a gun. Under current law, police are permitted to use deadly force where it is ‘objectively reasonable,’ a standard that has ensured that officers and departments face few consequences when questionable uses of force occur.

“Under AB 931 the use of deadly force would only be allowed when necessary to prevent imminent and serious bodily injury or death, and would also require police to utilize de-escalation tactics, prior to using deadly force. By changing this standard, the legislature can send a clear message to law enforcement agencies that deadly use of force should be considered a last resort, rather than the first option.

“Change in the law must occur before any significant change in the culture and practices of law enforcement are able to take root. While these bills will not solve the problems of racially discriminatory policing practices overnight, they are a positive step in creating accountability, transparency, and encouraging the use of nonlethal tactics.”

Share:
Tags:AB 931NLG-SacramentoPolice Accountability and Community Protection ActPolice Use of Force
Previous : Judge Denies Motion to Strike Charges in Drug Case
Next : In Davis, Yes There Is a Union Difference in Food Service