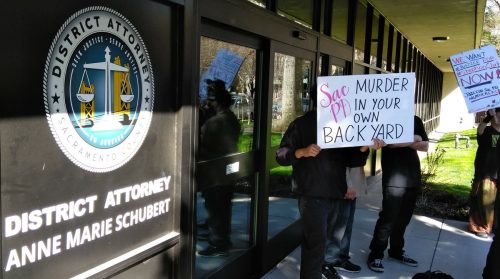 But Protests and Arrests at Her Office, and Her Refusal to Go Out in Public Still Dog Incumbent

Take Monday for example. Her office reversed fields, and after keeping Stevante Clark – the older brother of Stephon Clark who was shot and killed by Sacramento police March 18 – in jail on $1 million bail, agreed to release him with no bail. Not a penny, after he was deemed so dangerous that $1 million bail kept him a guest of the jail over a long weekend.

The DA still kept him in jail since Thursday, a practice known as overcharging which many defense lawyers call an art form that many district attorneys use to keep suspects in jail – usually the poorer ones. Wealthy suspects can usually buy their freedom.

Clark, last Thursday, was acting erratically, according to witnesses, threatening people and smashing things. He was arrested, and kept in Sacramento County Jail on multiple felonies until

But Monday, in an afternoon bail  hearing, Clark was released on just his own recognizance (OR). In short, no bail and he must appear at another hearing May 9 facing just four misdemeanors, including making false 911 calls, death threats, assault and vandalism.

“It tells me someone didn’t review it (the original charges last Thursday),” said Jeffrey Fletcher, Clark’s lawyer, after the hearing. He said it was “unusual” to have $1 million bail reduced to just an “OR” release at the first hearing after an arrest.

The prosecution, which usually fights bail reductions, this time had no objection and even recommended “Mental Health Court” for Clark, who had spent a few days in a mental health facility since his brother was shot in the back six times while carrying only a cell phone.

“I’m glad he (Clark) is feeling good. I’m sure he’ll have no problem complying with the conditions of  his release,” added Fletcher, referring to Judge Joseph Orr’s admonitions to Clark that he not make unnecessary 911 calls, obey all laws and not go within 100 yards of several individuals in and near the home at which he was arrested.

There’s been a series of protests because of the police killings – including three every week at the district attorney’s office calling on DA Anne Marie Schubert to charge the two officers with murder.

That leads to Schubert’s Number Two problem: Protests at her office.

Last week, two protestors were arrested and other injured after police set up a skirmish line behind her office in an alley. Black Lives Matter Sacramento called it “police violence,” and if Schubert decides to prosecute two (according to videos) nonviolence protestors, it’ll look like she’s using her office to retaliate against community members for protesting her actions, or non-actions.

Starting this week, protestors will be met not just by dozens of Taser-wielding, baton-waving and rubber bullet-armed police, but by a 10-foot fence all around her office and the grass in front of it.  Stay-tuned, protestors said Monday, to  see how that goes.

That leads to Schubert’s Number Three problem: She won’t go out into the community.

Schubert literally ran from the Sacramento City Council chambers weeks ago when none other than Stevante Clark led protestors into the chambers before she was to speak.

She’s also cancelled several community speeches, and this week confirmed she probably won’t be attending a sponsored community debate with her challenger Noah Phillips – who works as an assistant D.A. in her office. The National Lawyers Guild/Sacramento Chapter and the American Civil Liberties Union of Sacramento County are sponsors.