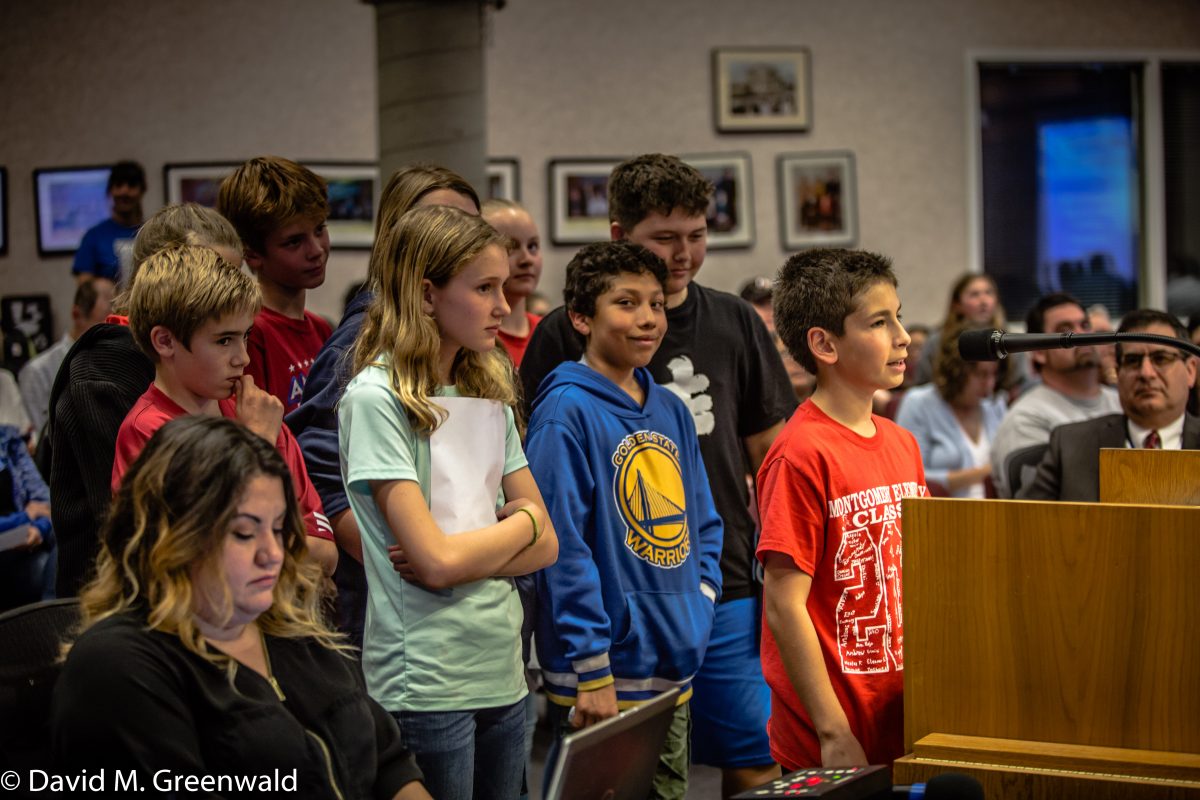 Lito Hanson spoke to the school board last Thursday, flanked by about eight of his 6th grade classmates at Montgomery Elementary.  They called on the district to provide a continuation of their two-way bilingual program at Harper Jr. High.

“We’re calling for a program that better fits our needs as SI students and the needs of native Spanish speakers,” he said.  “I think that we should have a class, like the one at Emerson that is what we’ve been working on in class for seven years, in Spanish immersion.”

Laura Giron, a parent of a bilingual education student, submitted this to the Vanguard in writing:

I want to quote the late Professor Francisco Alarcon, the then Director of the Spanish for Native Speakers Program at UCD.

“Historically enrollment by Spanish-speaking students in Spanish-as-a-second-language courses throughout the United States has been low. Many native speaking students are uncomfortable beginning more formal study of the Spanish language and often do not take advantage of their own linguistic assets. There should be no reason for native, near-native, or comfortable speakers of Spanish to study Spanish as if a foreign language.

“The language learning needs of Spanish-speaking students are not uniform. Some have lived amidst the spoken language all their lives and intuitively feel the rhythm, tones and inflections of the language which other students, raised in non-Spanish-speaking environments, often take years to master. Others speak well, but are unsure about writing and have some difficulty reading. Still

others speak and write fairly proficiently but want to brush up on the more formal structures of the language and perfect their writing styles.”

In order to meet the linguistic needs of bilingual students who are already comfortable with spoken Spanish, UCD has been filling a gaping hole in middle and high school education throughout the country, including right here in Davis, by teaching the Spanish language arts to these learners.

Earlier this week I spoke with a mom of two MME regular curriculum kids who attempted to study Spanish in high school taught traditionally as a foreign language and it was a total flop. She shared, however, that when she went to college and was able to enroll in a course on Spanish for native speakers she excelled.

Our little group of advocates only came to understand the depths of this on our journey to secure the continued language development of our SI students, who we all worry will risk losing their hard-earned Spanish capacities if their language learning is not continuously cultivated next year at Harper. However, as we dug deeper we came to realize that the manner in which this is handled from here out by DJUSD is a matter of equity with potentially long-lasting ramifications on the academic success of your heritage-speaking student body.

My son and his friends informally interviewed some of the Heritage speaking 6th graders about their plans to study Spanish at Harper and the majority expressed fear to enroll because their Spanish may not be grammatically correct or adequate to warrant a good grade in the class. It is our opinion that these children deserve a curriculum that is geared towards their strengths and weaknesses just as the SI kids deserve. In order to come up with and execute a great program, we must understand why heritage speakers are hesitant to study Spanish.

By the time these kids reach Harper the student body is 26% Latino – higher than Holmes’ 18% and Emerson’s 22%. What we don’t know is how many of the students are experiencing hardship by trekking across town to Emerson and would more logically be Harper’s kids.

What we are asking for is appropriate Spanish instruction to be offered at Harper that is geared to the needs of both heritage Spanish speakers and SI kids, beginning as soon as the 2018-2019 school year so these kids can study and master Spanish language arts alongside one another.