This week, including today, the Vanguard has been publishing the extensive answers to the Sierra Club questions, including the first set on land use issues.  If you haven’t read the survey in full, it’s lengthy but will give you a good sense of the candidates.

Two years ago, there were four candidates for three spots and they all basically agreed on land use issues – which I don’t think served the community well and certainly didn’t represent the vast variety of viewpoints within it.

This time we have a much greater mix. 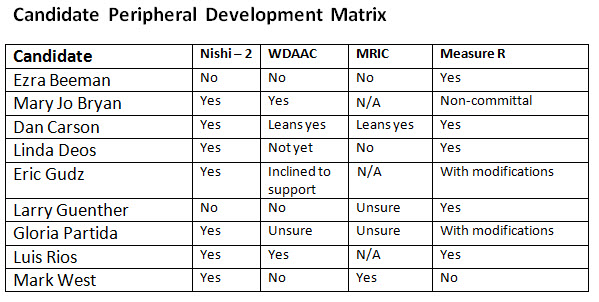 Understandably there is a greater level of nuance with projects that have not reached final form, so we have a clearer sense on Nishi and Measure R than on the West Davis Active Adult Center and MRIC.

Mary Jo Bryan is non-committal: “For me the General Plan Update and the 2020 voter decision about Measure R share similar timelines, and also should share a similar future.  They both need broad

“We are updating our General Plan because our society and community are very different now than they were in 2000-2001.   What our citizens feel about those differences must inform both the General Plan Update and the future of Measure R.”

Eric Gudz stated: “We should consider some adjustments that give project proponents a better idea of what kind of development we want on our periphery– like setting certain standards for projects to qualify for a Measure R/J vote. Our development must remain community-driven but we also need to work to reduce uncertainty by updating the general plan with stronger guidelines we can follow and better communication with project proponents. In Davis, I think we can do both.”

Gloria Partida explained: “I think that measure J/R was needed when voted in but I do believe it needs to be modified. It has now caused a shortage of housing and I believe that when it comes up for renewal it will not pass and we will be unprotected against poorly designed growth. The modification I propose is that we draw a line with well delineated metrics around what the building should contain. If projects do not meet these metrics then the project would go to a vote. We should also delineate as part of the modification where and how much we should grow.”

Clearly, as the candidates have progressed in this campaign their position on Measure R/J has become more refined.  While some have tried to pin candidates to early answers, I think these are probably most indicative of their current positions.

I want to shift now to positions on the large apartment complexes rented by the bed, because I think there are a lot misconceptions embedded in these answers.

For example, both Ezra Beeman and Mary Jo Bryan express opposition to “student-oriented housing being built far from campus.”  This is a clear shot at Sterling apartments.  As Mary Jo Bryan put it,

“The Sterling apartment complex is almost two miles from UC Davis and should have been approved for traditional apartments available to both students and Davis residents.  With rents so astronomically high and vacant rates so low for all renters, a rent-by-bed concept at that location did not meet the housing need for Davis.”

We have addressed the point numerous times, but even at Sterling, the vast majority of residents will either bike or take the bus to campus – not drive.  So I’m not sure that the distance from campus is a meaningful metric here.

In terms of bed rentals, I think Dan Carson makes the point, “As a parent of three young adult children, including two relatively recent graduates and one student now in college, I know firsthand that such living arrangements are a practical solution for rental housing for students.”

He notes that “such arrangements mean a student need not worry about finding co-renters to secure an apartment that is affordable for them.  It also means that a student or their family is not liable for the failure of co-tenants who fail to pay their rent.”

As a final point in response to Ms. Bryan’s answer, she points out the high rents and low vacancy rates, but regardless of the rent-by-bed concept, rents are going to, for market rate units, price families out of the rental market.  It’s an important point that we need to address, but that is not a flaw with the bed lease concept, which is designed for efficiency and could actually help to reduce vacancy problems and will not increase them.

Gloria Partida writes, “I think this is good for students but should not be wide spread. I do not approve of a bathroom for each bedroom. This makes for longer showers.”

Larry Guenther also argued that this promotes the waste of resources, especially water and energy.

There is no evidence to support to notion that individual showers will lead to waste.  First of all, a good percentage of these rooms are shared, and therefore the showers are shared.  Second, as we have pointed out, people really do not use more water based on availability.  They might use more water if the apartments are unmetered – which almost all are in Davis.  Third, the biggest use of water is outdoor use and apartments don’t have large outdoor spaces.

I put together a matrix to chart the candidates’ views on rent by bed: 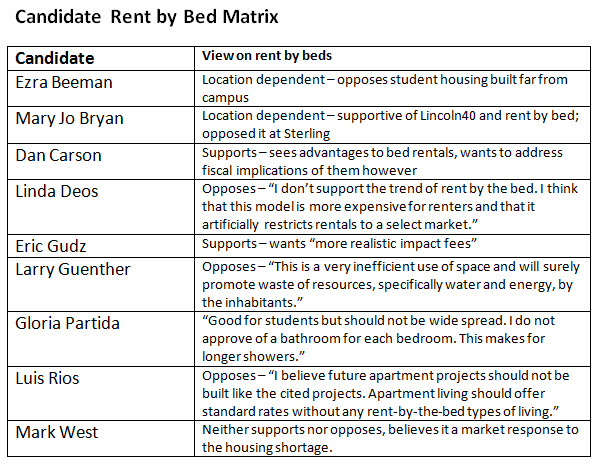 Finally the issue of UC Davis on-campus housing was huge at our forum – in fact, there was no mention of Nishi and the focus was really on hammering UC Davis for lack of housing and lack of affordable housing.

The bulk of the candidates, if they did support a specific number, specified 50 percent as a goal.  The current target is 48 percent.  However, four candidates did not specify the amount.

The vast majority wanted some sort of pressure and process in place.  Some argued for a “binding agreement.”  Others suggested the city “civilly pressure the university” and establish dialogue.  A couple of candidates – Linda Deos and Larry Guenther – suggested a last resort of a lawsuit.

The one candidate who had a wholly different response was Mark West, who stated, “Davis is the host city of a major university and is responsible for supplying the opportunity for appropriate housing for the faculty, students and staff. We should be focused on our own housing shortage and not worrying about someone else’s.”

I created a matrix to chart the candidates’ views on the amount of UC Davis on-campus housing. 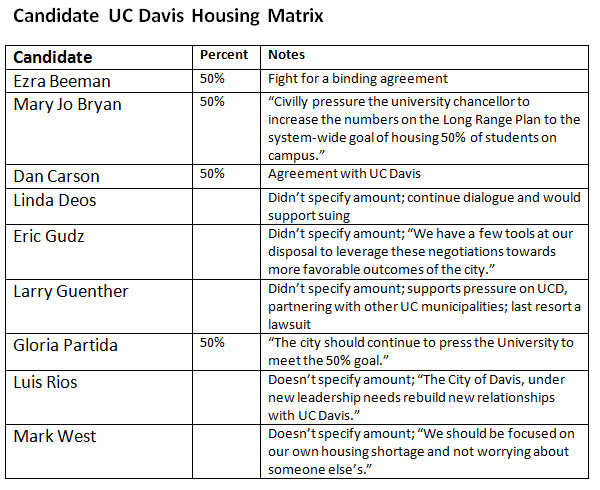 Hopefully, for land use, this can help the voters understand the separation on the various issues.

One thought on “My View: Taking a Closer Look at the Council Race on Land Use Issues”