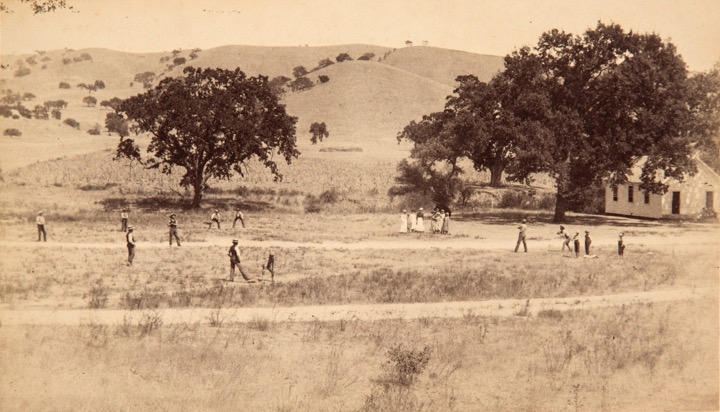 [DAVIS, Calif., May 6—] Central Valley Vintage Base Ball (CVVBB) is hosting a free afternoon of 19th Century baseball on Sunday May 13th at Civic Center Park, behind Davis City Hall. CVVBB plays baseball by 1864 rules, striving for historical accuracy as well as fun. People of all ages, races, genders, and skill levels are welcome to participate or watch.

1864 rules baseball differs from the modern game in a few key ways. Instead of gloves, players simply used their hands to catch batted balls, pitchers throw the ball underhand, and the umpire stands off to the first base side of home plate instead of behind the catcher. The early game also uses the “bound rule,” which means if a fielder catches a ball after it bounces only once, it still counts as an out, making it easier to catch the ball without glove.

CVAVBB channels the long history of the game in the Central Valley. The first organized club in Sacramento was formed in November 1859 and the first recorded game took place a year later between Sacramento and the San Francisco Eagle Club. By the 1880s, local clubs had sprung up in Davis, Woodland, Dixon, Stockton, and surrounding cities.

The Central Valley also holds a place in baseball history because it was one of the stops on the nationwide tour of the 1869 Cincinnati Red Stockings. They played, and beat, the Sacramento team on their way to an undefeated season that marked the beginning of professional baseball. Playing baseball by 1864 rules connects the present day to the past in a way that’s both informative and fun.

Founder Matt “Brandywine” Stone is a marine scientist who fell in love with the vintage game after joining an 1864 rules league when he lived on the East Coast (Hence his nickname). He never played baseball until his 30s, but fell in love with the culture, history and comradery with his teammates. When he moved to the Central Valley, he realized this style of baseball wasn’t being played and it’s been his mission to get it going ever since. He hopes to eventually have enough players to organize local teams throughout the region, the way it was set up in the late 1800s.

He emphasizes that CVVBB is an association and not a league, meaning the games are more about having a good time and celebrating the history than winning and losing. This makes it a welcoming place for anyone who is interested in the game of baseball and its history.

For more information on the event or how to participate as a player, umpire, scorekeeper or historian, contact Matt “Brandywine” Stone at CentralValleyVintageBaseBall@gmail.com and visit Central Valley Vintage Baseball on Facebook.