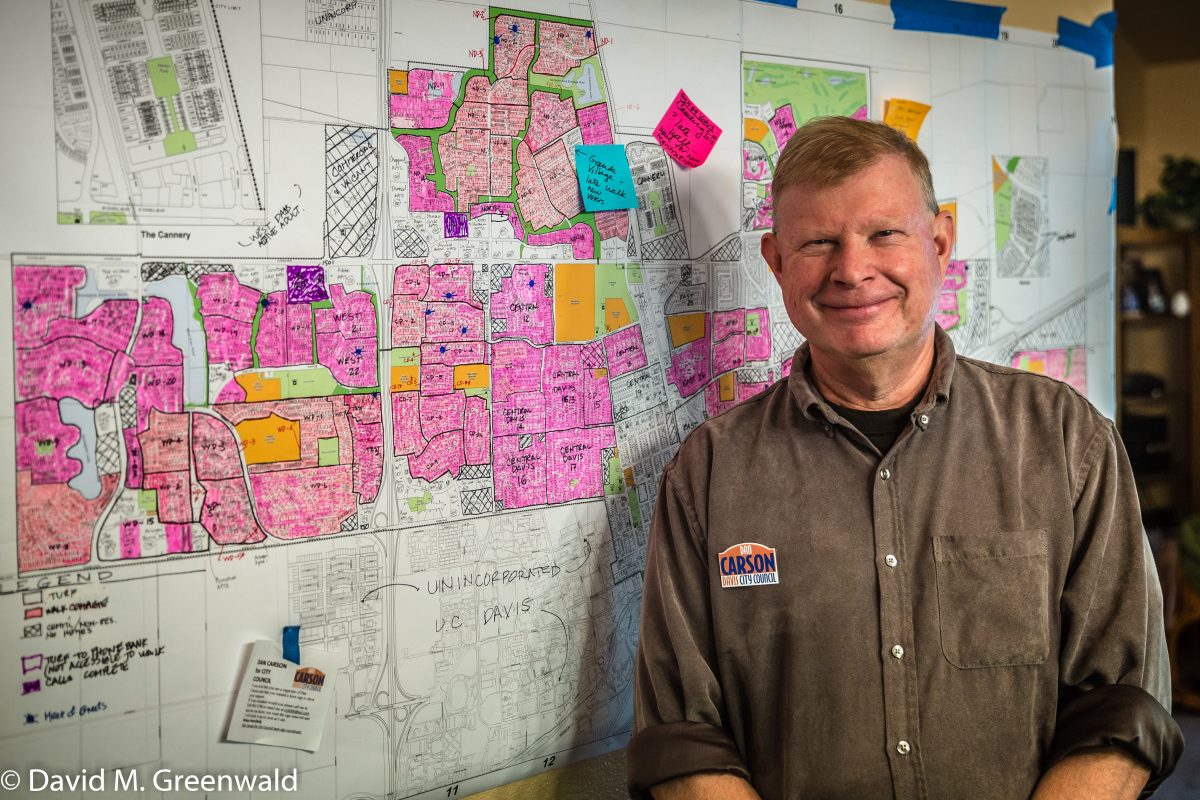 The most recent money figures are in and the race seems to be about where it has been for the last few months.  It appears that Dan Carson has a commanding lead.  He certainly does on the money side, having raised nearly $40,000 – all by way of contribution.  This would appear to be the most money raised in any council race since 2008.

The question as always is whether money will translate into votes and it has been our view that most candidates in Davis do not need to raise more than about $20,000.  But Mr. Carson has shown a broad base of support as well as an organization that has walked the vast majority of Davis precincts.  Add it all together, and he heads to the election as the presumptive frontrunner.  In a week, we will see how the votes align.

If Mr. Carson is the leader, the next three would appear to be the women in this race – which has been our expectation for some time.  With Rochelle Swanson not seeking reelection, there is a

danger of an all-male council – however, we believe that the second place finisher will most likely be female.

For some time, we have seen Linda Deos as having a slight edge over Mary Jo Bryan for second, but Gloria Partida is still a possibility as well.

Ms. Deos raised $4470, but $2500 of that was a loan to herself.  That helps to account for most of the margin from second to fourth in terms of fundraising.  Mary Jo Bryan has loaned herself a very modest $684 while Gloria Partida has not loaned herself anything. 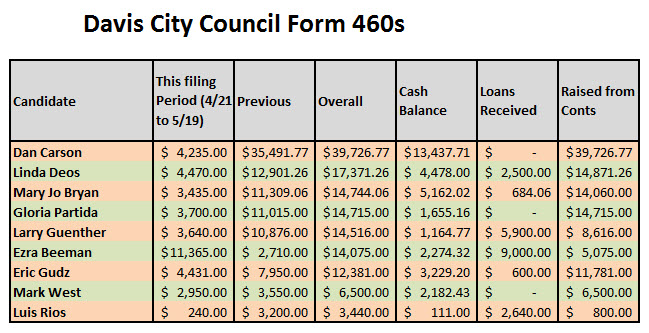 Ezra Beeman, therefore, has raised less money from contributions than anyone other than Luis Rios in this race.  Mr. Beeman of course started late, has continued to go out of town for a demanding job, and has missed two of candidate forums, with Colin Walsh standing in for him.

Our view at this point is that Mr. Guenther and Mr. Beeman are still in this race.  Their best hope is a strong finish by the opposition to Nishi, which would carry them to victory – being the only two candidates opposing the current iteration of this project.

Is that a likely scenario?  We are not seeing evidence for it at the moment.  There is not much to show that the candidates have a lot of support outside of their immediate base.  But in an election that goes nine deep, the split will matter greatly.

There is still a wild card here and that is Eric Gudz.  The bad news for Mr. Gudz is that the student vote – at least right now – is not appearing to materialize.  The Nishi and Gudz campaigns have had a strategy of registering young people to vote, signing them up with absentees, and getting them out to vote by mail because the election is during finals week.

One problem: by our count, the students have registered to vote in decent numbers, but the absentees are not coming in.

The good news for Mr. Gudz is that his money is solid.  On paper, he has raised just over $12,000.  But that figure gets more impressive when you realize that all but $600 of that is from contributions.  That means that he has actually raised the fifth most from contributions alone.

Mark West appears to be headed for eighth.  He has raised $6500, all from contributions.  He got a boost of sorts from the Chamber endorsement, but in a race where there are other stronger candidates who are fiscally solid and pro-housing, we think Mark West is a long-shot at this point.

Finally, we believe that Luis Rios is a distant ninth.  Ne has only raised $3440 for the entire campaign (less than all but one of his opponents did in the last filing period).  But only $800 of that is from contributions from others.  He simply has not shown himself to have a viable campaign.

Our view in general is that, while money is important, for the most part money in Davis does not win elections.  You need enough money to do a mailer, a walk piece, signs, advertising, and a few other expenses.  More important is that money shows support.  If you are loaning yourself large amounts of money – then you are not showing you have broad support.

So, all things being equal, the candidate who raises more money from contributions is showing more support and more of a campaign organization.

Headed into the last week we see four tiers of candidates:  Dan Carson as the presumptive frontrunner; Linda Deos, Mary Jo Bryan and Gloria Partida as the next tier challenging for second; Larry Guenther as the third tier; and Ezra Beeman, Eric Gudz, Mark West and Luis Rios in the fourth tier – although you could argue that Eric Gudz should be in the third tier.