While the consultants from EMC Research did not recommend running a parcel tax concurrently with a facilities bond, they conducted a 400-person poll from April 18 to 24 and found that there was sufficient support for a facilities bond that the school district could consider as an avenue for addressing school facilities needs – which is a separate pot of general fund money which can only be used for instructional purposes.

The purpose of the survey was “to identify the level of support for a potential $150,900,000 bond measure for the November 2018 ballot, to provide funding to upgrade school safety and security systems and update classrooms and other academic facilities.”

Their findings included: “Voters continue to recognize the high quality of education provided by Davis public schools, and they rate the quality and safety of schools and grounds positively as well.”

Unlike a parcel tax, a facilities bond takes a 55 percent vote.  They found that support was above the 55 percent threshold for passage, “but total support is something soft.”

They found, “Among voters, modernizing classrooms and labs to meet current academic standards and basic repairs to keep schools in good condition are high priorities for bond expenditures.”

They further found, “Reassuring voters that all funds will be spent locally on Davis schools and that funds will modernize classrooms and bring school facilities up to date helps solidify support for the measure.”

In general, the majority of the voters are optimistic about the direction overall.  They found 69 percent believe that things are headed in the right direction, which is somewhat higher than the 64 percent who expressed that view in February of this year.

Two thirds of the voters now say there is at least some need for additional funding for Davis public schools.  Only 56 percent said that in February.  It is unclear what triggered that view, but perhaps the prolonged discussion over teacher compensation was a factor.

The one area where the district is dinged is management of district monies, where only 42 percent believe it is excellent or good.  Then 37 percent say it’s fair or poor.  Another 21 percent of voters don’t know.

The survey asked this question: “To upgrade school safety and security systems, update classrooms, science labs, innovation labs and facilities to meet current academic standards, and equip classrooms with twenty-first century learning technology, shall Davis Joint Unified School District issue $150,900,000 in bonds, at legal interest rates, raising an average of $10,000,000 annually to repay bonds while they are outstanding, at an estimated rate of $60 per $100,000 of assessed value, with citizen oversight, annual audits, no funds for administrator salaries, and funds staying local?”

They found overall there was 67 percent support, to 30 percent against.  But that includes “leans.”  They broke it down and found 58 percent solid support with 9 percent leaning yes, versus 27 percent a solid no and 3 percent leaning no.

They conclude: “Initial support for a bond measure is above the 55% threshold needed for passage, but total support may be somewhat soft.” 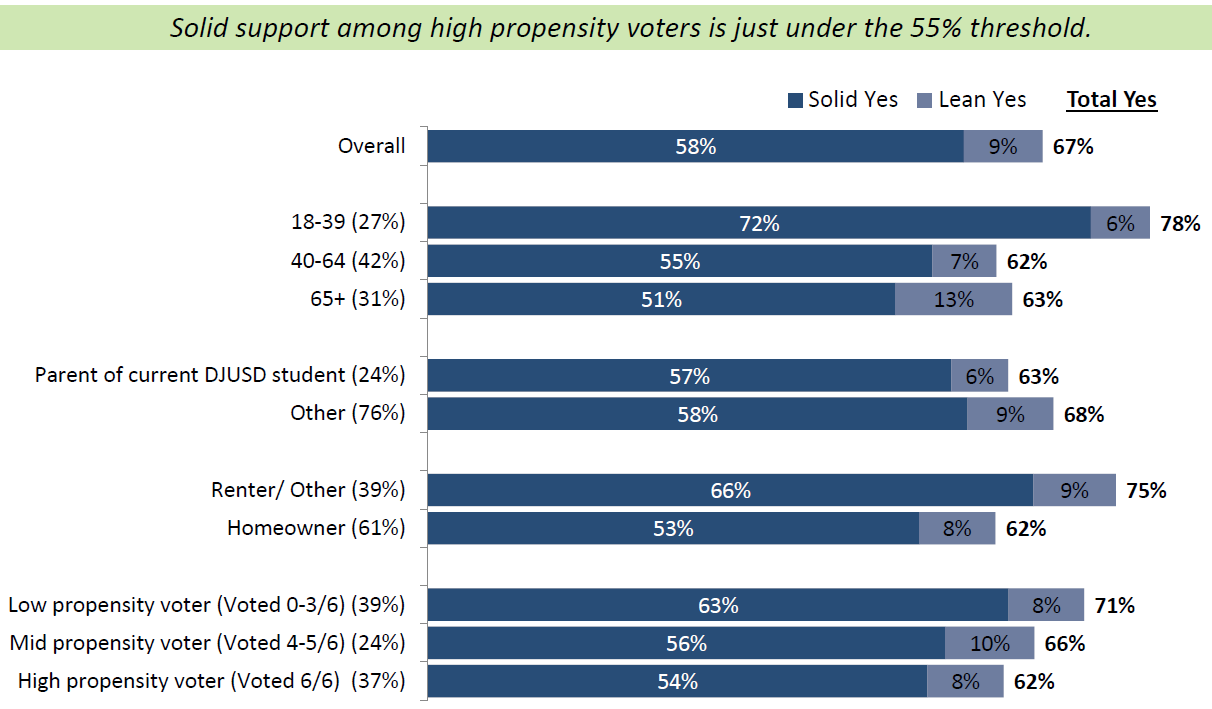 They are a little more concerned here, where they found that support among high propensity voters is just under the 55 percent threshold.  Their recommendation therefore was that the district hold this in a November general election where medium and low propensity voters are more likely to vote.

These are components the public is willing to support.

This shows they are more likely to support technology in the classroom, but less likely to support things that appear to be extras.  Support for an aquatic facility is below 50 percent for instance, but upgrading earthquake safety, improvements of athletic fields, and multipurpose space are around 60 percent, with less than a quarter in most cases viewing it as extremely important.

The strong measures of support: “Voters react positively to messages about the revenue staying local, upgrading aging buildings, and modernizing classrooms and labs to keep pace with today’s standards.”

They find support for: “Good schools are part of what makes our community a desirable place to live. By keeping our schools strong, we maintain high property values in the Davis area.”

They find support as well for a citizen’s oversight committee (76 percent) and around 60 percent agreement for the notion: “There is nothing more important than protecting our children while they are at school. This measure will upgrade essential school safety and security with fencing, security cameras and access control.”

They also found concerns that work, including the fact that the district just passed a parcel tax, and the lack of deductibility of the local taxes.  There was some support for: “Taxes in our area are already high enough. We should reject this measure to prevent tax increases for local homeowners.”

The board took no action at this time, but they are looking at a possible parcel tax as well as the facilities tax.

Share:
Tags:DJUSDFacilities Bond
Previous : Sunder to Move, Leave the Board
Next : Gudz Sleeping in His Car This Week to Raise Awareness for Homelessness and Housing Insecurity of Students