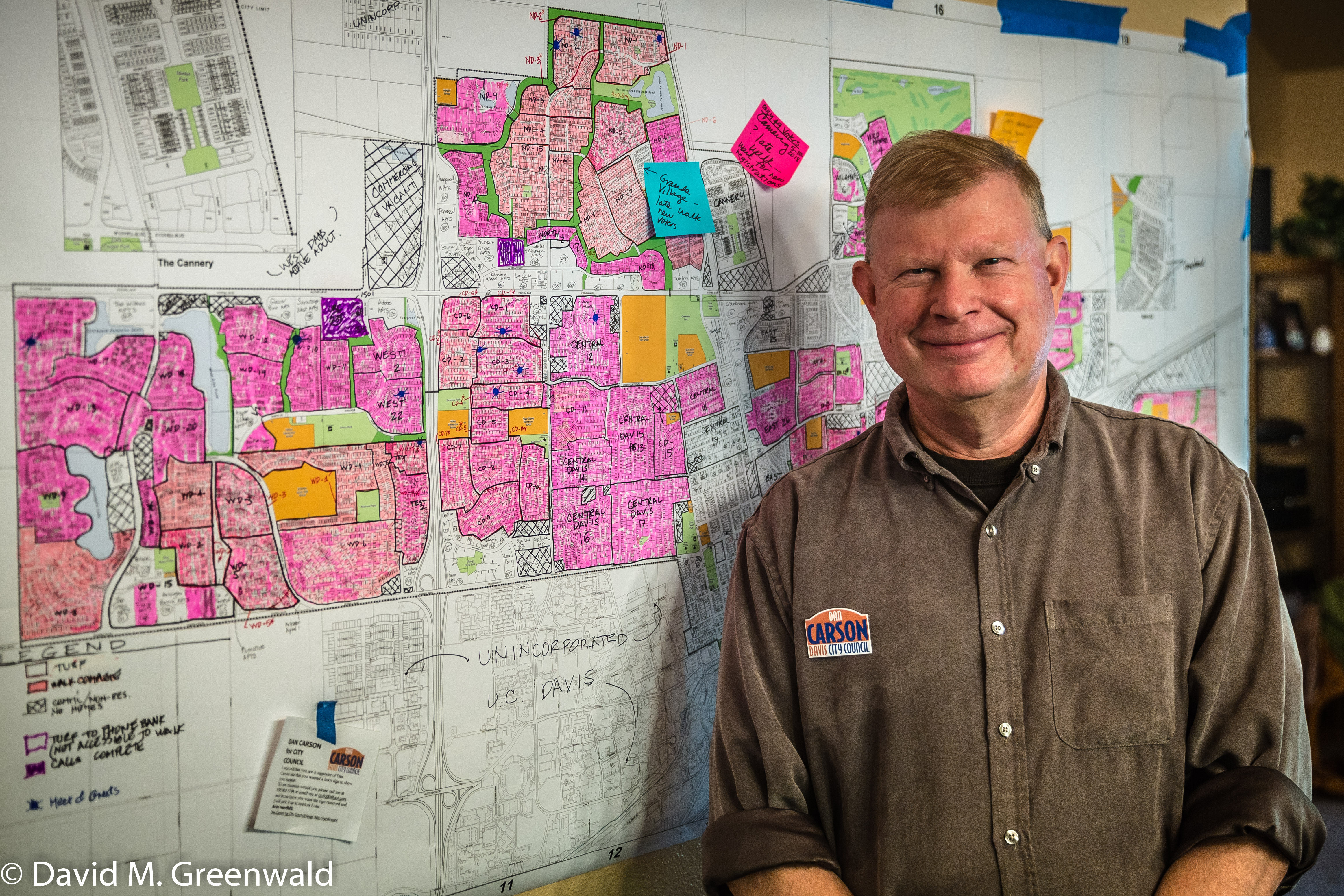 Dan Carson began his career as an investigative reporter for the San Diego Union, covering local government and then the state capital for a decade.  Toward the end of his time, he went back and got his MBA from UC Davis.

“I came to realize that if I was going to put three kids through college, the newspaper business was not going to support that,” he explained.  So he shifted gears to work for the Legislative Analyst’s Office (LAO) – a non-partisan fiscal adviser to the state legislature.  He would work there for 17 years until he retired.  He came home to take care of his 14-year-old at the time, as his wife became planning director for the city of Vacaville.

During his retirement, he read about the city’s financial problems.  Believing he could help, he sought and received an appointment to the city’s Finance and Budget Commission.  He has served for four years and became chair this year.

Dan Carson believes his prior career has helped to prepare him for the job of being a city councilmember – should he be elected.

“Part of it, I know how to ask tough questions,” he explained.  “I know how to insist on getting answers and I know how to take that information and digest it and translate that into action.”

In journalism school, he learned that there “two sides to every story.”  However, when he was sent up to Sacramento, covering the peripheral canal issue, he quickly learned, “What I learned in that

experience is there’s five to seven sides in every story.”

He explained that there are a lot of people who are comfortable coming down to city council meetings and speaking out.  “You have to reach out to people who aren’t going to show up,” he said.

When he was at the LAO, he had responsibility for every policy that was not education.  “That policy background, I think, is very useful,” he said.  “It’s about more than the money issues that we will be facing in the city.  The most important issue that we might be dealing with may be and probably will be some issue that we aren’t even aware of right now.”

One example was work he dealt with, on mental health issues at the LAO, he feels will help prepare him to address homelessness issues.

“I’m not going to stand up here and say, I’m going to solve homelessness,” he said. “But I think there are things as a city we can do in collaboration with the county and our non-profits to make things better.  Having that policy background is very good for your next background.”

As a journalist, he learned that “programs do not always work like they say on paper.”

As a young reporter in San Diego, he spent time covering a city-home rehabilitation program.  “It was dysfunctional,” he said.  “It was letting contractors go into people’s houses, rip them apart to shreds, and let them walk away without any consequences.  Leaving these poor folks, many of them poor, many of them with limited English speaking skills, to try to fend for themselves.  I’m proud of the work I did exposing the mess forcing the city to do audits and clean up that mess.

“The underlying lesson though was that you have to pay close attention to the details and have an ongoing oversight of programs because things don’t always work out as intended,” he said.

The map behind him in the photo shows the extent to which Dan Carson has walked the city of Davis.

“We are on track… to complete our walk program by June 5,” he explained, having knocked on thousands and thousands of doors.  Each stop has allowed him to ask what the big issues are that

concerns them in their neighborhood and the city as a whole.

“I have learned more from talking to retired engineers about how asphalt work should be done in this town.  There is a lot of incredible wisdom and knowledge out there about things like that,” he said.  “I have found that the big underlying concerns are about the two issues that I have been running on.”

Dan Carson has focused his campaign on getting the city’s fiscal house in order so that the city can fix Davis’ roads and bikepaths.  He has also focused on “getting a better two-way relationship between the city of Davis and the UC Davis campus which can help us deal with traffic, housing, and parking and other problems.”

“There are a lot of concerns out there on both of these issues,” he said.  “I feel like it’s resonating in every neighborhood we’ve walked in.

“These are cross-cutting issues for everybody,” he said.

Dan Carson recalls a situation where he was walking on Grande and asked folks what issue was concerning to them and, at a number of homes, they were concerned about the turkeys.  In fact, it wasn’t just some – it was seven of them.

The funny thing is that they were split on what to do about the turkeys.

“Three were for the turkeys, four were against the turkeys,” he said.  So even within that issue they were split.  Making a journalism joke, he quipped, “I didn’t get a chance to get a response from the turkeys, even though there were a lot of them around.”

Overall, Dan Carson, like several of the other candidates we have talked to, remarked, “What really surprised me is how much energy I’m drawing from the conversations I’m having at the door.”

In the past he had walked precincts for issues and candidates and viewed it as “a necessary evil and drudgery.”

But walking for himself has been a different experience as he has found the experience to be overwhelmingly positive.  It’s not that everyone is going to support him.  “I’ve been able to engage at the door in fairly sophisticated discussions that at times surpass the discussion that I have heard at the city council and commission meetings.”