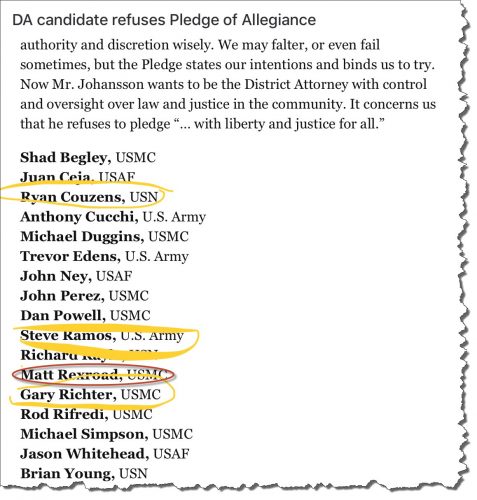 A few days after bringing up unproven allegations from an 11-year-old incident involving the DA challenger’s children, supporters of DA Jeff Reisig, who appears locked in an unexpectedly fierce fight for reelection, are now attacking DA Candidate Dean Johansson for… refusing the Pledge of Allegiance.

In the letter, written by 17 purported veterans, most of them law enforcement, all of them men, they write in a letter in the Enterprise: “As veterans in Yolo County law enforcement and elsewhere, we respectfully ask why District Attorney candidate Dean Johansson will not say the Pledge of Allegiance.”

They explain: “In a Woodland campaign debate, Mr. Johansson refused to say the Pledge during the opening ceremony. We appreciate people’s views on the Pledge may differ. Some choose not to utter the words ‘under God,’ and a private person’s choice not to say the Pledge at all is their business. Mr. Johansson, however, is now a candidate for public office and the Pledge raises relevant issues.”

As one person wrote: “This is particularly troubling for me because I have attended the Friends Meeting House with Dean and if there are people out there who are attacking Dean for what I would assume would be Dean’s religious beliefs, that is reaching a new level of unacceptable that I thought this campaign had already exhausted.”

Quakers as a rule DON’T “take oaths in court or take any kind of loyalty oath or pledge of allegiance.”

Of course, then again, what is interesting for me is not only that this has become an issue, but who has signed the letter.

First you have Supervisor Matt Rexroad.  Supervisor Rexroad, a veteran, has also been an outspoken supporter of incumbent Jeff Reisig.

More interesting are some of the police and one of the Deputy DAs on the list.

You have Steve Ramos.  Sgt. Ramos of the Davis Police Department was one of the three police officers involved in the Picnic Day incident.  He was the officer who was in the rear passenger seat

that seemed to trigger the melee.

Then you have Gary Richter.  Mr. Richter has been a controversial member of YONET (Yolo Narcotic Enforcement Team) for a number of years and was at the centerpiece of the Paul Fullerton case and other matters.

Finally there is Ryan Couzens – who has emerged as a lightning rod in this campaign.  Mr. Couzens not is only is a Supervising Deputy DA but has been the right hand man for Jeff Reisig in this election.  It was his letters to the Johansson campaign last week that were at the center of the campaign sign issue and possible legal threats.

Moreover, Ryan Couzens has been notorious for years in his courtroom antics.  Many of these courtroom antics have been captured on the Vanguard over the years.   Last year in a column, I wrote, “Why focus on Mr. Couzens?  We have been covering the courts for eight years – and he is the deputy DA that is most over-the-top, not only in his prosecutions, but in his demeanor and arguments.”

We take you to the case of the Kalah family from 2011.

The police and Prosecutor Ryan Couzens had conducted six months of surveillance on a compound owned by several generations of an Asian family in West Sacramento.  They were suspected of being gang members who were selling drugs to fund their criminal enterprise.  However, when authorities raided the property, the results were less than impressive.  Police found pills that turned out to be caffeine pills, powder that turned out to be Ibuprofen, and 1.4 grams of methamphetamine.

But that didn’t stop Mr. Couzens from prosecuting three generations of an Asian family on drug dealing and gang charges that put them in jeopardy of decades in prison.  By the time the case got to closing arguments, charges were dismissed against one of the elders and two others would be acquitted, with a hung jury on the two younger members (with acquittals on the gang charges).

In our eight years of covering the courts, this was one of the most overcharged cases which involved considerable public expense.

But Mr. Couzens doubled down on the use of felony and gang charges in this case, launching into a manifesto during his closing remarks.

He called this a gang that was selling drugs (the jury acquitted the family on gang charges).

He admitted to the jury that he is very aggressive about gangs and crimes.  He said the same for his office.

He admitted that they did not find evidence of a huge drug operation.  That they only found 1.4 grams of meth.

The DA’s race should be about the future direction of the District Attorney’s office and, instead of having a robust but civil debate, we have had the DA and his surrogates launch a 20-year-old attack against Johansson for what transpired in Tulare County when he was a deputy DA, an 11-year-old attack for something that may or may not have occurred in his home, and an attack for not pledging to the flag, when his religion precludes it.

For those wondering about all of this – this demonstrates the character of the DA.  This is reminiscent of the closing days of the 2006 campaign between Jeff Reisig and Pat Lenzi, when an automobile accident became fodder for attacks against Ms. Lenzi.

Is this really what we want – petty political attacks – or would we prefer robust but clean debate over policy?