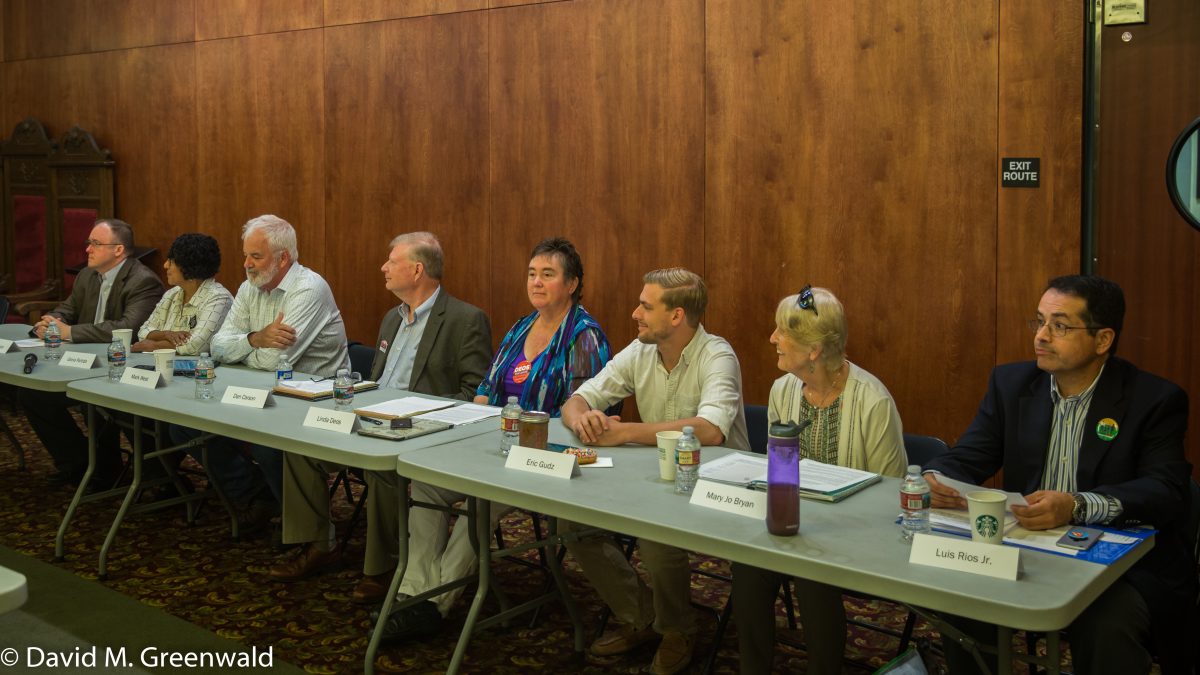 Most of the candidates showed up to a morning candidate’s forum at the Odd Fellows Hall put on by the Yolo County Association of Realtors.  Ezra Beeman, however, was unable to make it, and Colin Walsh sat in for the second time for him.  Larry Guenther also could not make it.

The fourth question was what do you believe is smart housing growth for Davis and how will you fight to achieve that?

Luis Rios – The city of Davis is a medium sized city – although I really consider it a small town character.  I like that.  That’s why I’m raising my children here.  We need to think about smart growth and smart growth housing building.  How do we do that?  If I get elected, I will convene a group of realtors, yourselves, stakeholders, developers, community members, even parents with children who want to live here.  We need come together and say, ok, what do we do, what do you do?  We all have to make a living.  Families have to make a living.  Families want that American Dream, they want to purchase a home just like everybody else.  So let’s think about a whole community approach to how we do this.  How do we get there?  That’s the question.

Mary Jo Bryan – It’s the main part of the platform of why I’m running.  I started off with controlled growth and I went to balanced and managed growth.  I think smart growth is balanced and managed growth – where are the balances right now?   Currently with our general plan being up for renewal I think it’s a perfect opportunity to bring together the citizens of Davis and a citizen’s committee to determine the policy needs of Davis because only by determining the needs of Davis, can we go forward with a plan.  I have been thinking about this for quite awhile now, and I think there’s a possibility of developing the kind of housing options that would bring forth the kind of middle housing that we need and what we want.  It will be different from what we bought back in the 70s and 80s, but it will be affordable mostly in the price range today that most of us probably can’t afford.  We need to be serious about this, we need to develop a housing need

Eric Gudz – We have to take a very very very serious look at the zoning and the way that we’re utilizing every single parcel of land in the city of Davis.  An entire scan of all of our land use, all of our zoning, all of that needs to be re-examined when we have our general plan coming up.  That’s first and foremost.  That is going to give us a whole lot of insight as to what parcels of land, what zoning is working for us as a city and what type of zoning is not working for us as a city going forward.  That’s more on the policy wonky side.  The other side is we need to increase the diversity of housing options that are available for our citizens and for those future citizens in Davis.  This is thinking about not just the difference between single family homes and multi-family homes but thinking about the variants we can introduce in multi-family homes and single-family homes.  Thinking about whether it’s granny-flats, whether it’s providing incentives for current landowners to be able to add a little density to their house with granny-flats, whether it’s thinking about micro-home development, whether it’s thinking about project proponents building more flats -one bedroom, two bedroom.  Providing more of the affordable by design elements within some of our mixed-use in downtown for instance is an option as well.

Linda Deos – What is smart growth?  Smart growth is responding to what the community needs now and what we’re going to need in the next 20, 30, or 40 years.  I’m looking forward to what that is going to be.  Look at what’s around here, we have so many single-family homes.  Is that really the future of where we can go, because by having more and more single family homes, that’s going to require going out and out and out, to create them.  We as a community have decided that we don’t want that.  That’s not the direction of where we want to go in.  So what would be smart in response to that?  We’re going to have to look at downtown, we’re going to have to look at other neighborhoods, for building up.  We’re not going out, we’re going up.  The up is going to be apartments, the up is going to be condos, or its going to be stacked-flat condos or is it going to be tiny homes in an urban setting like you’re talking about for a homeless shelter.  Those are things we need to look at and zoning is going to be a part of that of course.  Are we going to incentivize as well in terms of getting the granny-flats onto the land.  I like what Portland has done where you have just three or four plans – of pre-approved granny-flat plans, and you can go in and say I want A, B, C and you don’t go through anymore process than that.  You can just move forward

and the fees are quite low.

Dan Carson – We have a conflict in this town between our values.  We value trying to address issues like the housing shortage and dealing with the affordable housing issue – which is a particularly huge concern.  But we also value preservation of agricultural land.  We value preserving open space.  We value trying to keep that small town feel that we enjoy.  Any project that comes before me that I will approve will have to meet three tests.  It has to be fundamentally sound land use policy.  So for example, if it meets the needs of our aging demographic, if it provides housing for works who are working here but are struggling to live here, if it meets the needs for students who are desperate for housing – that meets that criteria for me.  The second criteria is they do those environmental impact studies and the projects have to mitigate those impacts that they find.  If it’s a traffic problem – they’ve got to deal with the traffic problem.  The third test for me is that any project has to be fiscally net positive.  We’ve got an $8 million a year fiscal gap in this city between what would come on the natural and the money that we need to keep our quality services and all the rest – so we can’t afford to dig that hole any deeper.  There are projects that I’ve supported in the past that meet those criteria, I have not supported projects that did not meet those rules.  To me that’s what smart, sustainable growth is.

Mark West –  Davis has a general plan with a housing element, part of that has been in place for 20 years but we’ve been ignoring it.  It calls for all of our growth to come from infill.  Yet we spent two and a half years arguing over a 27-unit mixed-use apartment complex.  We’re not following the plan that the citizens put together for our future which was to build taller infill structures.  So if we’re going to argue about needing a new general plan, why don’t we just follow the general plan we already have?  What we need is more housing – we have residents in Davis that don’t have access to appropriate housing.  They just don’t and we need to correct that.  Our responsibility is to provide an opportunity for housing to all of our residents.  The way we can do that is by increasing our density – growing taller, putting more people together.  Downtown is a great place to do it, we have now, with ideas of redeveloping our downtown, an area with mixed-use construction.  Back in 1971, we set it at eight stories tall, maybe we don’t want to go that high but let’s at least look at utilizing high density housing opportunities to create housing for people.  It’s also important to know, disagree with Dan here, housing is not a source of revenue.  It’s at best revenue neutral.

Gloria Partida – For a long time we said we want density – so what are the barriers, why aren’t we doing what we say we want?  I’d like to see what it is that’s preventing us from doing the density and diversifying our housing stock.  Everyone says that mixed-use housing is a great thing downtown, I would like to see that in other parts of Davis as well.  We’re going to the point where we are becoming different communities – we’ve got West Davis, we’ve got North Davis, we’ve got South Davis. People want to stay around the places that we live.  If we had more dense, mixed-use properties in other areas besides downtown it would create hubs of community where people would congregate around.  I live in East Davis, I tell people if something’s happening in West Davis, it’s too far, I’m not going to drive five minutes to go all the way across town.  I look for people to really build community and build it around the areas where they live – then we have more walkable neighborhoods in all parts of Davis, not just downtown.  I’d like to see us do more homes that are smaller that diversify our housing stock.  I’d like to really take a look at the measure R/J…

Colin Walsh for Ezra Beeman – Davis is a really nice place.  Ezra likes to talk about that he grew up in the country just outside of town.  He would ride his bike into the city.  He would sell watermelons at the Farmer’s Market.  He’s been here a long time but his professional life took him out of town for a few years.  He came back to Davis because of the quality of life in Davis.  That quality of life has driven demand for the housing market and it has made housing expensive here because Davis is a great place to be.  It would be a tragedy to look forward in a way that sacrifices the quality of life in Davis.  We need to find ways to move forward that are inclusive of people, that have concepts like affordable-by-design housing, that provide good quality affordable housing – but doing it in a way that brings the character of Davis forward so that it continues to be a great place.  The housing element of the General Plan was just renewed in 2014, the General Plan will be looked at again.  This is the time for real soul searching in the community to look at the plan, Ezra wants that to be a strongly community-driven process where folks like yourselves and others in the community have a lot of input on the plan going forward.  With the new General Plan, hopefully we can move away from the zoning by exception that we’ve had over the last few years where there’s sort of a wild west where every project is outside of what the General Plan called for.