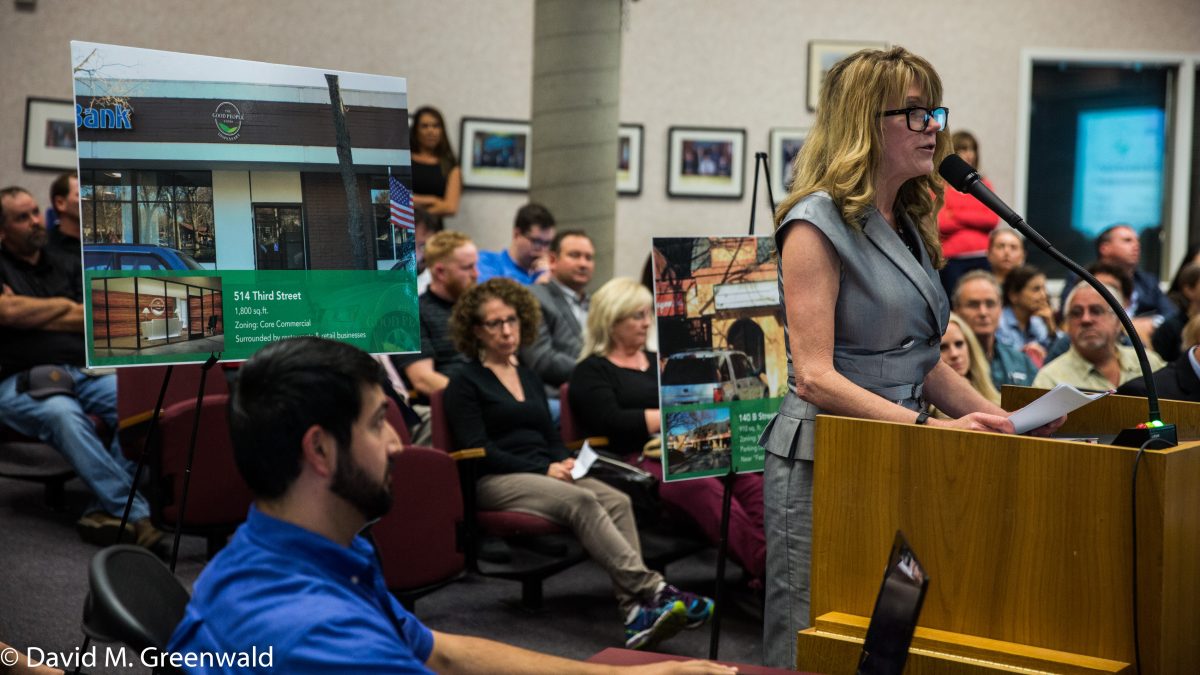 The Davis City Council on Tuesday watched as Rochelle Swanson recused herself, as her new business location now conflicts with one of the Olive Drive dispensary locations.  They then listened to ten impressive presentations by the applicants.

By the end of the night, they added the possibility of going with five instead of four dispensaries, eliminated two locations and set the stage for May 29’s final approval.  Gone from consideration was the Davis Cannabis Company, which did not have a representative show up to present their project, and the 140 B Street location for Good People Farms, as they had two locations and felt the 3rd Street location was the superior option. 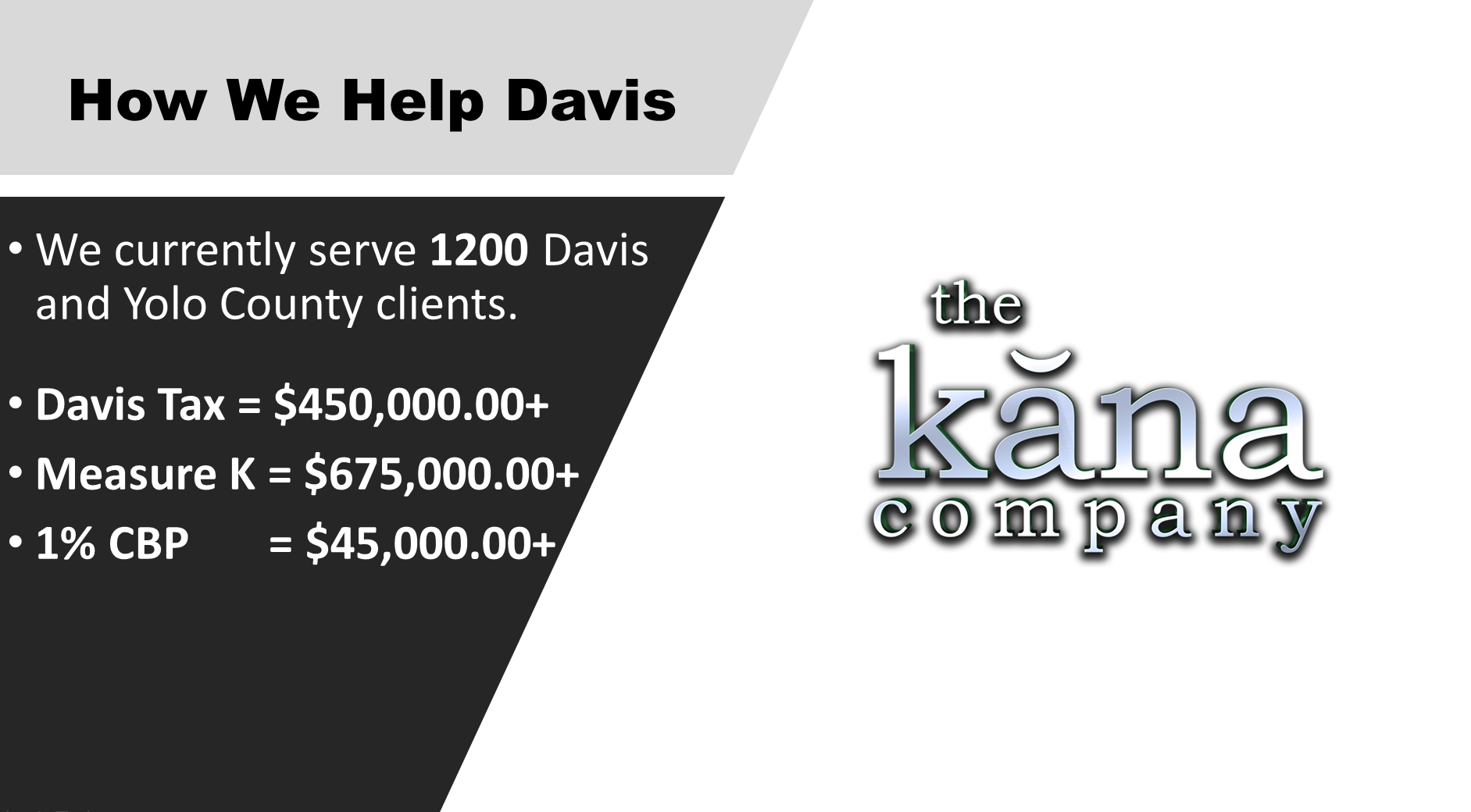 California Grown by the Kana Company, a husband/wife team with 20 years of industry experience, have an application for 1605 2nd Street.  They run three farms currently in Yolo County, with a combination of more than 200 acres.

Currently they serve 1200 Davis and Yolo County clients.  They project that, if approved, they would generate about $450,000 in Davis taxes, with about $675,000 if Measure K passes and an additional $45,000 each year with the inflator. 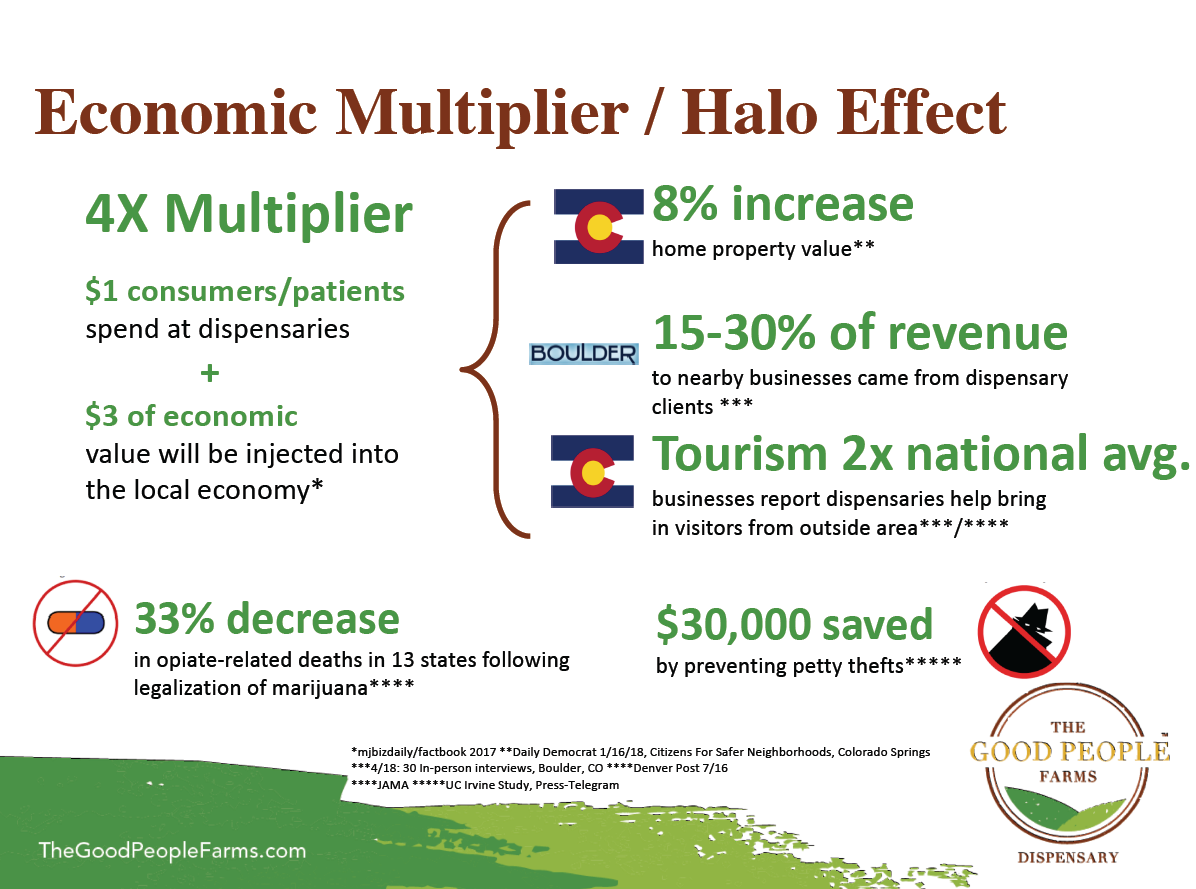 Good People Farms is applying for a location on 514 3rd Street, right next to Newsbeat.  The owner of Newsbeat, Janis Lott, came to endorse the project earlier during public comment.

In their presentation they talked about the Economic Multiplier and Halo Effect.  They argue that there will be a 4x multiplier effect – with every dollar generated by consumers which they spend at

dispensaries, there will be another $3 of economic value injected into the local community.

There is also a halo effect with a 33 percent decrease in opiate-related deaths in 13 states following the legalization of marijuana and $30,000 saved by preventing petty thefts.

Councilmember Will Arnold picked up on this point during his comments.  He said, “I reject this notion that somehow these dispensaries are going to be havens for crime.” 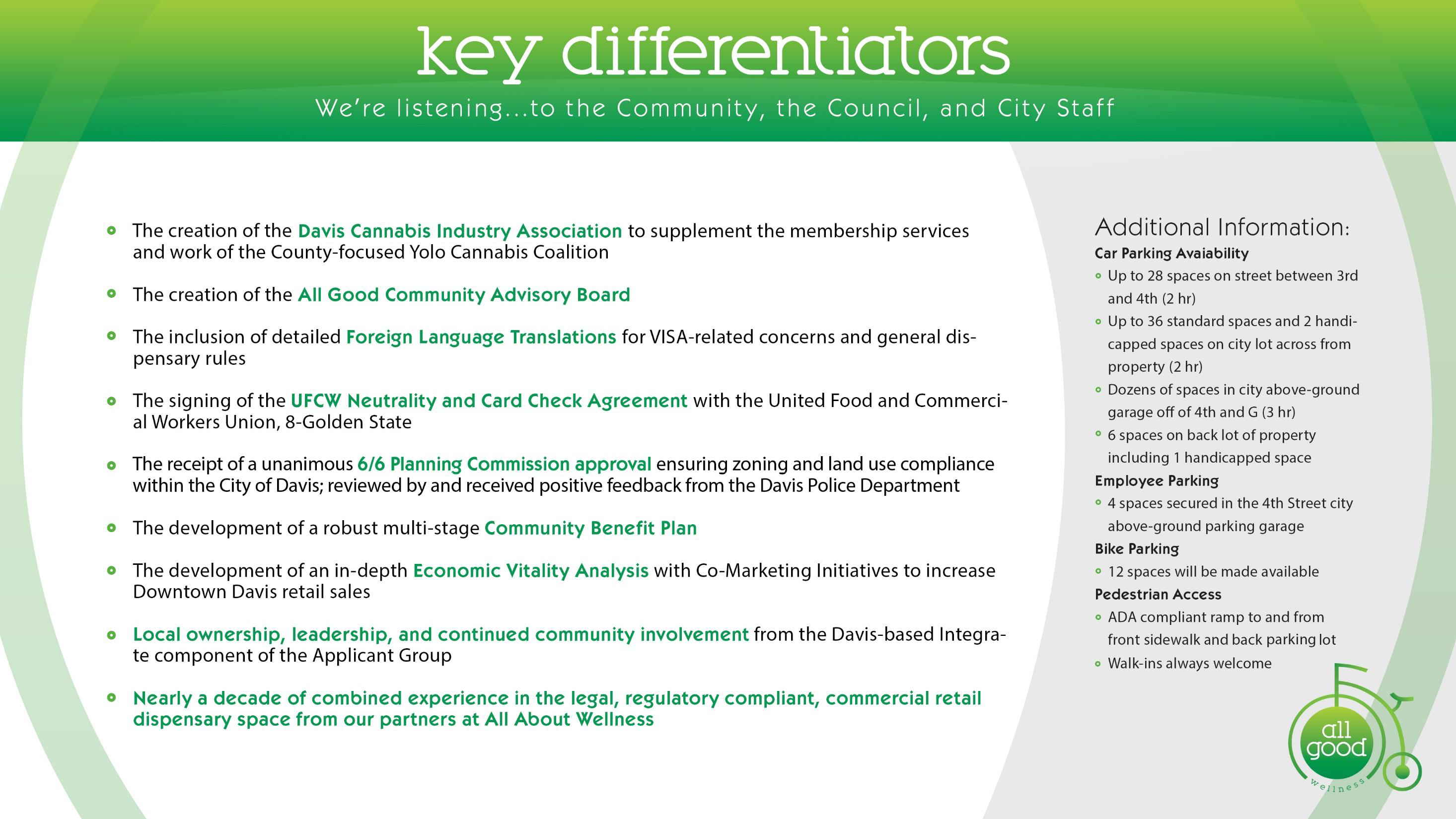 Finally each of the applicants presented the community benefits.  In some cases, these included improvements to sidewalks.  In many cases, they offered benefits to local charities.

Several groups talked about labor agreements.  River City Phoenix used this as a main selling point, but All Good Wellness talked about signing a UFCW (United Food and Commercial Workers) Neutrality and Card Check Agreement.  This is something that the council heavily encouraged.

Mayor Pro Tem Brett Lee was the one councilmember who seemed to want to avoid the core, as he expressed concerns about parking.

“Track record and reputation, I think it’s important but it doesn’t necessarily have to be in the cannabis space,” Brett Lee stated.

He told his colleagues, “I am open to the idea ultimately of more than four applicants.”  He suggested, “Some number more in short order.

“I imagine a phase two happening much sooner than 18 months,” he would add.

Brett Lee had a clear preference away from the core and pushed the two locations on 2nd Street and two on Olive Drive.

But the other members of council were more inclined toward “geographic diversity” and pushed more toward the idea of at least one location in the core.

Will Arnold said, “We have more than four great applications.” He said what he saw was “very serious people who have put together some incredible applications…  We definitely have a very tough

decision to make later on this month.”

He encouraged those applicants who had not done so to reach out to the United Food and Commercial Workers.

“The downtown area is obviously very unique, a very important part of our community,” he said.  “I’m a little bit more optimistic that we can make these work in our downtown.

He cited the Good People Farms slide from above.

Councilmember Arnold cited people who are concerned that dispensaries will add to the problems of homelessness and petty theft.  “The evidence that I’ve seen points to the exact opposite,” he said.  “Around the dispensary, crime is being prevented.”

A lot of this has to do with the security measures and video surveillance that each dispensary is creating.

“Cannabis has been in Davis already, and has been for a long long time,” Lucas Frerichs said, noting that we are in for a major change as evidenced at the ballot box.

Like his colleagues, he was pleased to see so many exceptional applicants, “probably more than four.”

“Significantly tough decisions, but I think we’re up to that challenge,” he said.

He is looking at issues like zoning compatibility, geographic distribution (where he said he was okay with least one being located downtown, but not all of them), ease of parking important (but not absolute), community support, as well as previous experience and track record (not just in the industry).  He also cited labor relation issues as being very important to him.

Finally Mayor Robb Davis said, “I am intrigued how you each really focused on that thing that is your core strength.”

He too listed some considerations.

“All those things are important,” he said.  “It doesn’t make our job any easier.”

He pointed out, “This is the first time anyone in this room has lived in a situation where we went from prohibition to allowance of use of a previously prohibited product.”

He warned, “We need to be careful about helping people see that this thing is going to be okay.”  He said, therefore, that the city’s approach of going slow is partly a product of that environment.

Mayor Davis said, “We have an opportunity to put a stamp on the way we want things to run in our community.” The issue of labor is important.

He said, “We do want to see these geographically dispersed.”

He echoed several of his colleagues by stating, “I’m open about getting one in the downtown.

“I’m not worried about parking,” Mayor Davis would add.  He said that “we are very inconsistent.”

“I’ve lived in the downtown, it is a thriving downtown,” he continued.  “Yes, it has it problems, but I’ll take our downtown over pretty much any other downtown I’ve walked in for the last decade…  The Cannabis industry coming into our downtown is not going to kill it…  We can bring actual retail back into the downtown.”

So he said, “I’m very open to a downtown location.”

The council agreed to consider up to five spaces come May.  That requires them to amend the ordinance, which would take 45 to 60 days according to City Attorney Harriet Steiner.  That means they could approve a fifth dispensary but the conditional use permit would not take effect immediately.

They are now down to nine applicants, and they must eliminate at least four more at the next meeting.