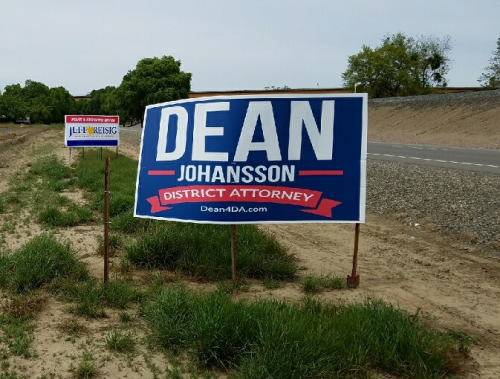 (From Press Release) — Yolo County District Attorney Jeff Reisig and one of his chief deputies have been threatening volunteer campaign workers for Dean Johansson, a Yolo County assistant public defender who is challenging Reisig in the June 5 election, according to Mr. Johansson’s campaign.

Mr. Johansson described these attacks as “bullying” and an “abuse of power.”

Mr. Couzens has sent three emails to Dean Johansson campaign staff alleging a violation of California penal code related to the placement of campaign signs. The second of these emails (sent on April 26) described how Mr. Couzens’ “staff” and “employees” had taken photographs and conducted interviews related to the allegations.

In a subsequent email sent later that same day Mr. Couzens asserted that the investigation was not being conducted on “county time,” apparently confirming that the “employees” he referenced in his earlier email do in fact work for the county.

Additionally, Mr. Reisig personally informed Mr. Johansson on April 18th — following their first and only public debate — that he was referring a complaint about sign placement to the office of

the Attorney General. Mr. Reisig did not state whether or not this complaint was related to Mr. Couzens’ investigation.

In response Mr. Johansson has issued the following statement:

“Unfortunately this kind of bullying and abuse of power is all too common in the current DA’s office and a big part of the reason I am challenging the current administration.

“These accusations are nothing more than a distraction from the important issues being raised by our campaign. The only reason I am acknowledging them publicly is to protect our team from personal retaliation by the DA’s office. Our campaign is made up of hard-working, deeply-committed volunteers who are acting in good faith without exception. I am solely responsible for all actions taken by our campaign.”

Campaign manager Natalie Wormeli also released the following statement addressing the underlying complaint and the involvement of the DA’s office:

“We remain completely open to addressing these issues with the appropriate city or county authorities, however we have conducted our own internal investigation and at this time we believe that we are fully compliant with all relevant ordinances.

“Because these emails came from Mr. Couzens’ personal email account it was not clear to me whether he was reaching out as a deputy district attorney, a member of Jeff Reisig’s campaign staff, or in some other capacity. Mr. Couzens has since stated that he and others are not working on ‘county time’ and I have therefore suggested that he refer his concerns to the appropriate authorities and requested that he not contact us again regarding this matter.”