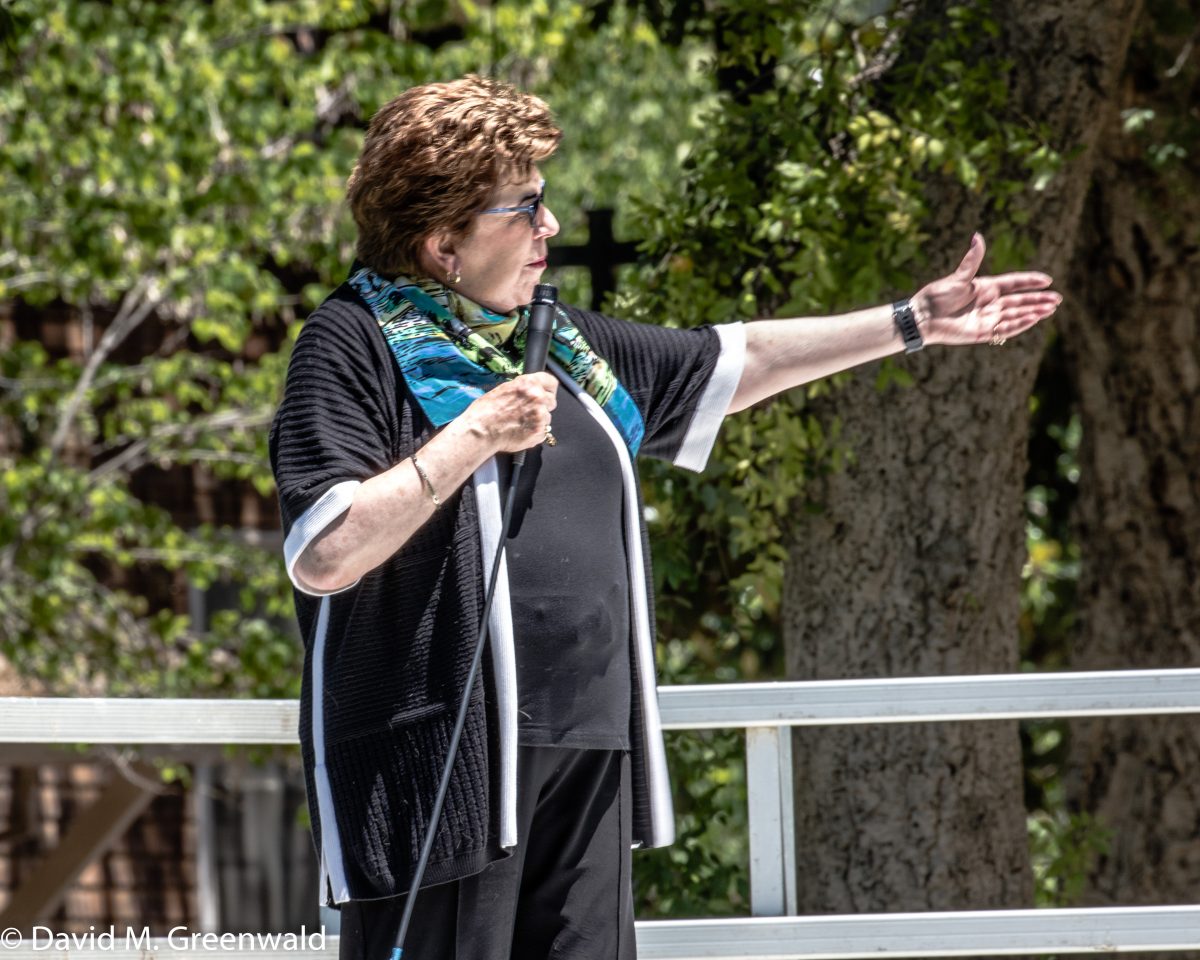 Delaine Eastin, who lives in Davis and was a UC Davis graduate, is running for Governor.  Two decades ago she served as Superintendent of Public Instruction and before that a State Assemblymember.  She told the students, “When I entered UC Davis, the tuition was $82.50 a semester.

“At that time, the state of California was spending 18 percent of its budget on higher education, and just three percent on prisons,” she said.  “Now we’re spending less than 12 percent on higher

ed and more than nine percent on prisons.

“Budgets are statements of values, it’s time to change the conversation,” Ms. Eastin said.  She is calling for making “education tuition free again.”

When she graduated from high school, California was tied for fifth with New York in per pupil spending.  “This afternoon, we have dropped to 41st of the 50 states.  New York spends more than twice as much per student.  That is just wrong.”

She added, “We should not only be investing in K-12 but universal preschool and child development.

“I am the only candidate who has made education, absolutely, her focal point,” Delaine Eastin said.

On housing, she said, “Ten percent of our students across the state are probably homeless or couch surfing.”

California, she said, is 12 percent of the nation’s population, “but it has 25 percent of the homeless.”  She said, “It is time to declare a state of emergency on homelessness.”

She spoke about student housing, “I support an audit of student housing on this campus – why not?  They have nothing to hide, then we ought to do it.

“I believe in something called science,” she said.  “There I said it.”

She said that “we should ban the fricking fracking.”

Ms. Eastin added, “Of course we should be investing in alternative forms of energy.”

Delaine Eastin stated, “It is time that health care is a right, not a privilege.  Every single person in California should have access to health care – it should be affordable and available.”

She quoted Neil Postman in stating, “Children are living messages we send to a time we will never see.  Fact is, what is our message to the future.  I hope it’s the message of hopefulness and yes even optimism about the future.  Because we stood together on behalf of the future by standing for children and their education and their brilliant tomorrows.” 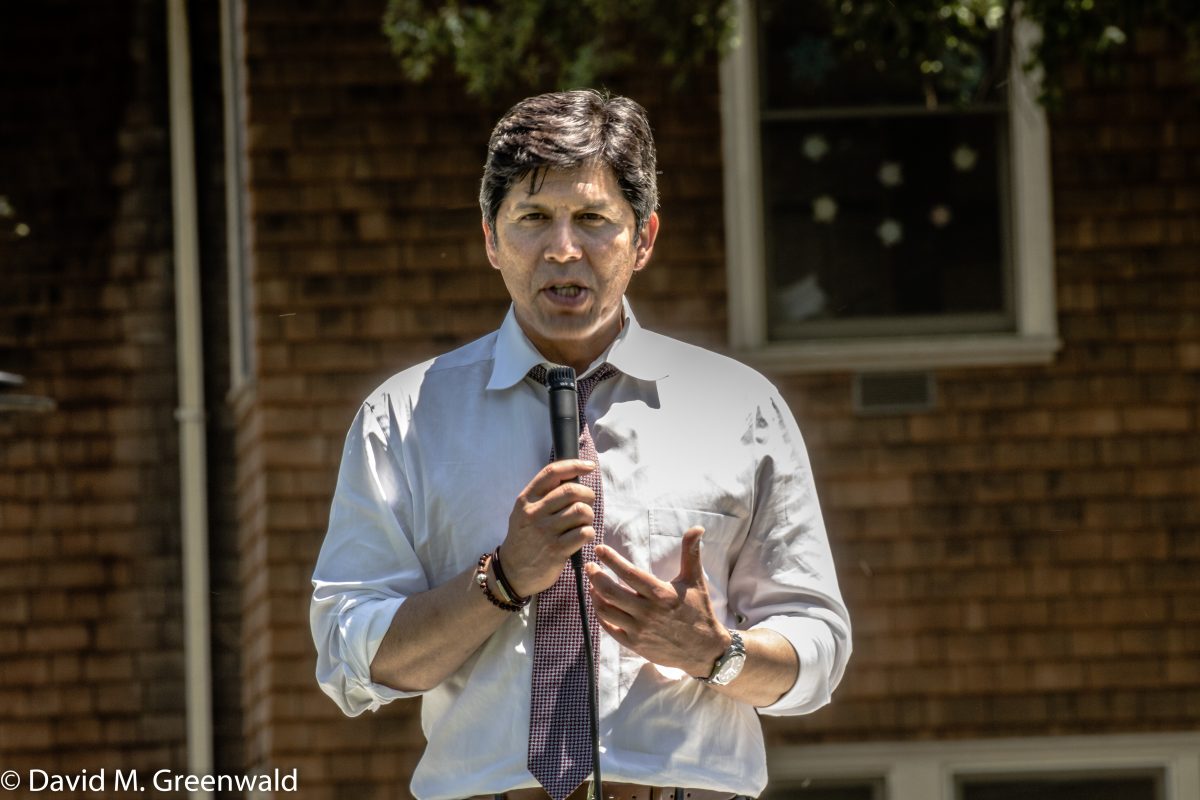 Kevin de León is the former Senate President Pro Tem and is challenging Dianne Feinstein for the U.S. Senate seat she has held since 1992.  He said that California has a state Senate “that believes in the Constitution of the United States.  That believes in the rule of law and wisdom of public opinion as well as the freedom of the press.”

He said he is running for U.S. Senator “because I believe it is time for a change and time to have a different voice, a voice that’s reflective of who we are today… the values, the priorities, and the issues that we all care about.”

Mr. de León stated, “Us Davis Democrats are not going to allow one electoral aberration to reverse generations of progress at the height of our historic diversity.”

He argued that no one in a great state like California should separate “innocent mothers from their children and children from their fathers.”

Mr. de León supported raising the minimum wage to $15, “because no one who works full time should ever have to live in poverty.”

He called “climate change an existential threat to humanity.” 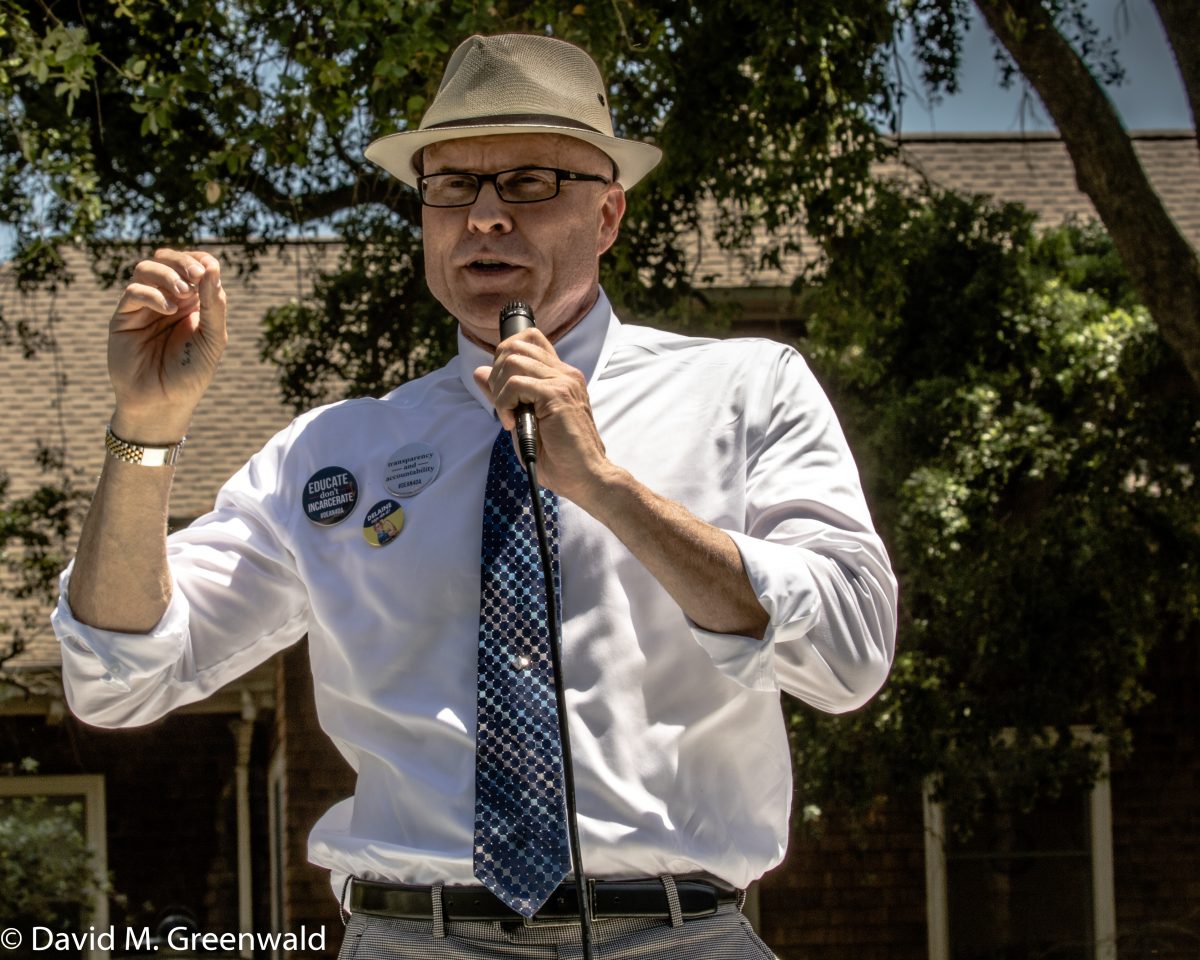 Dean Johansson said “there’s something wrong with the system that has over the last 22 years built 22 prisons and only one campus.”

He said, “There is something wrong with a system that would charge five people of color, just a short distance away from here on Picnic Day, for basically being on the receiving end of police brutality.

“At the end of that school to prison pipeline, stands the district attorney,” he said.  “You have an opportunity on June 5 to make transformative change in the Yolo District Attorney’s office.”

Mr. Johansson said that there is something wrong with a system that took one of your fellow classmates who should be standing here today – Eric Pape.

“The district attorney’s office did nothing to investigate that case,” he said.  “Just a few weeks ago, he took his life.”

Mr. Pape ended up at Sutter Davis hospital over the concern he would commit suicide, and ended up with the strike felony.

Dean Johansson told the crowd that this is mental health month – “64 percent of the people sitting in the jail are suffering from mental illness.”  He continued, “We have a system that is preying upon people.  Not just the poor, with people of color receiving the brunt.

“Here in Yolo County, if you are black you are ten times more likely to be in prison, to be in jail, than a person that’s white.  If you’re brown, you’re twice as likely.  Something has to change,” he said.

He hearkened back to Picnic Day, noting that “by sheer happenstance we got to see a video – and that video doesn’t match police reports.”

Dean Johansson stated, “We have an election on June the 5th, that will bring about fundamental transformative change, here in Yolo and Statewide.  Let’s do it folks.” 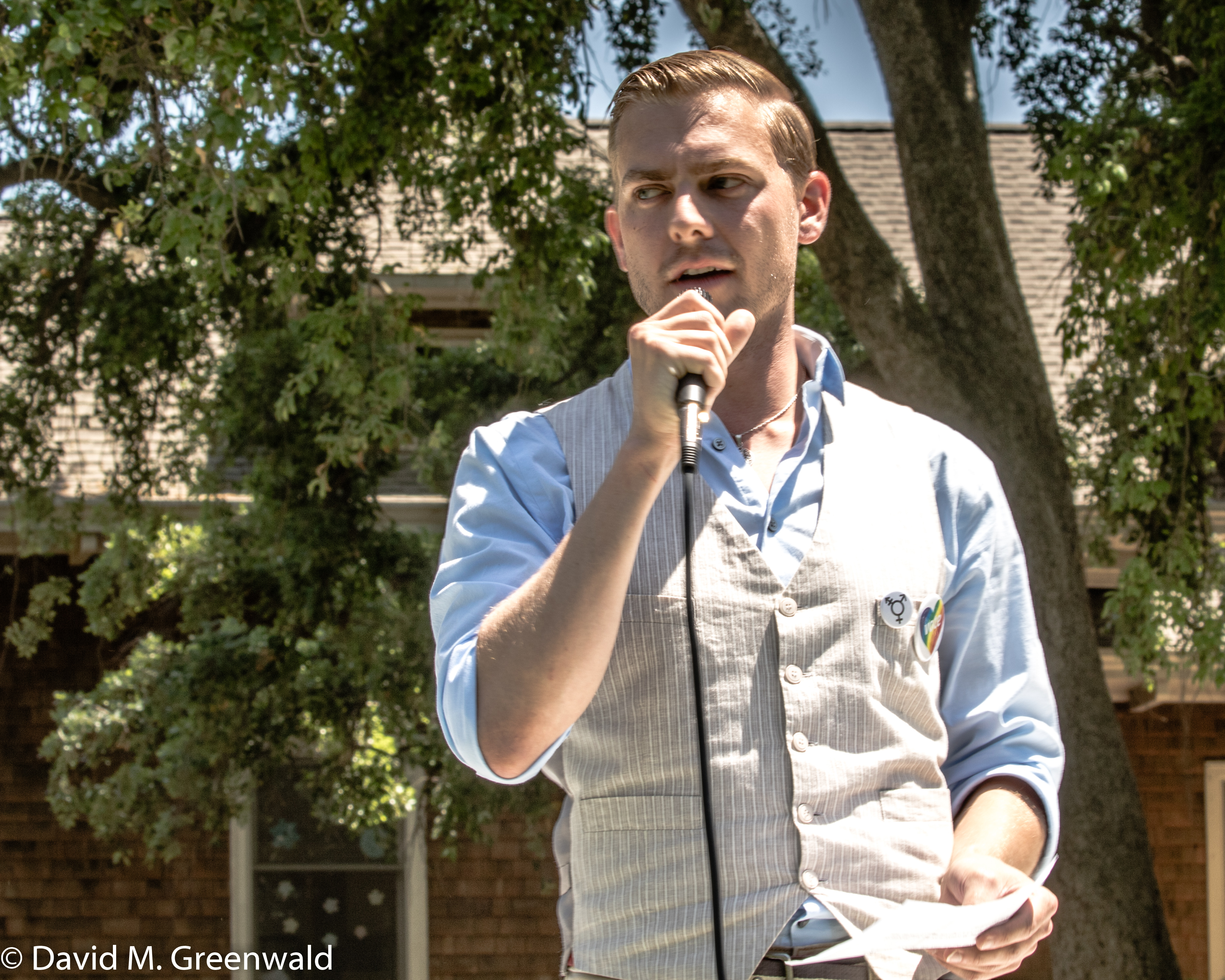 Eric Gudz, running for the Davis City Council, hearkened back to the 1972 Progressive revolution in Davis, telling the crowd, “It was at this very spot in 1972 where the first student to get on our city council, Bob Black, rallied this campus around the new voting age of 18. The Power of Your Vote. Helping to enfranchise thousands, he remains a deep inspiration to me and our campaign for city council to this day. The Power of Your Vote.

“Their votes transformed Davis, built bike lanes, the farmer’s market, and told the rest of the town that students matter. The Power of Your Vote,” he said.

Mr. Gudz continued: “Back here in Davis, the folks that continue to grip our community in this rental crisis, that continue raising the rents, that charged me a $4000 security deposit, they vote every time. The Power of Your Vote.  My question to you all: Does the power of the vote belong just to them? Or is it high time we all do what we must to protect renters and students?”

He said there was a time when the community didn’t discount the campus voting block, but less than 25 percent of student vote locally.  He said, “I know we can do better.   With your one vote, you can change Davis, and change the world.”

Mr. Gudz closed stating that “you can vote to put a renter and recently graduated student on our city council who understands what it’s like to live with less than 100 bucks in their pocket, who wants nothing but to ensure that each and every one of us have the ability to survive and thrive in Davis.”