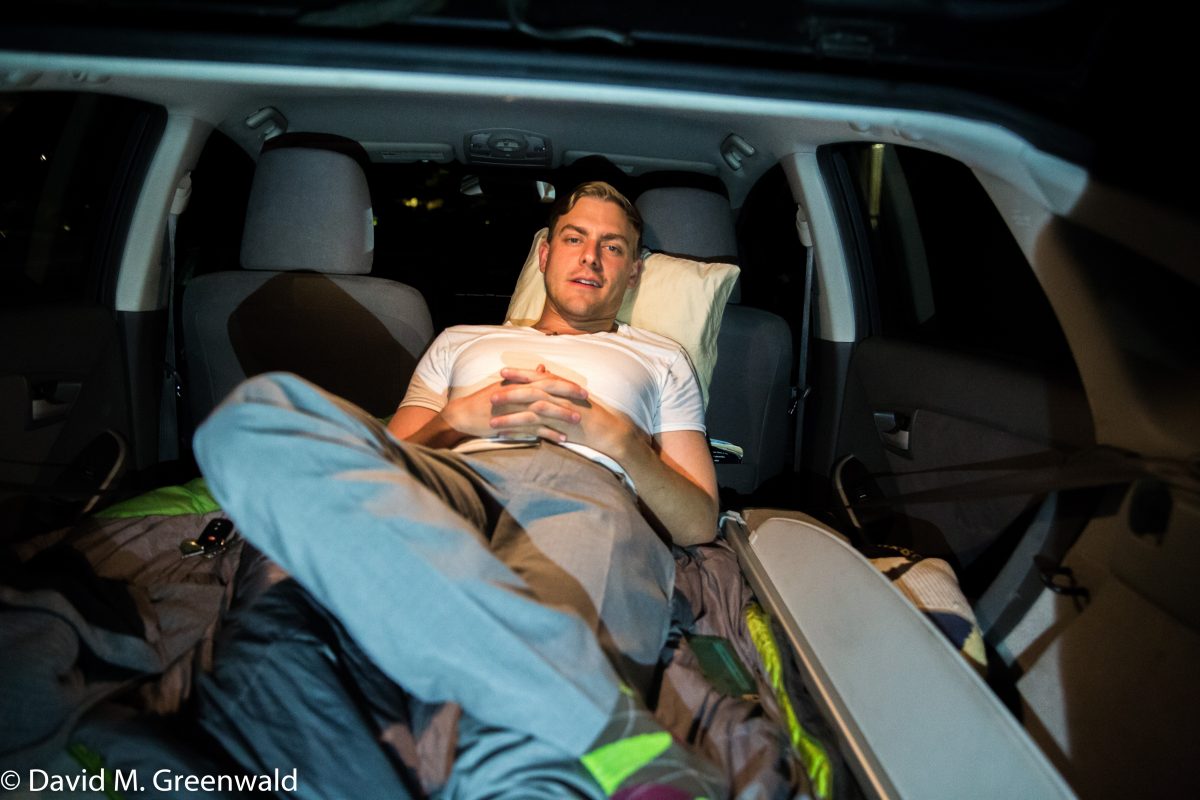 This week, Eric Gudz, a candidate for Davis City Council, has been sleeping in the sleeping bag in the back of his car.  His goal is to raise awareness for students forced to live this way out of necessity.

The Vanguard caught up with him around 10 pm on Thursday in a dark Davis neighborhood.

“The last couple of months, I was thinking about the state of our rental crisis.  I was thinking a lot about our homelessness crisis that we have in Davis,” he explained.  “I realized that there

was a whole lot about the situation that I really didn’t understand fully because of that experience that I do not have.

“I decided it was time for me to take a step in those shoes and really see what those realities are like for folks that aren’t as privileged as us to be able to have a nice warm place to sleep and a roof over their head,” he said.

He said a lot of students sleep in their cars downtown.  A recent survey by UC Davis found that around three percent of students who responded to a survey in Spring 2017 experienced some degree of home insecurity at a given point in time.  The survey does not speak to the severity of that insecurity.

While that may not seem like a huge number on the surface, and is a good degree lower than surveys in Los Angeles, it could mean that at any one point in time, as many as 1200 students are experiencing housing insecurity at UC Davis.

Eric Gudz said that the first thing he noticed when he undertook this exercise was “just the sheer amount of energy that this takes.”

He explained that when you decide to sleep in your car on the streets there are a number of things you immediately start thinking about.  “You immediately think about your location and you’re automatically thinking a lot more about your safety,” he said.  “Is this a safe place for me to sleep?”

He said, “Is this a place where I’m going to get five, six, seven, or eight hours of uninterrupted sleep?”

Factors that he was looking at was the lighting.  Too much light, like the first night he tried this, could mean trouble sleeping or staying asleep.

Another factor was traffic.  The more activity happening, the harder it will be to sleep but also the more likely it is to put him in contact with other people.

“You have to think about a lot of these things,” he said.  That alone, he said, “Adds a lot of extra stress.  A lot of extra anxiety to one’s life.  When you don’t have to consider a lot of those

“That was definitely a big thing that I picked up right away,” he said.

Another factor is the issue of restrooms.  “Bathrooms are a big thing,” he said.  “Obviously we have a couple of spots in the downtown where one can utilize the facilities.  But there’s not a whole lot of folks that are going to sleep downtown because you have so much other stuff happening downtown.”

He said with all the things happening, if you have a car, “you’re probably more likely to sleep in a quieter low key neighborhood that’s not going to be that close to the restrooms.  So you have to negotiate that tradeoff.

“It took a little bit of time to get used to that the first two nights,” he said.

Eric Gudz said that he has been able to get full nights of sleep.

“It depends on where I’m at,” he said.  “The first night was really hard just because it wasn’t something I was used to as much.  There were a lot of really big lights the first night, so I’d sleep maybe two or three hours and kind of wake up and roll over.  That first night was a little rough.  The second night I learned from that and stayed away from the lights.”

He said, “It’s not that easy to find a spot that doesn’t have traffic that goes through, doesn’t have lighting that you worry about.”

Another factor he said was Neighborhood Watches and the possibility that he might have someone call the police on him and have to deal with that while he tries to sleep.

“I could potentially be someone who has the police called on him,” he said.

This was his fourth night and he was anticipating sticking it out one more night, but he said he was getting worn down by the experience.

“The big message to the community is that in order for us to ultimately be able to address the underlying causes of these issues that we face,” he said, “we need to understand them from the ground and from the perspective of a lived experience.”

Share:
Tags:Eric GudzHousing InsecurityRental HousingStudent HousingUC Davis
Previous : Board Hears Presentation on the Feasibility of a Facilities Bond in November
Next : City to Hire a Finance Director, Other Changes