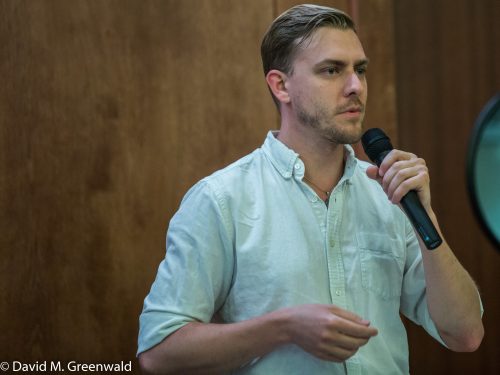 (Editor’s note: In this special series exclusive to the Vanguard, Davis City Council candidate Eric Gudz discusses his military experience, challenges for the city, and plans for the future. This is part one of two.)

November 2nd, 2010. One day after the largest battle during our entire deployment, all of us in Senjaray met the dawn with heavy hearts, furrowed brows, and endless questions. Most of us had survived, but the village was reeling. As I was slowly walking the streets of the central bazaar, struggling to count the number of market stalls blown away by RPGs, I tried to imagine what this new reality for the community looked like, to no avail. We had no time for speculation; a Great Shura was convened at once. In Senjaray, the convening of a shura was not a trivial affair; a representative from every single neighborhood and echelon of the town was summoned to attend. Its purpose: to identify the harsh realities of the town and determine the collectively-shared path forward.

The tension emanating from that gathering was nearly unbearable. The trauma of war did not discriminate based on age nor class, and every one of us in that room were in the same fight: to save the town of Senjaray. Tensions continued to rise, and I could feel the emotions and pain with each discussion. Blame was shifting from one neighborhood to the next, from one leader to another, sewing grief and negativity among those gathered. About halfway through the discussions, one of the village elders leaned over to me and quietly remarked in Pashto. My interpreter quickly translated: “We talk as though we have a harvest already, but we do not see the garden that must be tended to first.”

I sat with this proverb for a few seconds in silence before mustering the courage to ask of this elder: “Please, say this to the entire Shura.” Although we could not understand each other’s words, we connected through a moment of anxiety over this harsh truth with our eyes. Despite our shared anxiety, he knew it needed to be said, and I was encouraged once I saw him steel himself and prepare to speak. He hushed the whole room abruptly and the words were spoken. Several silent moments followed. With those words, the whole conversation shifted. Fresh from the conclusion of their own

harvests in the Arghandab River Valley, the elder’s plea for us to get real struck a deep chord with the room, and we got to work.

From that moment on, we spent the rest of the Shura discussing the realities of where Senjaray was at that moment, without reservation or shrouds, and what needed to be done at present to “tend to our gardens.” We spoke of the school revitalization, the local workforce, the waterways, the road repairs, and the flow of commerce within the bazaar. Amid the excitement I was frantically recording our thoughts and ideas down in my battle log, being sure to capture as much detail as possible. I could feel the tension lifting in the room as each leader, one by one, began to accept the realities around them and start to work from a grounding that was centered in the present (and not from a past era).

After a few more hours, I diligently collected my notes as the proceedings were concluding. My interpreter was helping me sort all the pages and drawings, and a few of the attendees were pleasantly amused by the quantity of scrawlings. As we were about to leave, my company commander turned to me and said: “Eric, you’re going to make this happen”. All eyes were then on me, waiting for my response. I took a deep breath and replied, “Whatever it takes Sir – whatever it takes.”

As a result of that meeting, my task was to come up with the underpinnings that would support one of the first general development plans for the town of Senjaray. Our previously conceived civic engagement strategy would not suffice; we needed to think bigger. The Taliban historically receded during the dormant winter months back to Pakistan, so we had less than 6 months to draft the plans, line up the contracts, and break ground on the largest public works operation the town had seen in decades. My team and I had to hit the ground running, but luckily for Senjaray, that was our specialty.

Given’s Senjaray’s strategic location as a key nexus point between the Arghandab River, the main national highway system, and the major gateway of the agrarian South, the town’s success hinged on preserving the steady flow of resources, information, and people to and from the surrounding region. The Taliban were keen on this as well, and they devised their own strategy for how to disrupt these three major lines of effort. Whether it was restricting infrastructure improvements, inhibiting the school from succeeding, or diminishing the participatory nature of the local government, the Taliban were intent on stopping us from rebuilding. It would prove to be a formidable challenge.

With all this in mind, I took the lead on drafting the plans. Days turned into weeks, and after about a month we were ready to present our thoughts to the village elders. With the Shura re-convened, we laid out the plan. Our first step was to identify the specific projects and sites within the scope of these three lines of effort and create a system that prioritized what got tackled first. Step two was synchronizing all the bids and contracts so that each completed project sped up the completion for the next. The last step was to launch the entire operation through a new participatory framework that gave as many community members as possible an active role in the revival of their own town. With their thunderous applause of approval, the Senjaray Workforce Initiative was born.

An initiative of this size was going to require the whole town to pitch in, so we began creating jobs by the hundreds, all locally within this participatory framework. We divided the town into 5 project areas based on the 5 neighborhood districts in the town, and a local neighborhood leader was elected among their peers. Each district had an anchoring project and several supporting projects, all of which were fueled by this new workforce, flexing in size depending on the needs of each district on that particular day. The five core projects identified were the primary school (south district), the bazaar (central district), the highway (north district), the irrigation and crop distribution nodes (east district), and the local governance hall (west district). Each of these civic institutions needed to be up and running under the full control of the local government and supported by the majority of the community members by the early summer return of the Taliban. Piece of cake.

The school was a top target for the Taliban (who wanted to control the flow of information through their own institutions and pick their pupils) and its success was integral to the future of the town, so we kept that the highest priority. Not only did we make the school a centralized location for civic engagement, but it was also the epicenter of our regional partnership with the provincial government due to the commitment we made to open the first all-gender institution in the region.

The roadways were next, since a local transportation grid can make or break a city, so we optimized the pavements within the network to handle new flows from the school as well as establish better connectivity to the centers of commerce and agricultural distribution nodes. After shoring up the irrigation canals and revamping the distribution nodes for the town’s two main crops (Pomegranates and Hemp), we were almost ready for the spring.

The bazaar project proved more challenging, as the big attack had chilled local commerce and sent many business owners packing for Kandahar City (just over the causeway to the East, sounds familiar). The key to this downtown solution was creating stronger farm-to-fork bonds through the growth of the budding farmers market, piloting free apprenticeship programs through the local government, and incubating individuals within the workforce program that wanted to help start new cooperatives within the market.

The local governance hall proved to be the trickiest since it was located on private property (the spoils of the local warlord from the days of the Mujahedeen, a story for another time), attached to the police and military substation, and away from the epicenter of activity in town. Separating the local police forces from the regional military was first on the list. The local military unit moved in with us at our company outpost, and we convinced the local warlord to sponsor the creation of public civic spaces on his property to host the continued evolution of the workforce initiative. As the first rays of the summer sun began to shine on Senjaray, the returning Taliban, who assumed they had broken the will of the town, returned to find a town empowered and united to greet them head on. Oh, what a sight that was. We had rebuilt a city, and it was better and stronger than ever before.

Eight years later, the rebuilding of Senjaray stays with me. I led the efforts to rebuild a town near the brink of defeat and it taught me how to be comfortable with the hard truths, how to bring diverse groups of stakeholders together in shared struggle, how to brave tremendous odds, and how to turn a vision of progress and innovation into a mission that produces the greatest results possible. I’ve seen the process work. I know how to do it. I’ve actually rebuilt a city and I understand the complexities of the task at hand.

That journey informs every step I take as I bring my experience and vision to our beloved town of Davis.

Continued to Part 2: The Communal Harvest, next week.

2 thoughts on “To Heal a Village, Part 1: Tend to Our Gardens”