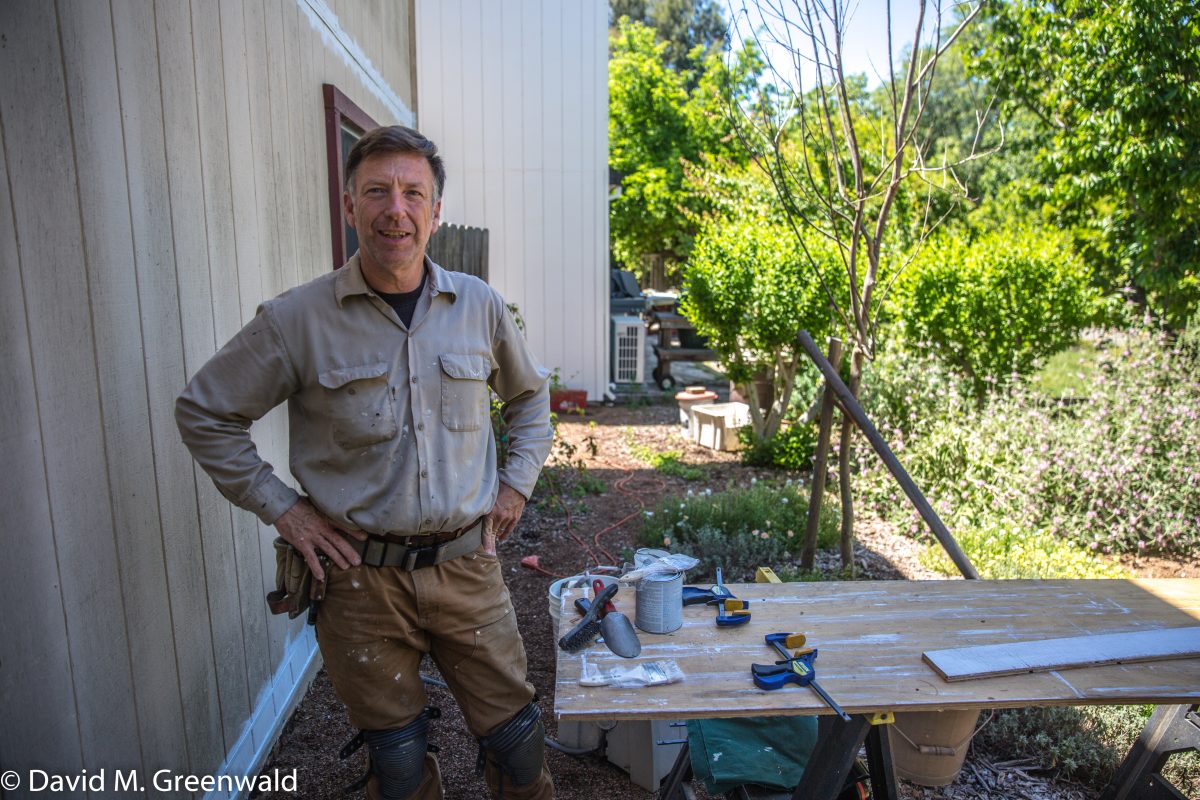 The Vanguard caught up with city council candidate Larry Guenther on a job site Monday in Village Homes.  He explained that he had come to Davis as a graduate student in the geology department, “funding ran out, so I started  doing handyman work.  The schedule was flexible and I knew how to do stuff and solve problems.”

Upon graduating with his degree, “I realized I liked the flexibility, I liked the problem solving, I like the interaction with people.”

He said, “I really liked the discrete beginning and ending of a project, which in academia doesn’t happen… ever.

“It just suited my character better,” he said.  He got his contractor’s license.   “I graduated.  When you graduate you think, well what now?  I was okay with what I was doing.  I decided to keep doing it.”

Drawing the issue back to Davis, he noted, “People say that Davis has a pretty intense permit system and inspection system.  This is the only place I’ve had any experience, so for me it’s normal.

I don’t think it’s as egregious as people describe it.  It’s code.  It’s there.  You can look it up and they’ll tell you if you can’t look it up.  Then you do it.  And they sign it off.  It’s pretty straightforward.”

Larry Guenther explained, “What I learned is communication is absolutely key.  Collaboration is essential.  You’re going to hit obstacles and you have to figure out how to get around or solve those problems as you meet them.  If you don’t know how to do it, chances are someone else does and you need to find that person and talk to them or find the information somewhere.

“Working in a collaborative setting and solving problems is kind of what I do,” he said.  “I kind of feel like that’s a direction that I felt the city needed to go.  Those are just skills I thought – those would be useful in city governance, talking to people, listening to people, hearing what they really want.  You have a budget.  It’s obviously not driving nails or laying flooring or something, but there are a lot of similarities.”

He explained that his job itself is changing a lot.

“When I started doing this I was a handyman, so I was just doing a little stuff,” he said.  “On a good day someone would give me a whole list of things that they would need done at their house and I could work a whole day at the house or maybe a few days.  But as often as not, it was like three to five jobs a day at different places.  Keeping track of that and trying to schedule that was a huge education.

Larry Guenther said he doesn’t contract out labor.  “It’s actually difficult to find day laborers.  I do almost everything myself, because I have a great tile guy – his work is outstanding, he’s fast, and given the quality of his work, he’s cheap.  Those are the three things you are not supposed to be able to get at the same time.”

He explained, “There’s no point in me doing tile.  I’ve done tile and I can do a good job, but it’s slower, he’s a tile guy, he’s been doing it a long time and he’s fast.”

He said one of the great things about his job is“it’s actually really variable.”  So he doesn’t necessarily have the same hours each day.  “That also suits my character pretty well.”

Larry Guenther explained that he will do emailing and researching materials and writing bids in the morning.  Get to the job at nine.  Leave the job between four and five and then go work on more bids and emails. 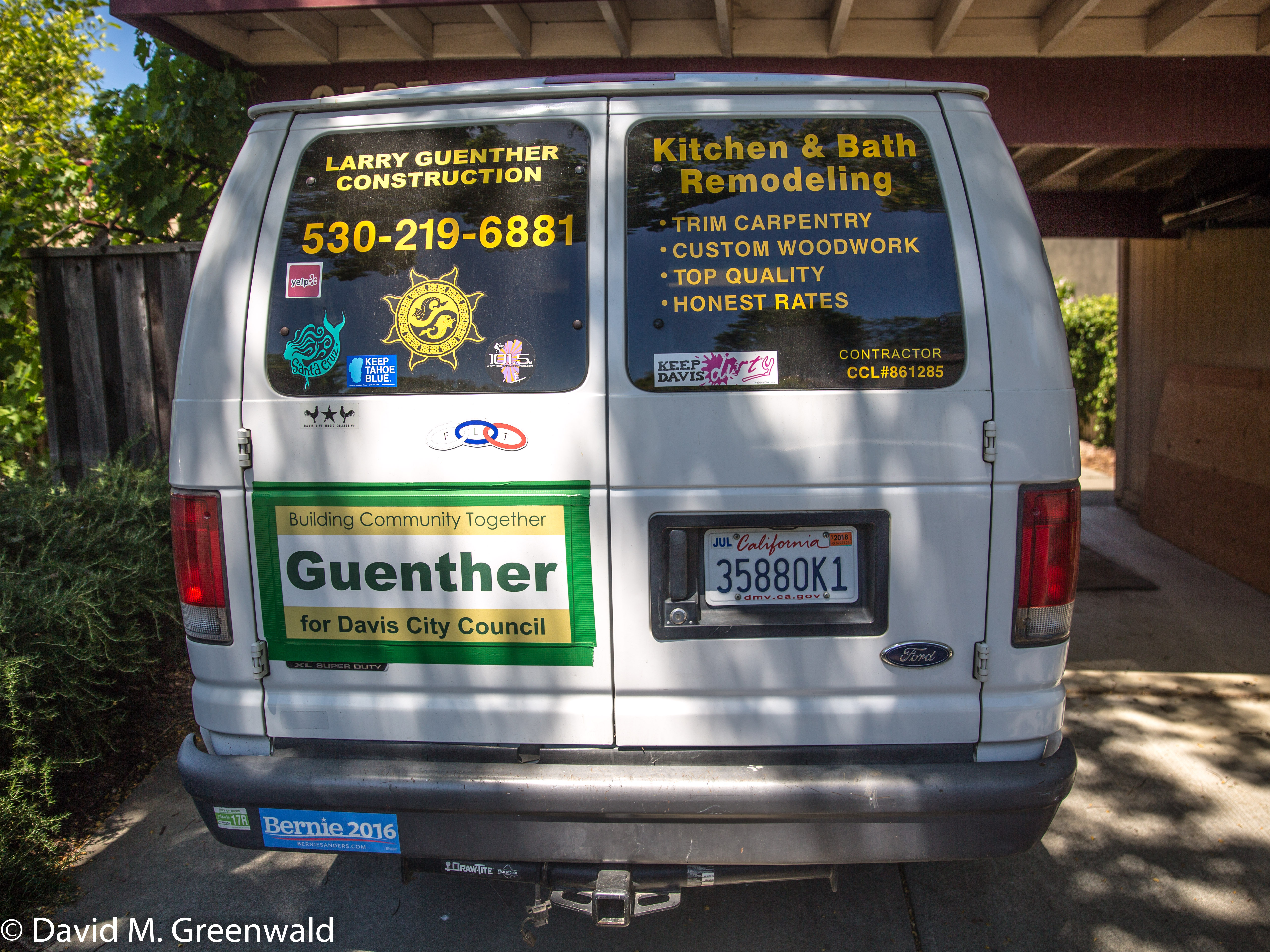 “I’m used to it,” he said in terms of the workload at the end of the day.  “There are days when it’s just rough and you kind of can’t wait for it to be done.”

He explained, “If something needs to get done, you can run.  But you can’t run all day, every single day.  Because you’ll kill yourself.  And you start making mistakes and when you’re dealing with power tools that can take your hand off, mistakes are bad.

“You learn to pace yourself, you learn what a safe pace is and when you’re getting tired, when you miss with a nail gun, you think maybe it’s time I do some painting because I don’t want to put the

next nail through my leg or something.”

He said, “Usually there is something else to do, you don’t have to just stop.”

Larry Guenther is running for the city council now but thinks that the job will work fine with his day job.

“My job is not as flexible as people think,” he said.  “People say, well you’re your own boss.  That’s one way to think about it.  Or you can say, you have 100 bosses.  And they don’t know each other.”

He did say, as he does bigger jobs, “I really try to keep it to one job at a time.”

He said, “I can cut back on the number of jobs that I do in a year.”  Among the current council, two are business owners and three have full-time jobs.  “Obviously it can be done.”

He said when he first decided to run, someone told him to take six months off.  He said, “Turns out he was right, but I don’t know if I could have taken six off.  Just financially.  There are bills to pay…  But having three months before off would have been a lot better.  People who aren’t working right now have a big advantage.”

Larry Guenther concluded by noting that working with the city and the bureaucracy is not as bad as people make it out.  “The biggest hurdle that people have is just accepting that it’s there.  Just do it, it’s not that hard.”

Share:
Tags:City CouncilElection 2018Larry Guenther
Previous : Investigating Officer Testifies against Rizo in Murder Trial
Next : Analysis: If Dan Carson Is Leading the Pack, Who Is the Second Place Winner?