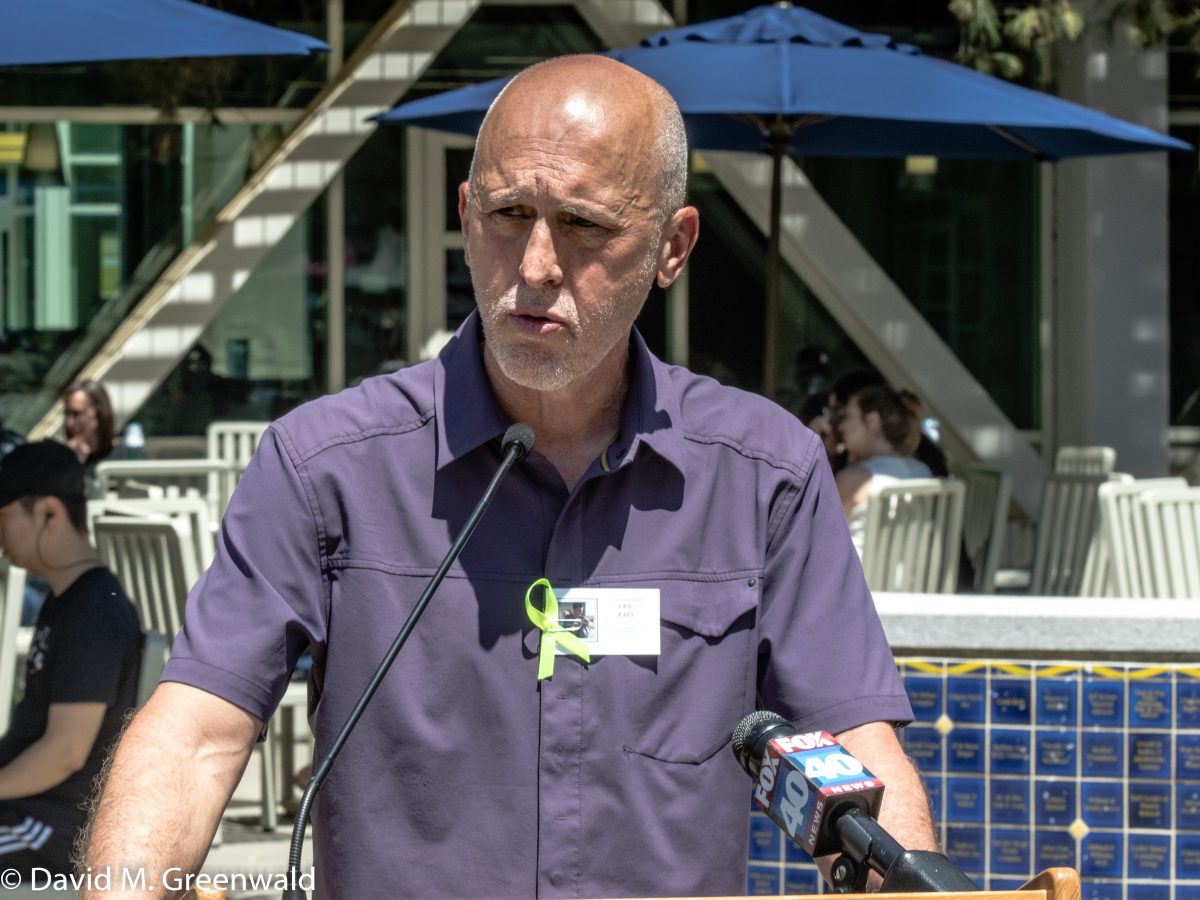 Eric’s mom wrote to me just this morning and asked if I would come over and talk about restorative justice.  My son was 5150’d at Sutter four years ago.  As a parent I don’t know how she’s holding up to be with us.  But I appreciate it and I hope we will listen to you.

We have an opportunity every now and then to look at our systems and see just how broken they’ve become.  We see two systems here which, unfortunately because of people of my generation, the choices we’ve made, are broken.

I’m part of it.  I choose other budgetary priorities even as my own son and daughter struggle with mental health challenges.  We need to change that.  Budgets are moral documents.

I think that’s what you’re talking about – the systems change that we need.

Our criminal justice system, let’s be clear, there’s a Scarlet Letter in our age and it is ‘F’ for felony.  You get that behind your name, your life is over.  You can’t find housing.  Almost impossible to find a job.  Most places you can’t vote.  You are a marked person forever.

Go out to the edges of community where people are living rough – many of them have an “F” behind their name.  We don’t want them.  It is a mark forever.

How a case like this gets charged felony – that’s a broken system.

How do we do that?  Leave aside the fact as Tracie (Olson) said, there’s a fundamental question about how we deal with mental health.

How do we put an F so easily behind so many people’s names?

The question is and the question of restorative justice is what is the harm and who is it against?  We have decided that the harms of our society are perpetrated against a disembodied state.  That’s what the criminal justice system is.  It is not someone who has been harmed sitting there at the table, talking about the harms that have been done and discussing how they can be made right.

When the state in the form of a district attorney overcharges a case that should have been diverted, and makes a claim that the state is harmed by someone with a mental health problem – that lays bare the brokenness of that system.

If we’re to make any progress in our criminal justice system, we’ve got to move away from harms against the disembodied and make them about community.  And then we can find a way to healing, we can find a way to making the harms right, in a way that will honor all relationships – victims and offenders.

But Tracie is right, even within a restorative process, fundamentally – which is a diversion program – if we don’t ask the question of what led the person down the path that brought them to the harms, if we’re not willing and able to ask that question then our system is not working for us.

We also need to leave asking the question of how we change our criminal justice system so that we’re no longer talking about the disembodied state as the one who is harmed, but we focus our harms and our remedies for those harms in and within human relationships.  We’ve made a start, but we have a long way to go.

I really appreciate you all coming.  The memory of Eric needs to stay with us, not as a sad story but as a story that has brought us together to take action against the brokenness of our systems.

Share:
Tags:Criminal Justice SystemMental IllnessRobb DavisSuicide
Previous : Gun Permits, Lost Dogs and the Coroner: The Sheriffs Race Is Important for Davis Too
Next : Will the District Add a Pool to Davis High School?