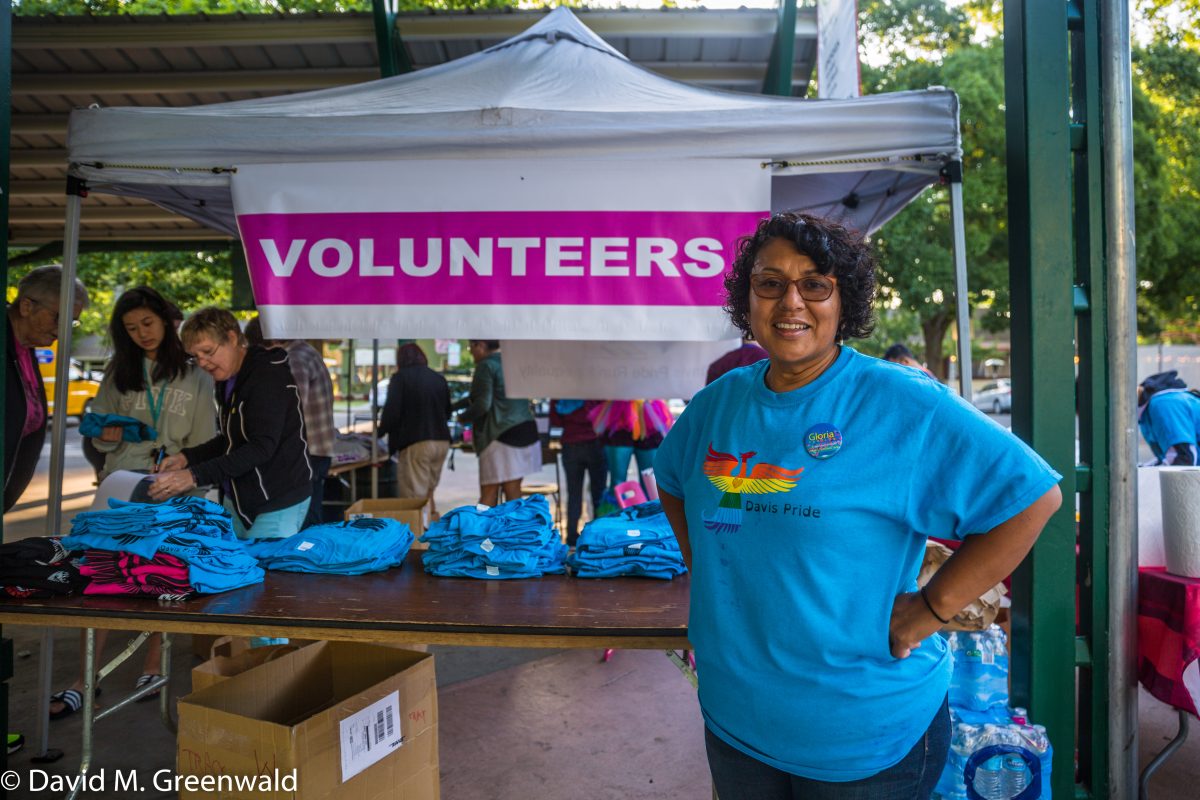 Sunday was the 4th annual Pride Festival in Davis, sponsored by the Davis Phoenix Coalition.  The Phoenix Coalition was founded following the 2013 anti-gay attack against Gloria Partida’s son, Mikey.

“We started (Pride Day) after my son’s hate crime incident,” Gloria Partida explained to the Vanguard.  “We incorporated a run rather than a parade for pride, because my son was a long-distance runner.  After the attack he wasn’t able to walk and we weren’t sure if he was going to be able to run again.”

She said, “When he was able to run again, we felt it was a very appropriate thing to start our pride festival with.”

They also saw it as a testament to the resilience in people.  This year’s Pride Festival was dedicated to a young person who ran in the race a few years ago.  Last year, the family came out and ran the race in their honor because they committed suicide.

“Pride Festivals are really important to the community, particularly for young people, to show them there is diversity in communities and there is support for them,” Ms. Partida explained.

Part of the Pride Festival was the painting of the rainbow crosswalks.  The crosswalks around Central Park were painted to show visibility in the community so that people know that this community

is present in the broader community.

“The good thing about starting the festival with a run is that is that it’s kind of a really natural way for people to participate and interact in the space that everyone can participate in,” she said.  “Everyone can run together whether you’re an ally or a member of the LGBT community.  It’s a great neutralizer.”

Last year’s run drew 260 people.  This year, when they closed online registration, we were at almost 260 and more people signed the day of.  Gloria Partida estimates about 300 people participated in the run part of the festival.

Overall, a little over 2000 people participated.  “We definitely had a much bigger crowd this year than we had last year, and last year we thought we had 2000,” she said.

She attributes the size of the event to the entertainers and the music portion of the program.  “I really believe that art and music is also a great neutralizer,” she said.  “It’s a safe space for people to make connections across and so if you have a lot of music that everyone can enjoy regardless of which community you belong to, that I believe is a great place to meet people.”

Gloria Partida explained that last year a neighbor wanted to come to the Pride Festival as a way to support the community.

She added, “It’s not this ‘out there’ community.”

Gloria Partida sees this as intricately connected with her broader body of work.  “It is building bridges across communities and building platforms for people to make connections,” she said.

“It’s really important that everyone is connected to each other,” she added.  The Phoenix Coalition, she said, is looking for ways to make various community visible to the broader community.  “We are looking at ways to integrate everyone into the community that has more power and agency.”

She explained that she sees her run for the city council as a continuation of the work she has already done in the community.

“Since I got to Davis, I have done work in finding resources to make our community stronger,” she said.  “It’s really important for the city council to be able to support everyone in the community.  And be able to build those relationships with the university, with the region and with the county and with Sacramento because we’re not a silo, we’re not this little island place.”

She said not only is being connected important, but it is vital that we know how to make those connections and find those resources.

Recently they started an LGBT Youth Group for kids in the seventh through 12th grades.  They were able to connect with Parks and Rec as well as UC Davis and the LGBT Center on campus.  They did a lot of outreach to a lot of different places.

“It’s important to make sure that there is outreach across all the different resources,” she said.  “I think it’s really important for everyone to be invested.”

Too often, she said, the community is directed by those with power and agency.  She said, “I think that leaves a lot of people out.

“I’d love to bring other people into those conversations,” she said.