One fiscal impact not included in previous analyses is the additional sales tax revenues from construction. The proposed Nishi project is subject to sales and use taxes upon construction and operation, and the tax would be payable within the County per Board of Equalization Regulation 1826(b). Sales tax revenues for the City are largely dependent on the final purchase price and designated “point of sale” for the proposed project. This is a one-time revenue source that can be used to offset costs to the City.

I previously estimated potential sales tax revenue increases for solar photovoltaic projects in San Luis Obispo and Inyo Counties. These are often overlooked because the estimates require unraveling arcane rules and formulas at the Board of Equalization and State Controllers Office. That appears to be the case in the initial fiscal impact analysis on the Nishi Project.

The current overall sales tax rate in Davis is 8.25 percent. That rate is applied to the purchases of construction materials. If the project site is designated as the “point of sale,” the most common choice for such projects, that sales tax revenue accrued to the City.

conservatively, as part of the local share. The City thus receives 2.25 percentage points of the 7.75 percentage point sales tax revenue from the proposed project.  A second component equal to 1.06 percentage points is deposited into the Local Revenue Fund 2011 in the State Treasury; this is then reallocated back to the localities based on formulas specified in Assembly Bill 118 (2011).  The amount that the City receives is independent of the sales and use tax revenues generated in the County.

The estimated cost for construction materials at Nishi is about $111 million, based on FannieMae’s “Multifamily Market Commentary – March 2017,” and assuming that the project is about 700,000 square feet. Applying the sales tax rate to this amount, the project should generate $3.34 million in sales tax revenue for the City. The attached table details the calculation. 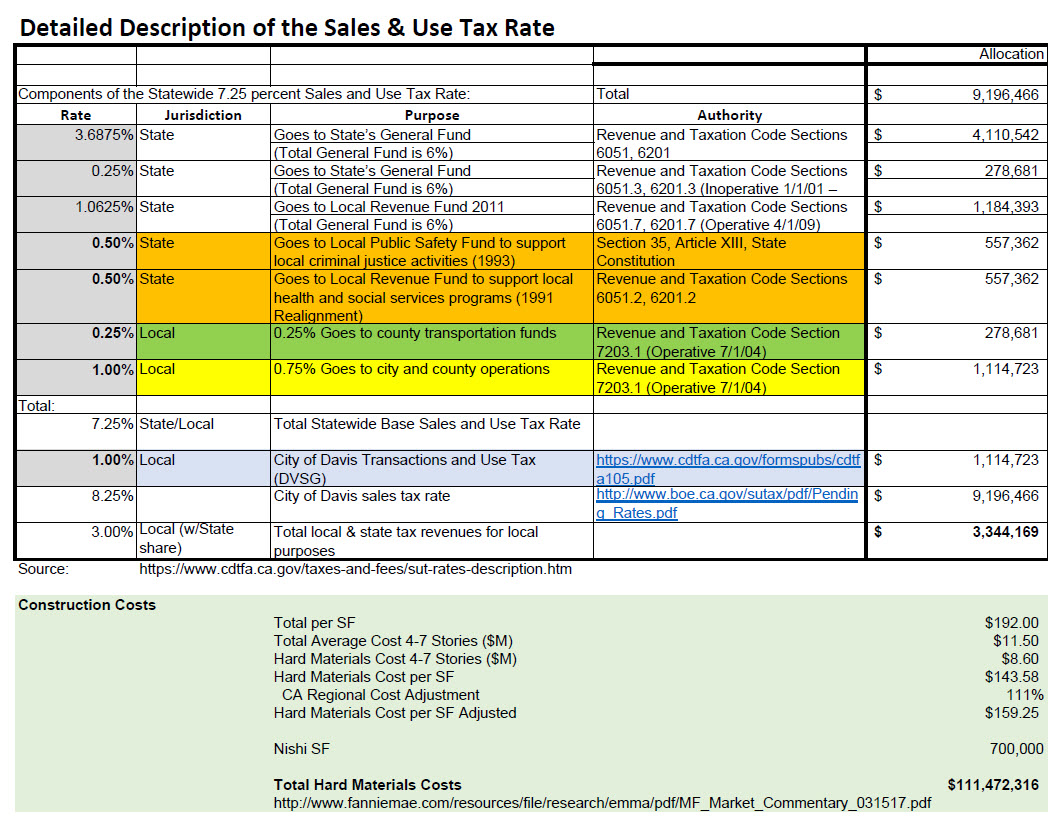 Share:
Tags:Election 2018Measure JNishiSales Tax
Previous : Nonpartisan Advice on How to Decide Your Vote in the 2018 Davis City Council Election
Next : Video on Fullerton’s Arrest Goes Viral for Johansson Campaign