It started late on Tuesday as Colin Walsh, who is wearing a number of overlapping hats this election cycle, on Facebook posted a screen shot of a Yes on J sponsored article.  The sponsored article was from the Vanguard – the press release of ASUCD endorsing a Yes on Nishi position.

One of the listed contacts on that press release was ASUCD Senator Alisha Hacker.  But Mr. Walsh wrote: “Does anyone else think it is interesting that the student featured in the yes on J ad is involved in an ASUCD election scandal?  Including a possible recall of the ASUCD president?”

The link goes to an Aggie article where there is an allegation of voter fraud, accusing “President Michael Gofman, Vice President Shaniah Branson and Unite members of violating ASUCD Bylaws 406(a)(c) and 406(A)(a)(i).”  Ms. Hacker is only mentioned once and only because she happened to be on the “Unite slate.”  The Vanguard was informed that while anyone can be recalled for any reason, an investigation cleared them of any allegations of voter fraud.

And yet Colin Walsh attempted to smear the Yes on J campaign with the taint of some scandal that had nothing to do with them.

But that wasn’t the end of the controversy.  On the No on Nishi – Measure J page, a local resident, Melissa Hayes, posted: “I just saw a Yes on J college-age student in daisy dukes going door to door in my neighborhood with fliers. So the Yes on J developers are pimps too. Noted.”

Colin Walsh, instead of removing the content or criticizing it, doubled down: “[I] would not want to engage in slut shaming, But I saw someone dressed like that last week. I wonder if it is a strategy they are trying to use.”

This ignited the controversy, as Aaron Latta would respond: “No on Nishi – Davis Measure J organizer Colin Walsh slut shames a female student merely for having differences in their political views and has made defamatory statements about ASUCD Senator Alisha Hacker. Bigotry and dishonesty cannot become politics as usual in Davis.”

Under fire, Mr. Walsh would post: “Pure personal attacks. Look at the posting, read the Aggie article and decide for your self.”  Later, he would add, “To be clear, I speak for myself and I am not acting as a spokesperson for any campaign.” 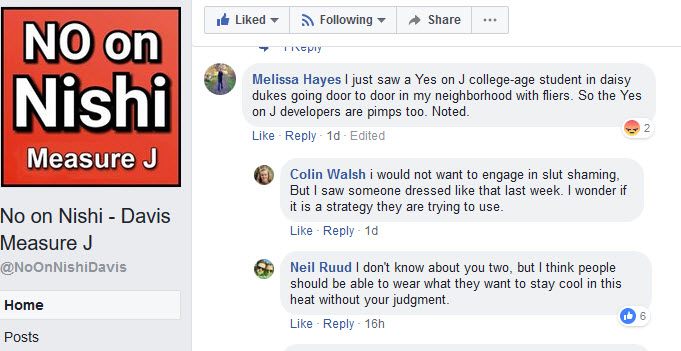 In protest, students went down to council chambers on Wednesday to speak on the Davis Live housing proposal.  Some of them wore “Daisy Dukes” and “high heels” in protest.

Maiya De La Rosa would post, “Colin Walsh has gone too far as to personally subject Senator Hacker to public criticism based on the fact that they have a difference on this one issue. She had devoted an immense amount of time and effort to her position. She is beyond devoted to the work she does with the organization she is involved with. It is already hard enough being a woman in politics, but to have males try to discredit the work that women do is despicable because they believe their opinion is superior.” 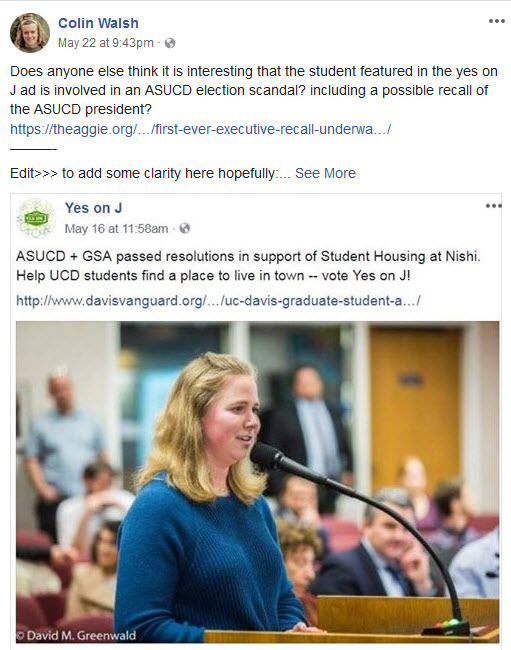 “In no way, shape or form is it okay to slut shame,” she said.  She explained that they decided to wear heels and dress “more sophisticated.”

Alex Meyer explained that the Aggie article was mainly concerned with the ASUCD President, but it did mentioned one of the senators.  She explained, “This community member attempted to try and mischaracterize this particular senator because she was on the same (slate) as the president.”

She said, “He did this as a way to insinuate that she was involved in an election scandal – which really she wasn’t, that somehow because she was also supporting Measure J made her a less trustworthy person.

“He was clearly trying to advance an agenda because he doesn’t support Measure J,” Ms. Meyer stated.  “I told him that as an adult you should take responsibility for mischaracterizing someone intentionally.  And not be upset about the fact that people are addressing that intentionally, but instead he chose to victimize himself and acted very unprofessionally.”

The Vanguard spoke with ASUCD Senator Alisha Hacker, who explained that she woke up to a text informing her that Colin Walsh was going after her personally.  She said, “Once I read further I realized how out of context this was and how irrelevant this was to the overall conversation of Measure J.”

She said most of that article was unsubstantiated claims that have been debunked.  “To use that to malign my character and those who are supporting Measure J by bringing irrelevant information without going through the due diligence of fact-checking…  I found was to weaken the article and take us out of the issue.

“I was hesitant to even respond, but I wanted to get the conversation back to why we’re here, which is housing,” she said.

The Vanguard reached out to Colin Walsh late on Wednesday.  He didn’t directly respond to the controversy and instead directed the Vanguard back to an article he said was criticizing the Yes on Measure J’s tactics.