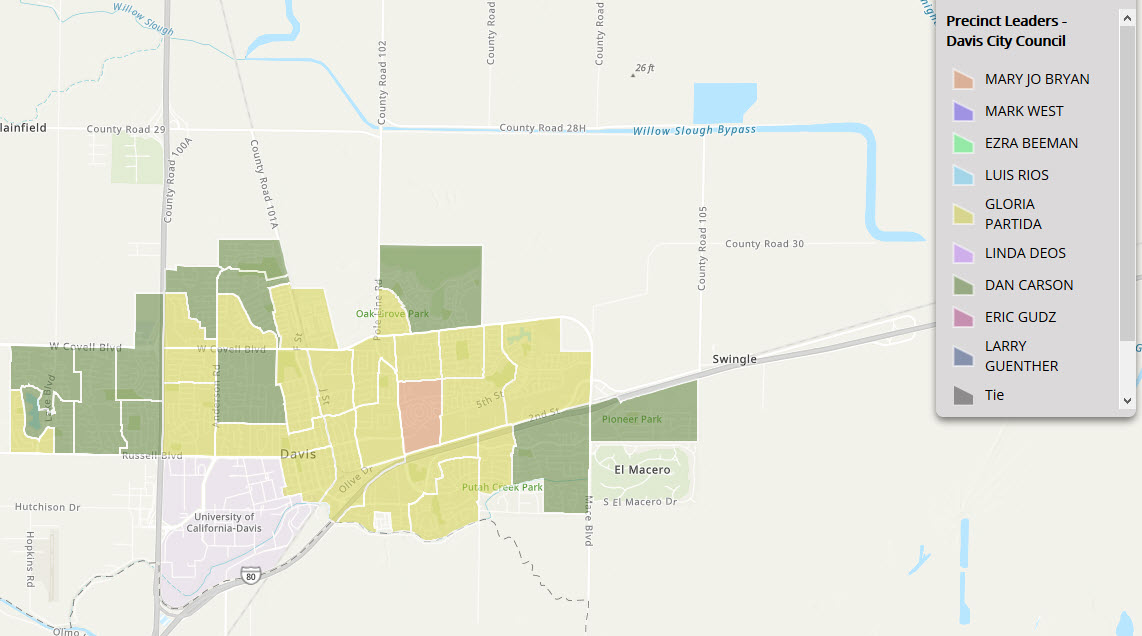 Davis defied talk of low voter turnout in the June election.  The late ballots that came in were rather substantial.  Of the last 18,000 countywide ballots, 8900 or so were located in Davis.  That pushed voter turnout to 52 percent citywide.  For comparison, in 2014 the turnout was just 39 percent.  This race didn’t equal the 66 percent turnout of 2016 when the presidential election pushed record numbers to vote in the council race, but 52 percent for a June election in an off year is substantial.

Gloria Partida won 21 of the city precincts while Dan Carson won 12.  Only one precinct was won by someone other than those two and that was by Mary Jo Bryan, who won her own precinct which contains Rancho Yolo, with Gloria Partida finishing a close second.

While Gloria Partida did well everywhere, there was a clear trend.  The precincts that Dan Carson won tended to be the more peripheral neighborhoods.  These neighborhoods in West Davis near where he lives, in north Davis, in Wildhorse, and South Davis out by Mace tend to be more conservative, more pro-development, and some were more likely to vote for Jeff Reisig in the DA’s race.

It is not that Ms. Partida did badly in these precincts, as she finished second in every one that Dan Carson won, but her strength was clearly in the more progressive core.

Dan Carson did considerably worse inside the core – in the area east of B Street, south of Covell, west of Slide Hill, and north of the freeway, there were six precincts in which he didn’t finish in the top two and only two where he finished second.  Among those were two fourth place and two sixth place finishes.

Perhaps surprisingly the core area was a strength for Gloria Partida and to some extent Linda Deos.  Ezra Beeman and Larry Guenther did better in the core area, but even here, they were not able to compete with Gloria Partida who won all but one precinct – the Rancho Yolo one, where she finished a close second to Mary Jo Bryan.

Two precincts show the problem that old school progressives had trying to compete in this election.

Even in Precinct 18, which was home to both Ezra Beeman and Larry Guenther, Gloria Partida won, albeit by a relatively narrow margin over second place Ezra Beeman.  Here Larry Guenther did finish third with Eric Gudz fourth, Linda Deos fifth and Dan Carson sixth.

A big problem for the old school progressives is that they did not compete citywide on issues.

On paper you would think that perhaps they could capture the bulk of the No on J vote.  No on J finished itself surprisingly weak with less than 40 percent of the vote in an election that did not appear to have a huge student vote.

We will do a full analysis on Measure J at a later point, but for now we will note that Measure J won every single precinct in town.  Even Precinct 18, home to Olive Drive, and also Old East Davis with Ezra Beeman and Larry Guenther, Yes got 229 votes to 184 or 55 percent of the vote.

Still, the No vote got 7572 votes.  So if either candidate that was opposed to Measure J could have captured the bulk of that, they would have had a chance.  Instead, Mr. Beeman receive just 51.7 percent of the votes that No on J received while Mr. Guenther received 37 percent of that vote.

As we pointed out previously it is a good deal more difficult than it would seem to capture a high percentage of the voters opposing a ballot measure because you would have to be able to tie your candidacy to the issue at a fairly deep level.

The biggest take away from this election therefore was the strength of new progressives like Gloria Partida – and Linda Deos who finished third, while the old school progressives like Ezra Beeman and Larry Guenther, the only two candidates opposing Measure J, finished down the ballot, although they didn’t do horribly.  But they finished well off the pace it would take to finish in the top two.

They finished at the top of the second tier of competitive candidates but, for the most part, even in their core area, they were not able to compete in the first tier.

10 thoughts on “Analysis: A Look at the Council Race”