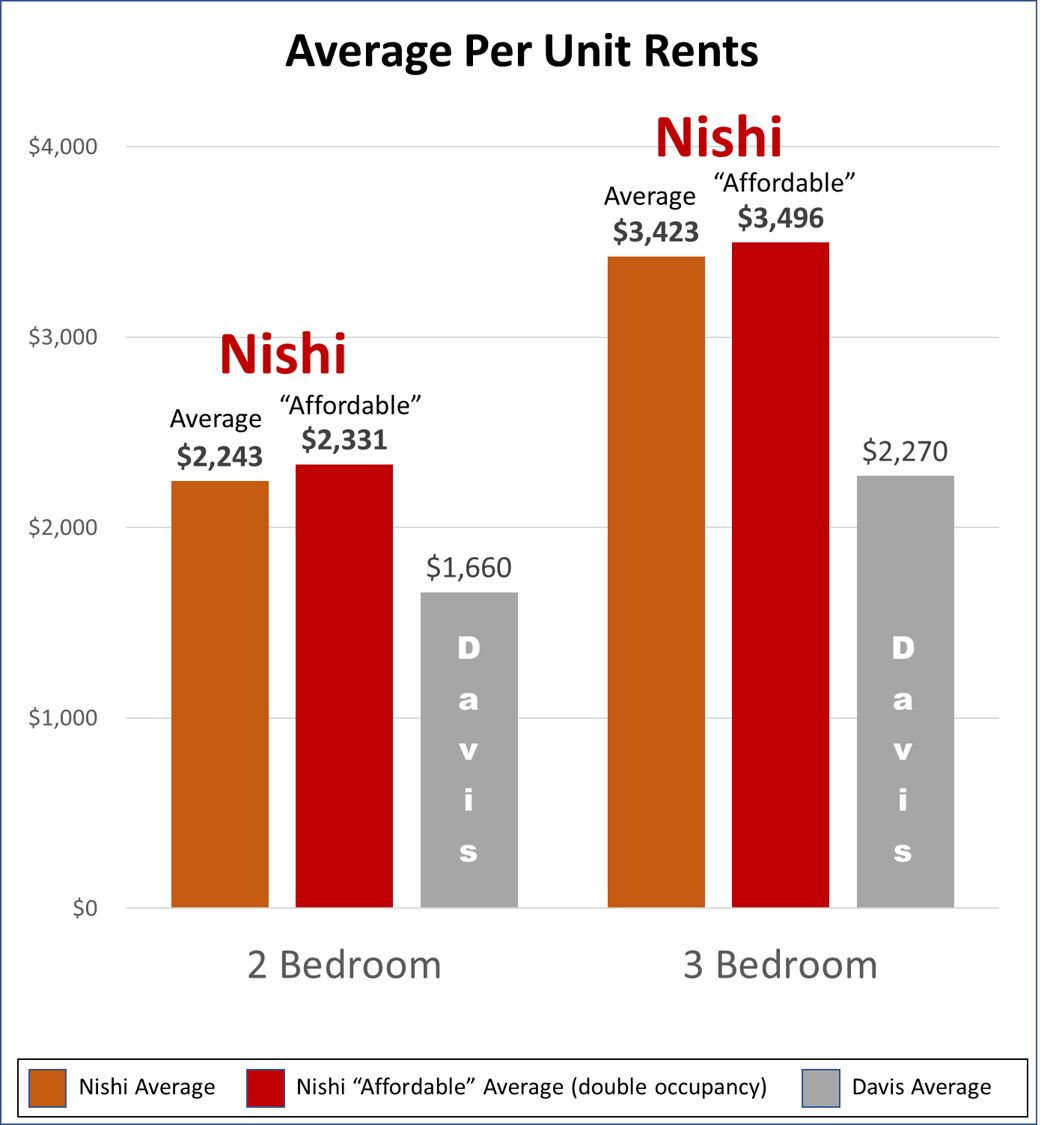 Based on extensive analysis of the Nishi project I did using my long-term professional experience as an affordable housing and city planning consultant, I found that there is a lot of dishonesty in how the project is being marketed by its proponents as “affordable.” The Yes on J campaign website touts its “groundbreaking, privately-funded affordable housing program.” However, when the numbers are looked at more closely, it is just marketing lingo that is covering up for the developers proposing to charge substantially more by running the project with a bed-lease arrangement rather than a room-lease or unit-lease arrangement. Fundamentally, the way the project is structured provides a large profit margin for the developer for the provision of expensive, exclusive housing compared to existing Davis rental rates.

The bottom line is that the ‘market rate’ units–consisting of 90% of the units in the project–will be among the most expensive, if not THE most expensive rental units in town, and even the majority of the ‘affordable’ units will be more expensive than average current city rental rates.

Overall, the projected average unit rents for the whole project (including both the ‘market’ and the ‘affordable’ beds) are 35% and 51% higher than the Davis average for 2-bedroom and 3-bedroom unit leases, respectively:

Also, the project calls for mandatory dense living conditions in which all of the ‘affordable’ beds and a portion of the ‘market’ beds are double-occupancy at two beds per bedroom. When considering just the portion of ‘market’ units that are designated for double-occupancy the affordability gets even worse than the single-occupancy units: the equivalent unit rents are more than twice existing Davis average unit rents. This is because that while with unit leases one can often double-up beds in rooms to reduce rent costs per bed, the Nishi project will charge a much higher rate for the same room with two beds in it.

Because the Nishi project calls for doubling-up of beds in bedrooms for all of the ‘affordable’ beds and a portion of the ‘market’ beds in the project, actual costs per bedroom are significantly higher. In an irony, whereas usually market rate units subsidize the affordable units, for the Nishi project, because the ‘affordable’ units are all doubled-up,  the renters in the majority of the “affordable” units would actually be providing more of a per-unit profit for the project than the the majority of “market rate” units.

some of this is explained and source listed in the asterisked endnotes, I am not including much of it in this article for the sake of brevity. Anyone wanting to drill-down into the points made in the body will find the supporting information in the endnotes.

This project seems to me a deeply cynical and exploitative scheme to provide expensive housing using bed leases as cash cow, and collect huge profit margins while claiming “affordability.” If the developers were really responding to the need for more affordable rentals in Davis as they are marketing the project, they would be building a range of 2-, 3-, and 4-bedroom units where rental rates calculated per bed would be at the $600-700 level, in-line with current average Davis market rates, and allow doubling-up on a selective basis while charging the same room rent. Instead, they will be leasing by the bed at massive premiums.

I have seen arguments that attempt to apply simplistic Econ 101 thinking about an increasing supply of housing cutting overall costs, saying essentially that “even if the project isn’t affordable, at least it will still increase the housing supply and will cause downward pressure on rents.” This sort of trickle-down thinking for affordable housing provision is the subject for another analysis. However, I can say that it does not take into the many complex dynamics and characteristics of housing markets. While a supply “shock” of the magnitude of the Nishi project could theoretically put downward pressure on rents, the effect is likely to be much less than we would hope for.

Among the reasons for this include the fact that local housing markets do not exist in a vacuum and are subject to regional influences (and sometime international influences in the case of investment properties). Furthermore, there isn’t one monolithic “housing market” at the local level, but rather multiple markets based on income level. For example, there is increasing research about the bifurcation of housing markets where an increase in the high-end expensive housing supply can keep prices contained in that market, but have little no effect on the middle- to low-income housing markets.

The “filtering” mechanism for housing works only in the long term, and there are many factors such as latent/pent-up demand and assumptions about the price elasticity of consumer demand that can keep an increased housing supply, especially high-end housing, from mitigating price increases significantly. There is some evidence that high-end housing especially, while increasing supply (at least for that tier of housing), can actually induce demand for more housing and shift the market demand curve such that there are price increases.

Finally, we have limited opportunities for affordable housing projects in Davis. To the extent that an exclusive high-end project that doesn’t address affordability gets built on a site, it means that a good project that addresses affordability and inclusivity cannot. That represents a lost opportunity for the affordable units that COULD be built on the Nishi site (if it is indeed an appropriate site for residential uses at all: a whole different debate) with a project that paid more than lip service to the issue.

Rik Keller has 17+ years of experience in affordable housing policy & analysis in Texas, Oregon, and California after obtaining his master’s degree in city planning; he is also a 10+ year Davis resident and a current renter.

*** Project proponents have also stated that the Nishi ‘market rate’ rent would be around $900 per bedroom and that is is in-line with existing rental costs in Davis. This claim is false in two ways: 1) the projected rents for the project are higher, and 2) existing Davis rents are significantly lower.

As described in the 2017 BAE rent survey only 13 percent of units in Davis are rented under bed lease arrangements and they are much more expensive than the vast majority of rental units. While the Nishi project will be leased by the bed, the use of the “average rent by the bed” statistic is a misleading comparison as it does not provide an accurate indication of actual existing rents across Davis, because bedroom leases make up only a small fraction of all rental units, because they did not convert unit leases to a per-bed equivalent, and because below market rate units were not included in the average rents in the BAE analysis at all.

Interestingly the text changed on the campaign website when I started making comments about a week ago on various social media posts about how deceptive the marketing was. On the “Facts” page of the campaign website and in on-line ad campaigns, there was previously a claim made that average rents in Davis were $890. I had commented in several social media and other online locations about this deception and I see that, as of this writing, the campaign changed the claim to remove any specific dollar amount and replace it with this more vague (but still misleading) statement ”According to the 2017 Vacancy and Rental Rate Survey, this would be the lowest bed rent in all of Davis.”

**** Using data in the BAE report, I calculated the average rents per bed for market rate leased units (making up 87% of the units in the BAE survey) by bedroom size by using the beds per bedroom rate for bed lease units in the survey as the following: $790/bed for 2-bedroom, $709/bed for 3 bedroom, and $595/bed for 4-bedroom units.These numbers are likely still high as doubling-up is more likely in unit leases than in bed leases.

***** See the “Affordable Housing Plan” on p. 61 of the Approved Development Agreement (http://cityofdavis.org/home/showdocument?id=9031)

“There will be no distinction made between the Affordable Beds and beds rented at market rate, except that market beds may in one-bed bedrooms while all Affordable Beds are anticipated to have two beds per bedroom.” What I make of it is: that’s a pretty big exception! What it means is that the developer is proposing to cram two students per bedroom in the ‘affordable’ bedrooms while the vast majority of rest of the project will be one student per bedroom.

******* A temporary amendment to the City oF Davis affordable housing requirements put in place a 15% “alternative requirement” that could be met instead of the standard 35% requirement.There are apparently other project amenities that address some of 9 different criteria laid out in the City’s ordinance. However, I have not seen any analysis about what exactly these consist of, nor a fiscal analysis of these benefits compared to the opportunity cost of not providing the 35% affordable housing component. And I have not seen any fiscal analysis that a 35% affordable component would not be achievable on that site.

Share:
Tags:Affordable HousingMeasure JNishiStudent Housing
Previous : Monday Morning Thoughts: A Long List of Authors with a Long List of Problems with Nishi, but…
Next : Masterpiece Supreme Court Decision: The Bakery Wins the Battle but Loses the War

40 thoughts on “An Examination of the Affordability of the Nishi Project/Measure J: Expensive and Overcrowded”