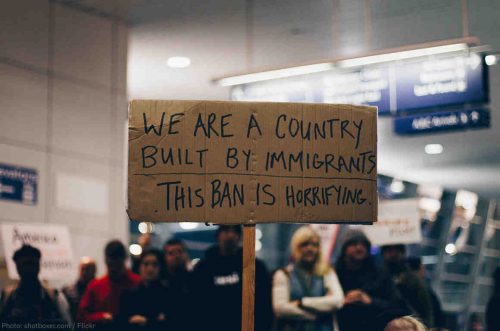 That a US Supreme Court would deliver a decision going against civil rights and protection of the weak and vulnerable should come as no surprise.  After all, time and time again in this nation’s history the court has had the chance to act as a brake against government power and tyranny and has failed to deliver.

Whether it was Dred Scott, Plessy, or the Korematsu decision that they ironically overturned yesterday, the court has failed in real time to protect the rights of the minority against the tyranny of the majority.

However, if the court majority would rule against the rights of the minority, it would not do so without a fight.  Justice Sonia Sotomayor delivered an unwavering dissent.  As the New York Times described, she read, “The United States of America is a nation built upon the promise of religious liberty. Our founders honored that core promise by embedding the principle of religious neutrality in the First Amendment.”

Wrote the Times, “For the next 20 minutes, she remained resolute as she delivered an extraordinarily scorching dissent, skewering the court’s decision and condemning the ban as ‘harrowing’ and

‘motivated by hostility and animus toward the Muslim faith.’”

She charged that the Supreme Court had failed to “safeguard that fundamental principle.”

In the dissent, joined by Ruth Bader Ginsburg, Justice Sotomayor charged that “a reasonable observer would conclude that the Proclamation was motivated by anti-Muslim animus.

“The majority holds otherwise by ignoring the facts, misconstruing our legal precedent, and turning a blind eye to the pain and suffering the Proclamation inflicts upon countless families and individuals, many of whom are United States citizens,” she wrote.

“Ultimately, what began as a policy explicitly ‘calling for a total and complete shutdown of Muslims entering the United States’ has since morphed into a ‘Proclamation’ putatively based on national-security concerns,” the justices wrote. “But this new window dressing cannot conceal an unassailable fact: the words of the President and his advisers create the strong perception that the Proclamation is contaminated by impermissible discriminatory animus against Islam and its followers.

“[D]espite several opportunities to do so, President Trump has never disavowed any of his prior statements about Islam,” the justices wrote. “Instead, he has continued to make remarks that a reasonable observer would view as an unrelenting attack on the Muslim religion and its followers.”

The dissent finds “stark parallels between the reasoning of this case and that of Korematsu v. United States.

“By blindly accepting the Government’s misguided invitation to sanction a discriminatory policy motivated by animosity toward a disfavored group, all in the name of a superficial claim of national security,” the dissent reads, “the Court redeploys the same dangerous logic underlying Korematsu and merely replaces one ‘gravely wrong’ decision with another.”

The Supreme Court today rejected the challenge to President Trump’s Muslim Ban. In its 5-to-4 decision, the court failed to make good on principles at the heart of our constitutional system — including the absolute prohibition on official disfavor of a particular religion. The fight against the ban will continue, but the court’s decision is devastating. History will not be kind to the court’s approval of an unfounded and blatantly anti-Muslim order.

By now the story of this shameful policy is familiar. During his campaign, Trump issued a statement calling for “a total and complete shutdown of Muslims entering the United States” — which remained on his website until well into his term in office. That was hardly a stray comment. Rather, over and over, both before and after the election, Trump expressed his animus for Islam and Muslims and tied that animus to his proposed immigration ban.

Just one week into office, Trump attempted to make good on the campaign promise, issuing a sweeping ban on over a hundred million Muslims without even consulting the government’s national security experts. Courts rejected that first version as well as the order the administration crafted to replace it. Finally, those temporary measures were replaced by the current proclamation, which likewise bans over 150 million people — approximately 95 percent of them Muslim. As Justice Sotomayor explained in her dissenting opinion, Trump’s consistent messages and actions paint a “harrowing picture, from which a reasonable observer would readily conclude that the Proclamation was motivated by hostility and animus toward the Muslim faith.”

Nonetheless, the court today rejected the constitutional challenge to the ban. Applying deference to the president despite the evidence presented, the court explained that it would “uphold the policy so long as it can reasonably be understood to result from a justification independent of unconstitutional grounds.” The court then concluded based on the record in the case that the ban had “a legitimate grounding in national security concerns, quite apart from any religious hostility.”

As Justice Sotomayor cogently explained, the majority could reach this conclusion only by “ignoring the facts, misconstruing our legal precedent, and turning a blind eye to the pain and suffering the Proclamation inflicts upon countless families and individuals.”  In this respect, as she noted, the case repeats some of the worst mistakes the court has made in the past.  In particular, the parallels to Korematsu v. United States, the court’s 1944 decision upholding the incarceration of Japanese-Americans, are striking.

As in that case, the court today paid lip service to the vital constitutional values at stake, but it willfully ignored the reality of the situation. The majority today repudiated Korematsu, saying it “was gravely wrong the day it was decided.” But as Justice Sotomayor pointed out, then, as now, it was clear to those willing to look at the evidence that the government’s policy was not about safety but prejudice:

“By blindly accepting the Government’s misguided invitation to sanction a discriminatory policy motivated by animosity toward a disfavored group, all in the name of a superficial claim of national security, the Court redeploys the same dangerous logic underlying Korematsu and merely replaces one ‘gravely wrong’ decision with another.”

Today’s decision is devastating. Whatever the court may have intended, the message it relays to Muslim communities around the country and around the world is that our Constitution tolerates transparent discrimination and animus against Islam. It undermines our standing to encourage tolerance and pluralistic democracy abroad, and it reinforces the intended message that Muslims — and immigrants, people of color, LGBT communities, and other marginalized groups — are not welcome in Trump’s America.

But this fight is not over.

Indeed, the greatest repudiation of Trump’s anti-Muslim policy to date was not delivered by any court. Instead, it was delivered by thousands of people spontaneously coming together at airports across the country to declare that we will not stand for hatred and discrimination.

57 thoughts on “SCOTUS Upholds the Travel Ban on a 5-4 Vote, but Not Without a Fight”