The final results are in and Measure J not only won, but won overwhelmingly by a 60.5 to 39.4 percent margin.  The Vanguard has analyzed the precinct level data and found that one of the keys is that the core which had voted overwhelmingly against Measure A now flipped to, in many cases, heavily support Measure J.

Making this result all the more remarkable is there really is no evidence that students came out in large percentages to the polls.  In fact, to the contrary, it seems the student vote – despite heavy efforts by groups like the Measure J campaign, the College Democrats, ASUCD and the Eric Gudz campaign – was relatively low.

In 2016, when Measure A lost by just about 700 votes, Nishi lost 21 precincts and won just 13.  The landscape massively shifted in 2018.  Measure J won every single precinct in the city, 18 of them with more than 60 percent of the vote – including 10 of those which had previously voted against Nishi in 2016.

The heart of the city, which had heavily voted against Measure A in 2016, swung heavily, for the most part, by 15 to 25 percent in favor of Measure J.

A key question is what accounted for this rather drastic change in the landscape.

The proponents of Wildhorse Ranch in 2009 spent over quarter of a million and lost 75-25 on Measure P.  And of course, in 2016, the proponents of Nishi spent over $300,000 and lost by 700 votes.  Clearly, money is not the key variable to explain the change.  In each previous case, opponents of the measure were heavily outspent. 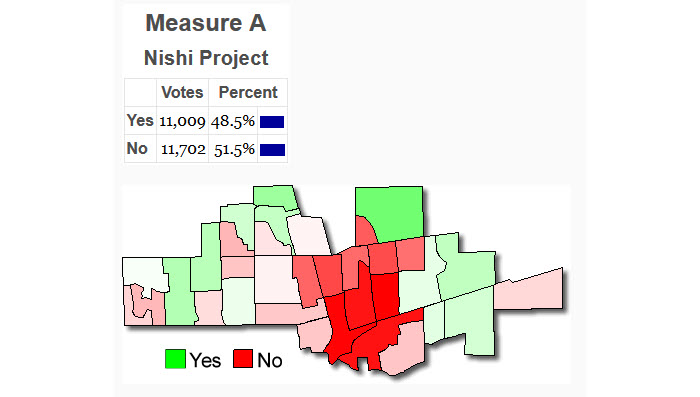 I am not going to dismiss the money factor, as clearly the campaign was built around the availability of resources, but just as clear, money itself does not explain why Measure J succeeded where the three previous projects failed.

I am going to argue that there were four key factors that explain the outcome.

First of all, while you can argue Nishi 2016 was superior, Nishi 2018 addressed the two main reasons why Nishi 2016 lost.  The developers made the access to be on-campus only, which removed the concerns about traffic impacts on Richards Boulevard.  The developers also addressed the issue of affordable housing, which badly hurt the 2016 effort.  They created an on-site, student-based affordable housing program.

You can also argue that, although opponents continually raised the issue of air quality, by making the site rental housing for students the developers limited the impact even of that issue.  Although it was not for lack of the opposition trying.

At the outset, we believed, based on those three changes alone, Nishi ought to win and win easily.  And I would argue it eventually played out that way.  Several of the weaknesses of the No campaign were due to the fact that they simply did not have that much to work with.

The Enterprise in their editorial didn’t use the term crisis but called Nishi “a remarkable effort to meet the biggest need in Davis, the thousands of UC Davis students who cram into single-family homes all around town.”

Some opponents tried to argue it wasn’t a crisis, claiming that a long-running problem is not a crisis.  While I disagree, those are primarily semantics.  What isn’t semantics is the fact that students are cramming into houses designed to be single-family homes, there are students who are housing insecure, students living on couches, in cars, sleeping in the library.

The discussion shifted in two years, and the fact that the Nishi project focused exclusively on the biggest need in this community certainly did not hurt the project.

Third, the opponents of Measure J just ran a bad campaign.  If you want to argue that the opponents just lacked the material to mount a credible attack on the project, I think you are correct.  That would seem to suggest that maybe they should have just conceded electoral defeat.

From the start, we suggested that a problem with the opposition was that the one real issue they had was air quality.  We didn’t see that as sufficient to drive a significant no vote because it lacked the self-interest component that issues like traffic have had in the past.

As many are aware, I dispute many of the claims by the opposition on the quality of the air.  It is not that building next to a freeway is ideal, but we do need to put it into perspective.  The developers were willing to take mitigation measures to address some of the impact.  You can argue those mitigations won’t be as effective as the developers claim – but, given that a lot of the impact studies are based on older and less mitigated projects next to a freeway, it is a factor.

In the end, we believed that a combination of short duration, vegetation, air filtration and pressurizing of the buildings would reduce impacts on health.  We are also far from convinced that Nishi was really that much worse than other locations, and I think most people in the community saw the efforts to push for more study as an effort at delay.

Once the air quality issue was blunted, it left the opposition with very little to hit on.

As one observer put it: “What if the no people made a few arguments that were so lacking in credibility that it swung the election to ‘yes’?”

I don’t know if I would go that far, but some of the arguments just lacked credibility.

You had the claim that Nishi was going to lose $350,000 to $700,000 a year.  I don’t care how many charts someone lays out, a lay person examining that argument is going to say that this is basically an apartment complex, how in the world does it lose that much for the city?  It didn’t pass the smell test.

Then you have the litany of weird red herrings that sounded absurd and more than desperate.  I think the average person listened to this stuff and discounted it as an attempt to throw everything against the wall and see what stuck.

At the end of the day, there appears to be a solid 38 to 40 percent of the voters who are going to vote against every project.  There is a much smaller number that will vote for most, if not all, projects.  I would then estimate a malleable middle of somewhere between 20 and 40 percent of the voters.  It appears that Nishi captured most of that malleable middle and that the opposition got just about the core No vote and little else.

Did money drive this result?  Again, I won’t discount money.  You have to get your message out to the public, even in a relatively high information environment like Davis.  But I think the facts are what led to this outcome and the opposition to Nishi basically had one real argument: I’m against housing at Nishi.

To the credit of the voters, the kitchen sink approach did not work this time.  To the detriment of the opposition, they tried it and I think they hurt their credibility going forward.

28 thoughts on “My View: Why Did Measure J Succeed Where Others Failed?”