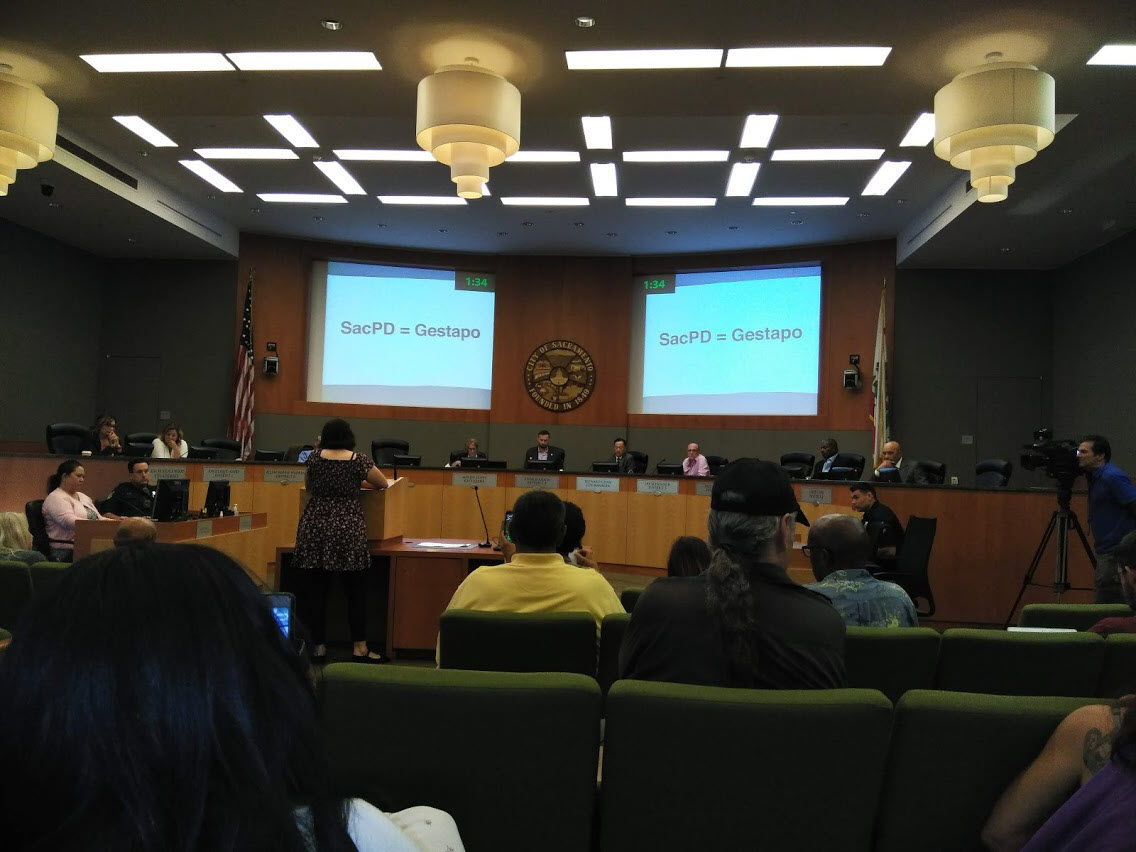 SACRAMENTO – The Sacramento City Council – its weekly meetings under fire and under siege for more than a year by frustrated community members because of civilian killings by the Sacramento Police Dept. – planned to approve new, and probably unconstitutional, provisions to restrict free speech Tuesday night in an apparent attempt to avoid criticism by the public.

But, the council was hit by a “cease and desist” complaint for violating the state’s Brown Act.

And, in the end, the Sacramento City Council pulled the controversial “rules of decorum” changes from the consent calendar. But, still, the uproar from the public at large, civil rights organizations and others turned yet another weekly meeting into a near free-for-all.

The new decorum rules would have made it possible for the council to not only toss out unruly public members, but do so based on their speech, by outlawing “vulgar” language among other things. It would also have allowed the council to ban members of the public for months for violating the so-called “rules of decorum.”

“Because of statements by the public, we are withdrawing this item…we’ll be making changes if it comes back,” said councilman Steve Hanson, filling in for Mayor Darrell Steinberg, who has often been the target of loud and demanding demonstrators over the past year.

But it was too late. The barn door was open for the already upset public.

Black Lives Matter Sacramento, and scores of organizations and individuals, served the council in the middle of the meeting with a Brown Act Complaint for violating the state’s open meeting laws by restricting the speech, noting, “Unless the speech itself constitutes a threat of physical harm—which it did not at either above-referenced meeting– it is protected, and even insulting or offensive

remarks must be allowed.”

The complaint specified that “Restrictions on speech, such as those implemented by Mayor Steinberg at Council meetings including but not limited to the June 26, 2018 and March 21, 2017 meetings, constitute viewpoint discrimination, and suggest an attempt to limit comments towards maintenance of the status quo rather than robust public dialogue on issues of critical importance that necessarily raise strong emotions from members of the public wishing to comment.”

The council has 30 days to “correct or cure” the violations of the Brown Act or face judicial action.

The National Lawyers Guild of Sacramento, one of 200 chapters in the country, also ripped into the council.

“We are dismayed to see the proposed revisions to the Sacramento City Council’s public meeting rules now on the consent calendar for your July 24 meeting,” wrote National Lawyers Guild Sacramento Chapter president Elizabeth Kim in an open letter to the council members.

The NLG, the oldest integrated bar association in the U.S., criticized the council, noting that “these proposed rules fly in the face of that first amendment interest and should be rejected by the Council (which) seems intent on ignoring both the spirit and the directives of the Brown Act by attempting to create unnecessary restrictions on the public’s ability to participate in Council meetings.”

The NLG quoted the Brown Act language that specifically refers to the power of the people over government agencies:  “The people of this State do not yield their sovereignty to the agencies which serve them. The people, in delegating authority, do not give their public servants the right to decide what is good for the people to know and what is not good for them to know. The people insist on remaining informed so that they may retain control over the instruments they have created.”

The frustration expressed by the public “comes from a place of pain” and “they have a right to do so,” added Kim, who offered mediation services between the community and council.

Other speakers were not so polite. SacPD = Gestapo signs dotted the council chambers as one speaker after another challenged the council.

One speaker admitted, “I’m scared for my life” because of police killings and shouted that “they don’t care about Black lives. Now they try to silence us…that’s fascism.”

Another speaker said: “You worry about decorum (when) people come at you about their child being killed by police in their backyard, or when police run over people. Do something.”

While speakers said the council’s actions were akin to “throwing a tantrum,” others said there was a “crisis in leadership” in city government, from the killings of people of color by police to decisions to moderate criticism of the police and council.

Some activists observed that Tuesday’s proposed “decorum” rule changes would have given Steinberg the power to legally oust speakers he didn’t agree with – hence, why BLM and others filed the “cease and desist” complaint.

The NLG letter warned the council to follow current law, not create laws that are illegal.

“We urge the Council to reject these revisions to its rules and to instead listen to the public, create space for expression of dissent, and to sparingly use the tools already provided by the Brown Act to deal with ‘actual disruptions,’” read the letter.