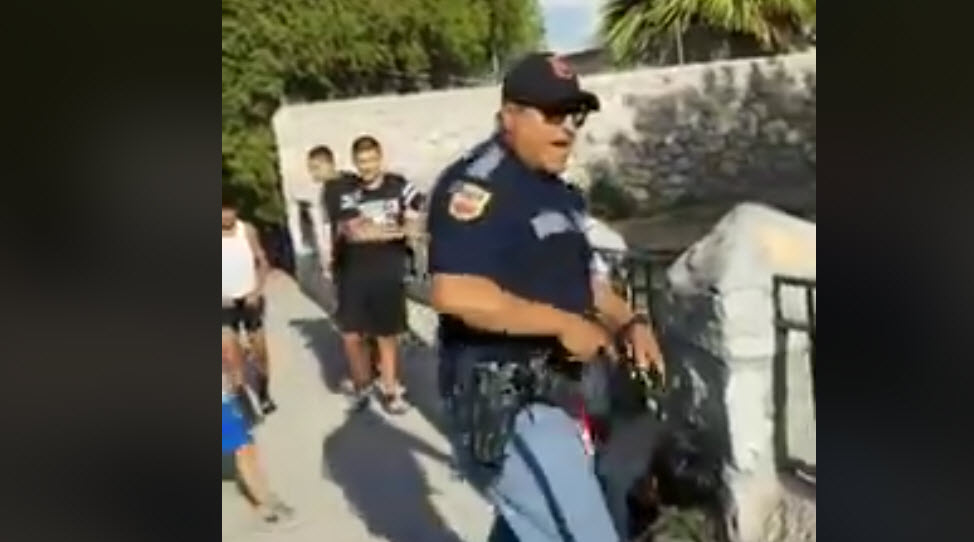 Over the past week, a Facebook video went viral, showing an El Paso police officer drawing his gun on a group of Latino kids outside a community center and handcuffing the person taking the video. The video has drawn outrage — and rightly so — as an illustration of the urgent need for robust police policies and training emphasizing de-escalation and how to interact with youth.

The video cuts in when the officer has one of the kids detained on the ground. The other kids — upset about what’s going on — yell at the officer. In response, he draws his gun, points it at the group, and yells, “Back up, motherfuckers!” Another officer runs up, and they drag the detained kid to the roadside. While the second officer cuffs him, the first officer returns to the group with his nightstick out, yelling at the kids to “get back.”

Seeing that the other kids are getting upset, the kid with the camera yells over, “It’s all good, wait, we’re going to put a report on these two fools. It’s all good.” The officer then approaches him and places him in handcuffs. After the kid’s mom takes the camera, the officer directs her to come over to him. When she runs away, he threatens, “I know where you live!”

Shortly thereafter, the officer goes back to the kids and asks them what they’re going to do. He challenges them: “Do something! Do something!” He moves chest-to-chest with one of them, staring aggressively down — and ends up bringing that kid to the police car too,

The video captures a police officer acting contrary to his sworn oath to protect and serve. Instead of de-escalating the situation using techniques designed to calm everyone down and avoid violence, the officer raised the stakes. And when another kid tried to de-escalate the situation by telling the kids he had everything on video — which the First Amendment gives him the right to do — the officer arrested him and put him in the back of the patrol car.

De-escalation is one of the most important strategies for policing. The Police Executive Research Forum (PERF), an independent research organization, calls it the “preferred, tactically sound” approach for resolving incidents and recommends that it should be a “core theme” of any agency’s training program. Without de-escalating situations, officers create opportunities for unnecessary use of force with devastating consequences for the communities they are supposed to serve.

Although many police departments across the country have some form of de-escalation referenced in policies and training, police departments generally place much more emphasis in training on using force instead. A 2015 PERF study of 280 departments across the U.S. found that for every hour recruits received on de-escalation training, they received over seven hours of firearms training. De-escalation training needs to be emphasized for all officers serving their communities. Otherwise, we wind up with situations like the one in El Paso.

For similar reasons, officers also need clear policies and training on interacting with youth. Even though juveniles are only involved with 3.5 percent of all police interactions, they make up 30.1 percent of all interactions where police use force (the vast majority of which are initiated by officers).

Strategies for Youth, which specializes in research and evidence-based training for law enforcement, has found that “a little bit of knowledge about how teens think can go a long way toward avoiding the escalation of minor incidents.” It’s “how officers read the youth and the incident” that affects how the incidents go down. Unfortunately, few officers receive this type of training in any meaningful way. In Texas, the most recent survey of hours spent on juvenile justice training for new recruits showed an average of just 2 percent of total training time.

According to Strategies for Youth, “The critical factor in the youth’s response and perception of the legitimacy of police authority is how an officer approaches a youth.” The El Paso kids in the video were insulting the officer — but responding aggressively and with violent displays of force was counterproductive, not to mention counter to the professional standards we should hold police officers to.

Interactions like these reinforce the serious disadvantage youth of color already experience and recognize in their interactions with police, which have lasting and radical effects in our communities. And arrests like the ones in this video for “youthful disobedience rather than significant crimes” funnel kids of color into the criminal justice system, triggering a chain of events that can disrupt the rest of their lives.

The El Paso Police Department as well as police departments across the country must ensure that their policies and their police training allow officers to automatically de-escalate situations and respond to youth effectively. The kids in this video are the canaries in the coal mine.

Kali Cohn is a Staff Attorney with the ACLU of Texas