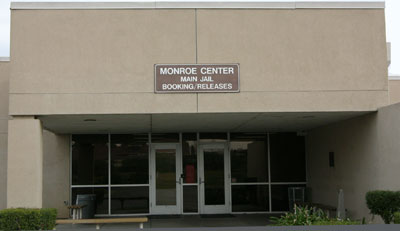 Attorney Michelle Spaulding, representing Lyle Nooner, put on the record her difficulties, particularly in the last past week, in seeing her client and trying to prepare for trial.

She told Judge Janene Beronio that both she and her paralegal have been refused visitation with Mr. Nooner, with claims he is refusing to see them, even as she has had repeated contact with him assuring her that this is not true.

“We need access to him,” she told Judge Beronio as she briefly outlined complaints against Sergeant Winnecker as to misconduct and excessive force against Mr. Nooner.

“He has suffered significant injuries as the result of these incidents,” she told the judge, as she explained he is no longer able to walk as the result of a knee injury suffered – and she has no idea how serious it is because he has not received medical treatment.

In the most recent incident, she explained that on Friday, her paralegal was told Nooner was refusing to visit – even though she had received a message from him earlier that day, asking when the paralegal

Ms. Spaulding herself was turned away the next morning.  Mr. Nooner, she said, told her that he was never even told she was at the jail.

Deputy County Counsel Bob Martinez argued that the ex-parte motion was legally deficient, however, he suggested that they work this matter out informally.  Judge Beronio sent Ms. Spaulding and Mr. Martinez to discuss the matter.

They returned about an hour later with a resolution.  Ms. Spaulding told the judge that she will withdraw her motion.  They have agreed to workarounds to facilitate visits, including that Ms. Spaulding would no longer be turned away for visits, and if the COs (correctional officers) have difficulty getting Mr. Nooner to cooperate, she would be called in to intervene at that point.

They arranged for a doctor to come in to see Mr. Nooner this weekend.

Mr. Martinez told the judge that they appreciate the gravity of concerns regarding access to Mr. Nooner, and the county counsel’s office will take steps to ensure the cooperation of the jail staff and sheriff’s department.

In the meantime, the Vanguard has received a copy of the complaint filed on Thursday by Ms. Spaulding on behalf of Mr. Nooner against Sgt. Winneker and 13 other officers, going as high up as Captain Carter Vaughn.

She writes: “It is my belief based on what Lyle has told me, and what I have witnessed and experienced personally, that the issues with access stem directly from animosity that Sgt. Winneker holds against my client.”

She notes, “The acts of brutality and harassment and generally unacceptable treatment of Lyle Nooner have occurred since he came to the Monroe Detention Center on December 27, 2016. He took his lumps (set out below) as a lesson in humility until the recent early morning cell extraction where the guards took the abuse too far and ‘blew his knee out,’ according to Lyle. He has since been denied proper medical treatment and subjected to daily humiliation.

“Now he is even being denied access to counsel, implicating and abrogation his rights under the facility’s own policies and procedures, Title 15, and the 6th, 8th, and 14th amendments to the federal constitution. My paralegal and I have left the jail without having been able to see our client five times four days in a row.

“The recent escalation situation started with an ill-considered smartmouth comment Lyle made to Sgt. Winneker, in response to verbal abuse by the Sergeant. This angered Winneker so much, Lyle could feel something building for a few days. The guards hassled him more than usual, one of them telling him he didn’t want to, but his Sergeant was making him do it.”

Ms. Spaulding then specifically chronicles several incidents, including the June 9 cell extraction which the Vanguard reported on its initial article.  Ms. Spaulding describes it, as 10 officers came to Mr. Nooner’s cell in the early morning hours.

She writes that Sgt. Winneker was outside the cell door saying, “I don’t want to do this to you Nooner.”

She writes: “They twisted his arms and legs as though to break them. This continued after he was shackled although he had not been resisting in the first place. They kneeled on him – on his back and stomach, but paying particular attention to his knees, as all knew his knees were injured and weak and it would take less effort to produce a more painful response. His body obliged and his knee made a horrible sound as it popped, or ‘blew out’ as Lyle describes it.”

“This was all supposedly because he had a thin towel or piece of cardboard over a hole in the broken light shroud over his bed, because he couldn’t sleep with the exposed bare bulb shining directly in his face,” Ms. Spaulding writes.

Ms. Spaulding additionally documents the “Doggie Diet” where he was served cold food product formed in the shape of dog feces, and other acts of “brutality and harassment” that resulted in “severe injuries in the past to his neck, back, and legs.”  She notes, “He has been in and out of a wheelchair – currently in since the cell extraction, as he can’t bear weight on his knee anymore.”

Officer Castaneda dragged him down to the floor and twisted his body, kneed him all over, elbowed him, applied pressure.

She writes: “His complaints and grievances were often thrown away. They spit in his food They have taken his canteen and books on several occasions.”

In October, Officers Baletori and Dewitt held him while a third officer, Gilberts, “punched him several times in the throat, nearly crushing his windpipe and leaving him with football-sized bruising.”

Ms Spaulding writes: “A defense investigator saw and noted this bruising near that time, although Lyle didn’t want to file anything at that point.”

Ms. Spaulding writes: “Lyle backtalked Officer Prock when she was acting like a bully at meal time. She responded by repeatedly slamming his already-mangled hand in the slot, then threw his tray at him.”

Finally, Ms. Spaulding complains of general bullying from COs Frost, Herrera, Nakamura and Hall.  She writes: “These four CO’s constantly bully and threaten Lyle and try to make his life miserable. Frost and Nakamura bully him whenever nearby. Herrera verbally threatens to take him to booking (a threat to take him where there are no cameras and hurt him) and takes his canteen and throws it away. He writes up Lyle for having contraband, yet hasn’t even searched. Hall participates in the bullying and laughs at Lyle when he attempts to enter a grievance or complaint – notably in particular recent issues with the light shroud, with the light never shutting off and shining in his face 24-7, even when trying to sleep.”

In conversations with Sheriff Ed Prieto, the Vanguard has been told that his discussions with the jail staff indicate that Mr. Nooner is a discipline problem and refuses to cooperate with the COs or staff.

In correspondence from the sheriff’s secretary, this was communicated: “All allegations regarding the treatment and complaints regarding inmate Lyle Nooner are being investigated, however at this time in the investigation none of these allegations have been able to be found valid.”

By filing a formal grievance, Ms. Spaulding has now necessitated a formal investigation.

One thought on “Defense Reaches Agreement with County Counsel on Visitation; Files Complaints with Sheriff’s Department for Excessive Force”