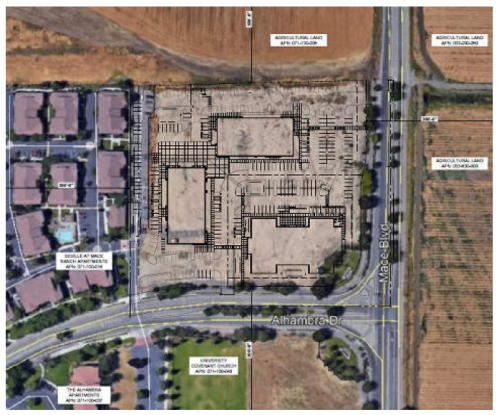 One would think that plans to put an office complex on the corner of Mace and Alhambra, a long underutilized location, and not only fill it with a business park but also a business park that allows the Nugget Market corporate headquarters, is not only a huge coup for the city, but also a win-win for all involved.

According to the staff report for the planning commission, set to hear the project on Wednesday, “The project is the construction of three commercial buildings on the parcel at the northwest corner of Mace Boulevard and Alhambra Drive. The project includes a two-story 32,220 square-foot office building closest to the corner, and two 16,200 square-foot R&D/office buildings.”

The big thing is that the parcel, nearly six acres, is currently vacant except for providing overflow parking for the adjacent apartment complex – a function that is supposed to remain.

The site has been vacant since the 1989 approval of the Mace Ranch project.

The site was proposed for office uses.  In 2006, the city rezoned the site for a neighborhood retail center.  But in 2014, an application “was submitted to the City for a Final Planned Development, Design Review, and Tentative Map for a 55,600-sf office/medical/retail development with four buildings on four separate parcels. The application was deemed incomplete by the City and subsequently withdrawn by the project applicant.”

Staff believes that the slight changes to the designation, as neighborhood retail use to business park, would allow the intended use in addition to the R&D uses proposed for the back of the site.  Limited accessory retail could support the office R&D uses.

In the initial study, they found, “Trip generation associated with development of the proposed project would be considerably less than buildout of the site per the site’s current land use designation. The relatively small amount of traffic that would be added to the Mace/Alhambra intersection is not anticipated to substantially affect intersection operations.”

You would think that moving the headquarters to Davis of a well-respected local company like the Nugget would be cause for celebration – especially during a time when the city is desperately in need of economic development of this sort.  And this doesn’t even substantially change land-use designations or require annexation of new land.

Indeed, Councilmember Lucas Frerichs was excited.  On Sunday in the wee hours of the morning, he posted on Facebook, tagging a number of others: “(Hopefully) Coming soon!! Welcoming the new corporate headquarters for one of the country’s consistently best rated “companies to work for”; this is great news for Nugget Markets and a major economic win for the city of Davis! The Planning Commission sees it this week, with City Council approval expected at our July 31st meeting.
#NuggetMarkets #DavisCA.”

And why wouldn’t he?  What is the downside to this?  An underutilized parcel?  An infill project?  A spot already designated for commercial use?  And we can get Nugget to come to Davis – as they should have long ago?  We should be rolling out the red carpet for them.

Yesterday, the Vanguard asked where leadership should come from – seems to me that having the welcome mat rolled out is the least we can expect if we want to compete for economic development.

And yet, we have complaints.  The first person to post on yesterday’s article which was not even about this project called the project “a joke” and complained that we lack sufficient mode share for bicycles.

In a comment on the Vanguard they wrote, “They do their own analysis showing a 4% modal share for bicycles, about 1/7 of the current goal for cycling to work. The report states that two Unitrans bus lines serve the area, but it’s only one, and this runs every 30 to 60 minutes, accounting for another 4% modal share (unless because they made that bus lines serving mistake, it’s only 2%!).”

Never mind the initial study found that this project would only generate a “relatively small amount of traffic.”  One of the problems in Davis is we fail to recognize that, sometimes, the perfect is the enemy of the good.

Worse yet are the folks complaining that Lucas Frerichs jumped the gun by posting the announcement on Facebook with such exuberance, and that he should have waited for the proposal to go to the planning commission and the council.  After all, the citizens might raise concerns that would cause the council to think twice about the project.

There are times when projects are going to be controversial and it would be prudent to stay neutral.  But this hardly seems like one of those times.

But, for the most part, this seems like manufactured dissent.  This project is a huge win for the community.  Getting Nugget to locate its corporate headquarters here is a huge coup.

As staff notes: “The proposed office and research/development buildings would support General Plan Economic Development policies to encourage businesses to locate in Davis, targeting businesses which improve the City’s fiscal base…”

The staff report, because it is written for the Planning Commission, does not have any fiscal analysis, but it would seem that this could have modest fiscal benefits to the city down the line with little to no downside.

Frankly, I would be disappointed if the council were not championing this project.  We need more of this in town.  Save the dissent for the times when dissent is needed.