It was a moving night and the admiration for the service both outgoing individuals had performed was genuine and heartfelt. 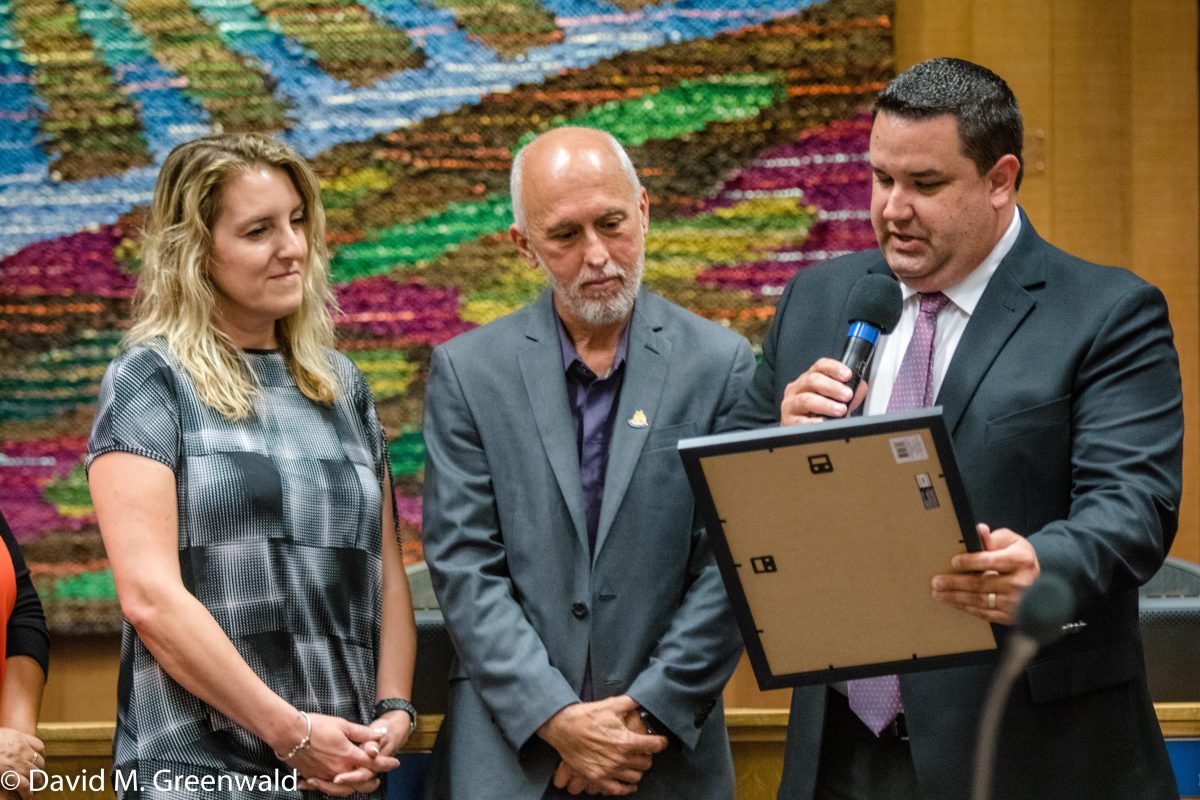 Speaking of Mayor Robb Davis, the city manager stated, “Robb is known for his unparalleled work ethic, his deeply caring nature, his willingness to listen to every voice and his unwavering commitments to transparency, fairness, equity, and fiscal prudence.”

He added, “Robb has never shied away from a conflict, always looking for peaceful, thoughtful, and constructive ways to address differences of opinion.  His tenure on the city council provided him with many an opportunity to practice this skill set.”

Speaking to both, Mike Webb thanked them for their “professionalism and your extraordinary grace in performing your roles.”  He said in his 20 years with the city, “I’m hard pressed to  remember a council, a body that we have up here on this dais, that has worked as tirelessly and as hard as this council has to reach consensus on matters.”  He noted, “You’d be hard-pressed to find many votes of this council that were not 5-0.  There’s a few in there, but not many.”

Cecilia Aguiar-Curry, speaking on behalf of herself and Senator Bill Dodd, gave moving tributes to both as well.  She noted that this job takes people away from their families and that, with Rochelle Swanson, her boys always came first. 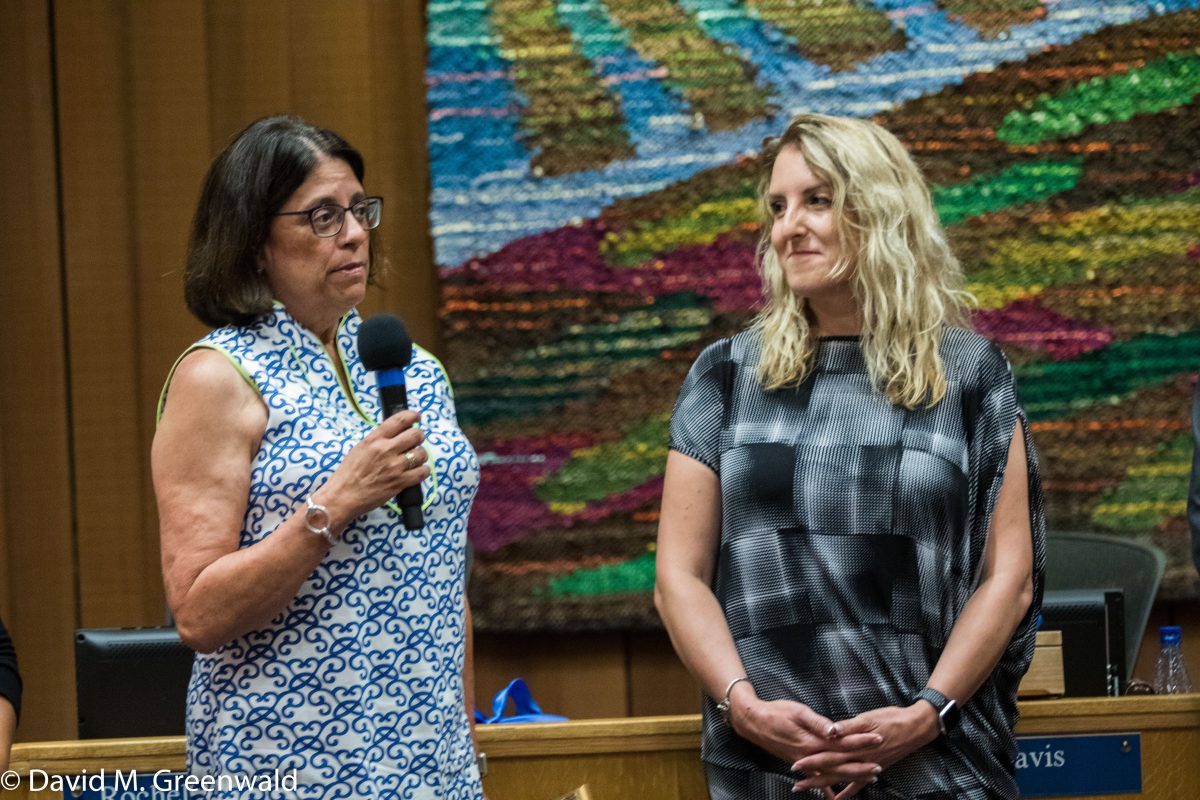 She told Robb Davis that she has been watching him for a long time, including on city council, “how well you conducted meetings and how well you listened to your constituents.”   She said the thing you don’t miss as a councilmember is all the criticism you receive for trying to make good decisions.  “Robb wanted to do the best job that he could,” she said.

Supervisor Don Saylor, speaking on behalf of himself and his colleague Jim Provenza, about the entire council, noted “the challenges that the community has faced during this time, you have met at every turn.  It has been a challenging time for us as a community, both fiscally and what we’ve felt about what’s going on in our world these days, your council has risen to the occasion.”

Don Saylor remarked about Rochelle Swanson’s work starting in the early 90s on the General Plan.  He said that he lost track of her for awhile and then she showed up on the Blue and White Foundation, championing the new DHS Football Stadium.

He talked about her work in economic development.  He said that when they were on the council together, “we thought there was a recession, we should take advantage of it.  You continued that mantle, you carried that banner all the way through your council service.”  He added, “You were recognized across the region as the leader who made Davis a more friendly business environment.”

Don Saylor called Robb Davis “one of the most articulate, dedicated, passionate and eloquent leaders that we’ve seen in our community for many years.  These last two years we’ve needed Robb’s spirit, his willingness to step in front of the moving trains and tell us what sense it made.”

“The city could not have asked for a more appropriate mayor for the times that we were in,” he said.  “We know that you have helped to shape the city for generations to come.”

Rochelle Swanson, speaking to Robb Davis, said that she was so glad that he agreed to do this.  She said that her relationships on the council are close and across the region, “they notice it, we have a unique relationship here.”

Robb Davis, in one of his final speeches as mayor, talked about a decade ago, traveling across the globe, but realizing he had become disconnected from his community.  “It was about 10 years ago, I realized that I didn’t even know my own community,” he said.  He said he started reading “old white guys” and faced these questions: “Do you have roots anywhere in the world?  Do you care about a community anywhere that actually is a place where you lay your head at night?  It really cut to my heart when I read those things and I stopped traveling, I gave that part of my life up and started learning about this community.”

Mayor Davis said, “I see a community that’s so profoundly gifted in so many ways that we have the resources here to address and solve the large challenges that we face.  I firmly believe that. I’ve seen it.”

He said, “I’m encouraged in these days when we’ve seen so many things we don’t understand in the world, I’m encouraged because I know that here, in this local context, in this bioregion, in this place that we call home, we have the resources to really be an inclusive, loving and healing community.”

Gloria Partida and Dan Carson would then be sworn in.

Dan Carson called this another example of the great experiment in democracy.  “The debate and discussion that we had over these last months was greatly enlivened by my eight colleagues who were out there on the campaign trail.  Some of whom are here tonight.  I think (it) really broadened the discussion of our community.  That’s the kind of discussion that we need to have if we’re going to reach sound solutions.”

Gloria Partida took note of the historic significance of her swearing in.  She thanked Robb Davis and Rochelle Swanson stating, “To be true public servants, you need a servant’s heart and a warrior’s spirit.”

She added, “Since the election I have woken up and very keenly felt that trust (bestowed by the voters).”

Gloria Partida said, “I have to point out that this is an historic moment for the city of Davis. I am the first Latinx woman to be voted into the city council.”  She said, “Why does that matter?  It matters because democracy is about representation.  Everybody here on the dais brings their experiences and their realities into this space.  They are voices for the community.  The voices of women and color belong in this room.”

She added, “I think that my being elected says more about our community than it says about me.  We have always been innovative, we always pushed the envelope, we’ve always been creative, we’ve been a little quirky, but it’s who we are.  I’m really glad to be part of this process.”

Brett Lee was then sworn in as the new mayor and the council unanimously selected Gloria Partida as Mayor Pro Tem. 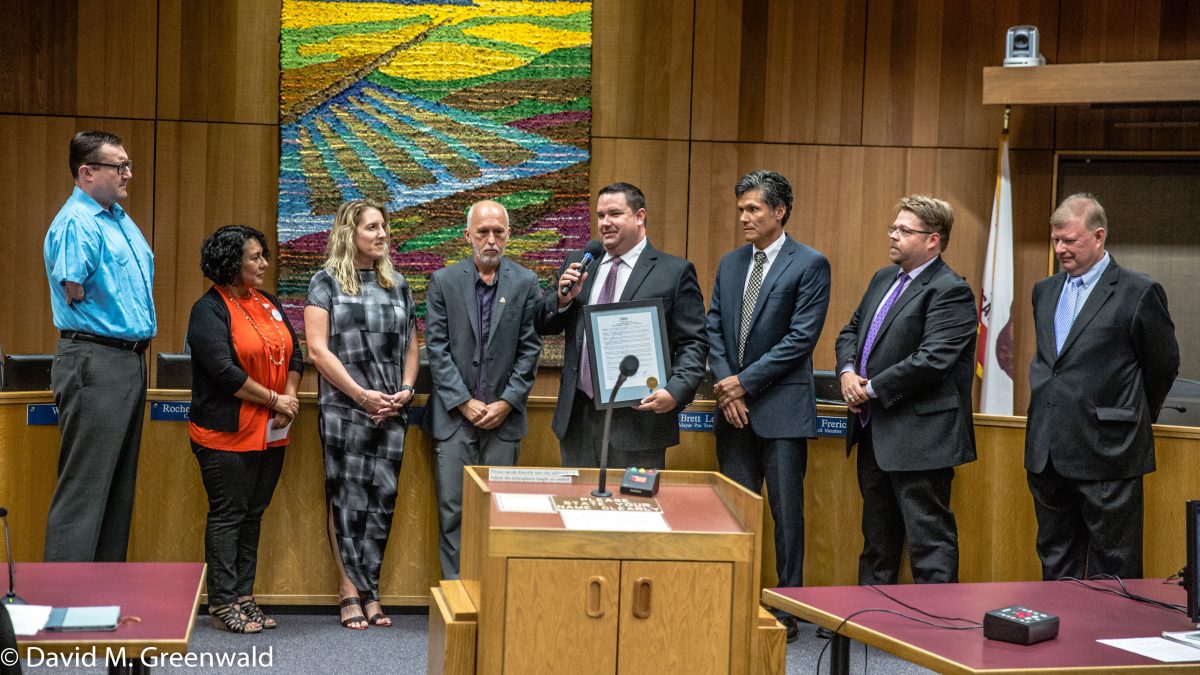 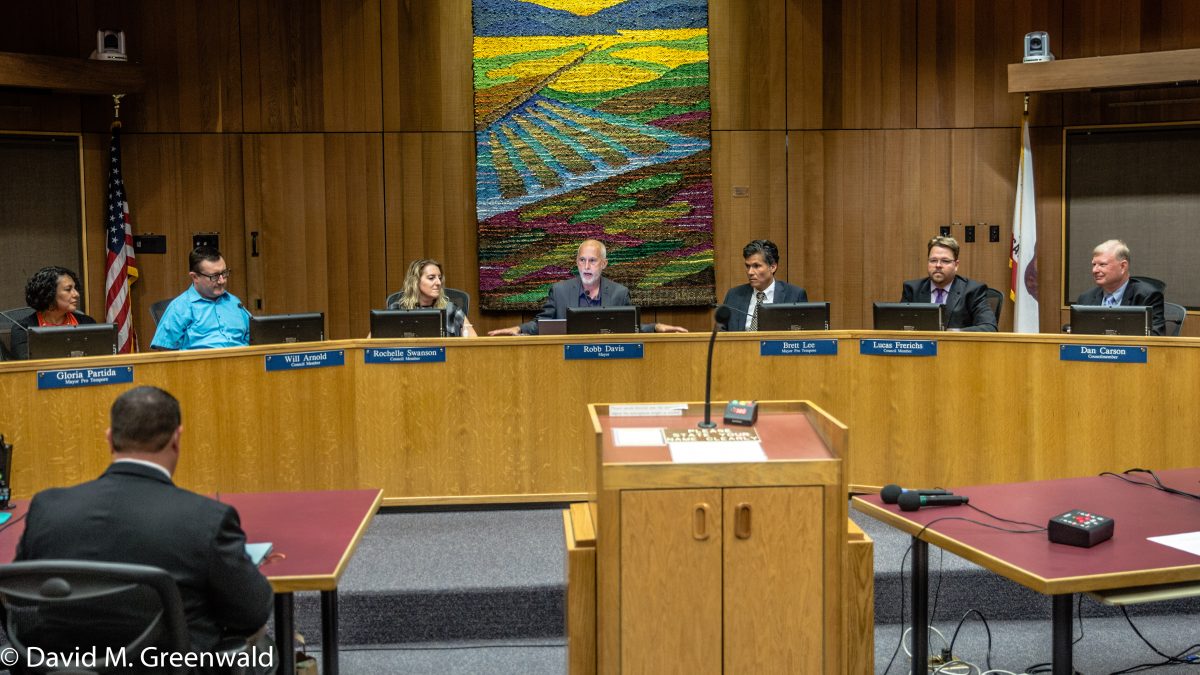 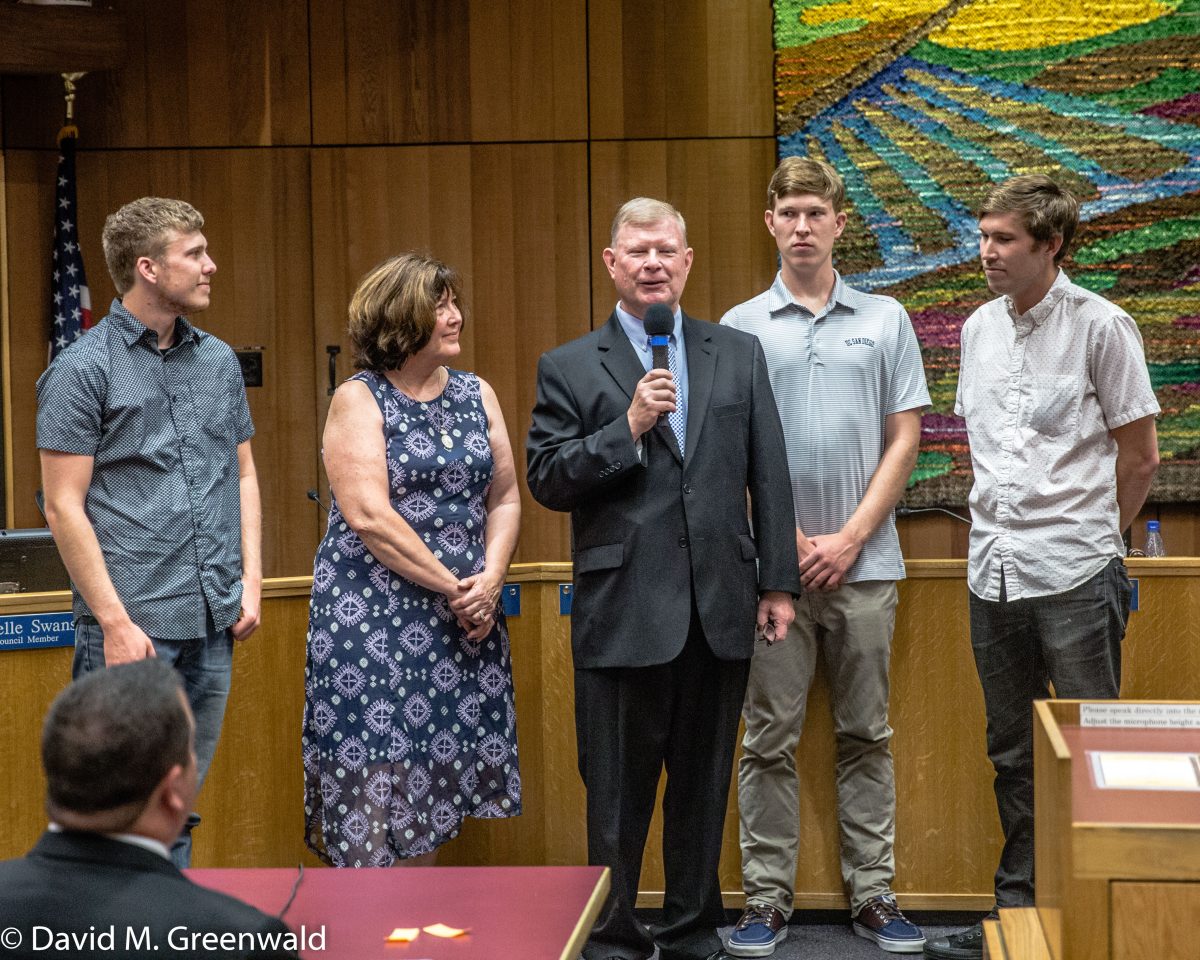 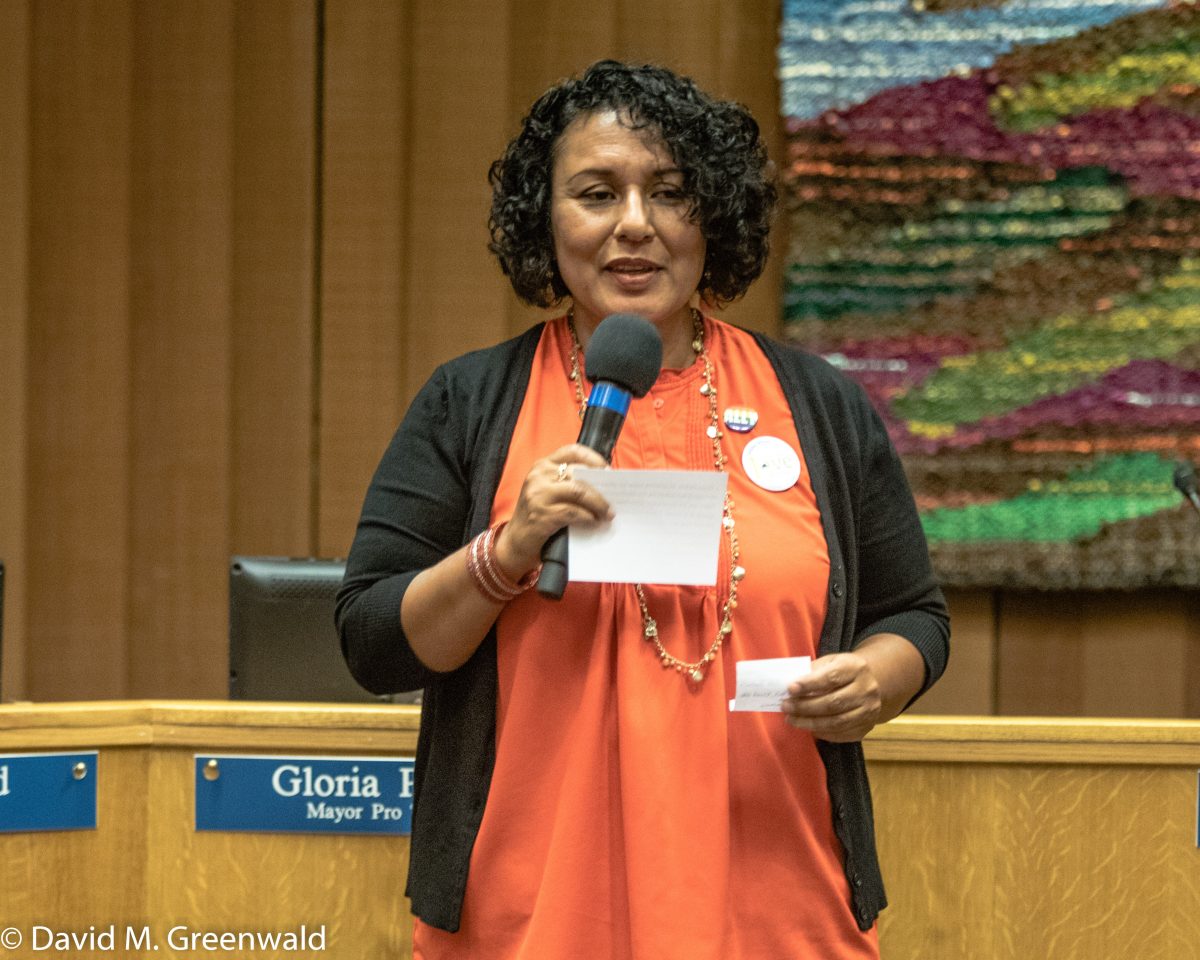 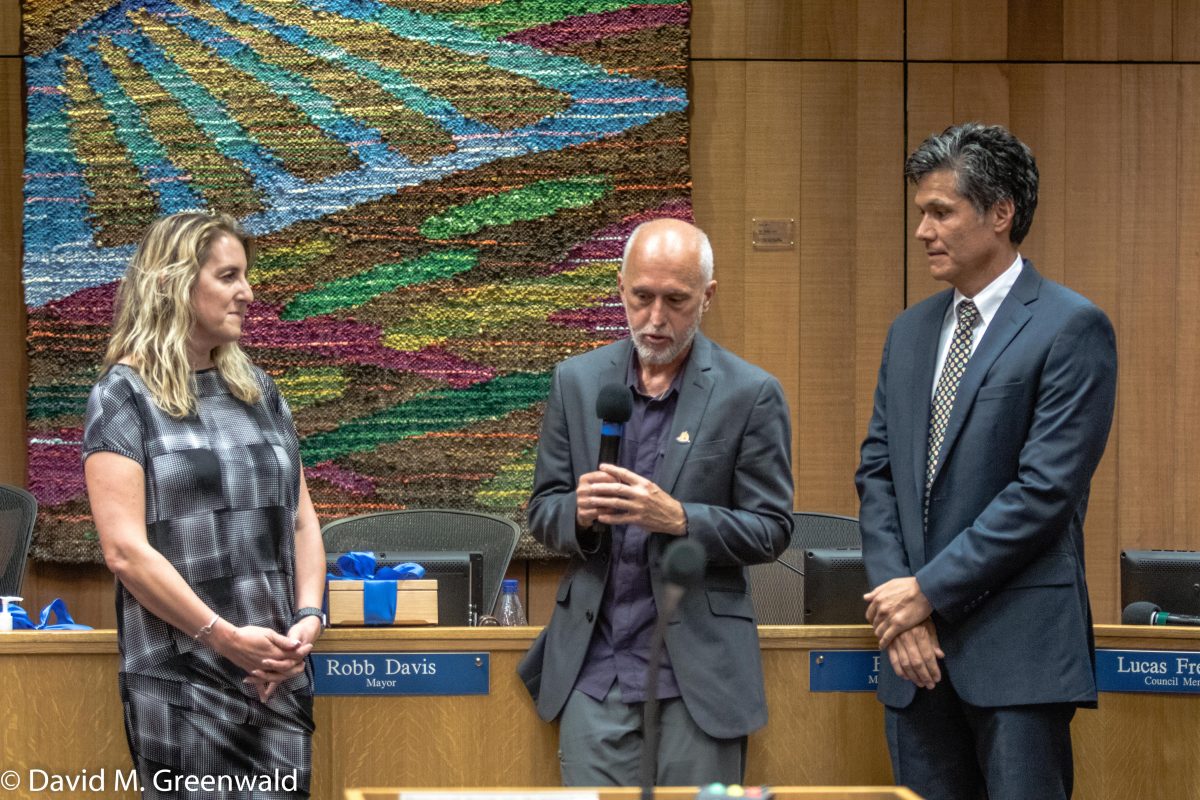 2 thoughts on “In with the New, Out with the Old – a New Council is Seated”