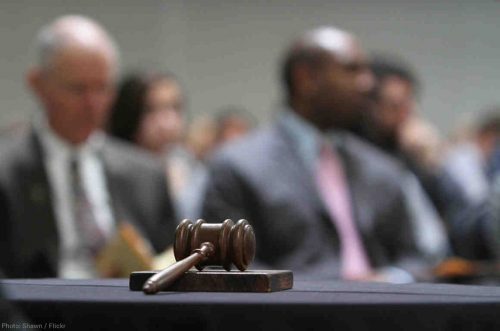 Have you ever watched an episode of “Law & Order”? The creators do an amazing job of dramatizing the court process. The characters playing the prosecutors are always eloquent and passionate as they go toe-to-toe with an indignant defense attorney who is quick to counter every point. We see this version of the trial process all the time in mainstream media. The real life, everyday version is much different. My real-life experience was much different.

Like millions of others in this country, my experience didn’t involve expensive defense lawyers, just overworked and underpaid public defenders. There were no passionate arguments from the prosecutors because over 90 percent of all cases end in a plea agreement, as mine did. I was convicted in 2015 for two felonies and a few subsequent misdemeanors. My felonies were fraud-based charges for cashing checks that weren’t mine. My misdemeanors included things like attempted retail theft, trespassing, and a couple other minor things.

I did not walk into that courtroom a hardened criminal, and I had never been to jail. My real crime was addiction. Like many others, I was a heroin addict and committed these low-level crimes to support my daily use. My addiction, as that of many women, spurred from serious trauma, including sexual and domestic violence.

The agreement between my public defender and the prosecutor was to be a one- to three-year sentence. My time before the judge came, and the prosecutor informed him that we did not have an agreement: They were asking for a two- to six-year sentence. The emotions I felt in that chair, shackled by the waist and ankles, are difficult to put into words. I was at the complete mercy of

that prosecutor. Luckily for me, the judge thought the plea agreement was unreasonable. My final plea: 14 months to four years.

The word “agreement” makes it sound like you agree to a plea deal, but that is not exactly the case. While I was informed I had the right to a trial, I was strongly dissuaded from exercising that right. While I could have waited to bring my case before a judge and jury, I would have faced the maximum sentence available, which would have been 10 years in prison. In my case, the plea deal was presented as my only hope of seeing my children, getting treatment for my addiction, and moving forward. This is the weight of the prosecutors’ power that I experienced first-hand — the leveraging of my life, my children, and loved ones against me.

The prosecutor is the most powerful person in the world of anyone facing criminal proceedings. They have the power to impose a wide array of sentences on individuals facing conviction, and those sentences are often just the start of a life-long navigation of collateral consequences, not just for the person who is convicted, but for anyone connected to them.

I have served my sentence and become a responsible, tax-paying, and positive member of my community. I returned to college to pursue a degree in behavioral science. I volunteer with a transitional housing program, and I have become an advocate for criminal justice reform. I am an active mom and partner.

But regardless of any achievement or level of recognition I acquire, I am a convicted felon. When I apply for jobs, I am flagged as a “high-risk” employee due to my theft convictions and have had difficulty finding even minimum-wage employment. When my own children have school field trips, I am barred from being a chaperone.

Those are just a couple examples of the long-lasting collateral damage caused by incarceration, and things could have gone differently. The prosecutor in charge of my case could have used a diversion option, like treatment court, or a different form of supervision that would have allowed me to address my addiction, options which would have minimized the impacts I still feel on my life today. I have since been told my sentence was extreme and that the prosecutor could have easily diverted me to a treatment court program or community supervision to address the underlying reasons for my addiction and subsequent crimes.

Around the country, voters are beginning to realize that the old “tough on crime” model does not promote safer or healthier communities. My own life has proven this. Prison should not be the automatic answer. The community is not “safer” today because I went to jail. I’m successful today because of support, treatment, and opportunity — none of which I found in jail.

Prosecutors have immense power and use that power, with little public accountability, to make choices that change the lives of real people, like me. This is why it is so important for voters to know who their local prosecutor is and where they stand on criminal justice reform issues. The ACLU’s Smart Justice Campaign is putting a focus on prosecutors. You have the power to change our culture of mass incarceration by electing prosecutors that care more about people than conviction rates.

12 thoughts on “The Power of the Prosecutor: A Personal Account”