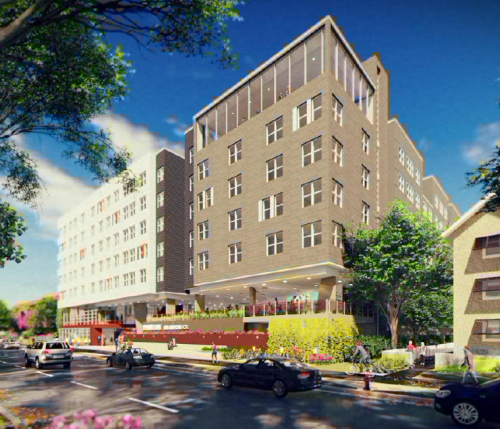 According to the staff report, the project site is just over one acre in size and is located at 525 Oxford Circle. The site fronts Russell Boulevard, across from the Orchard Park Apartments site, in the vicinity of the UC Davis campus. The site was previously developed with a two-story building that was occupied by the Sigma Nu Fraternity.

But the Planning Commission expressed concern that, while they were in general support of the project, they lacked sufficient information to make an informed decision.  The two key findings were a 5-2 vote finding that the project was not statutorily exempt from CEQA and a 6-1 vote that the Planning Commission not recommend council approval based on this determination.

The Planning Commission conveyed the following information: there was general support for the project design and location, they were unable to make CEQA determination based on findings, they preferred that the project meet the 15 percent minimum affordable housing threshold, and they requested further review on the traffic study and wanted to know the justification for parking.

Staff has decided, rather than allow council to hear an appeal, to have the Planning Commission take a second shot at the project.  Staff continues to believe that the project qualifies for two exemptions from CEQA based on it being an infill project and a Transit Priority Project.

“The proposed project is located on an infill site within an Established Community growth type category,” staff writes, noting that on March 2, SACOG (Sacramento Area Council of Governments) determined that the proposed land use, density,

and building intensity are consistent with the assumptions of the MTP/SCS (Metropolitan Transportation Plan/Sustainable Communities Strategy) for such communities.

A second letter was received from SACOG on June 21, 2018, which confirmed the consistency and shows that the site is within ¼ mile of a transit corridor.

Staff, at the time of the meeting, issued a negative impact finding, despite their expression that they did not have sufficient information to determine “whether the proposed project would satisfy the criteria set forth in PRC [Public Resources Code] Section 21155.1 for exemption from CEQA as a Transit Priority Project.”

Staff notes that one objection was that the project was 71 units but contained 440 beds, thus it did not meet the restriction that TPPs may not exceed 200 units.

However, staff notes that the city’s Municipal Code defines a dwelling unit as “one room, or a suite of two or more rooms..”  Thus, by this definition, the project has 71 units.

Staff further notes that the typical household size in the city is 2.5 residents per unit – calculating that ratio at 440 beds would be the equivalent of 176 units, which is still less than the 200-unit maximum established for TPP.

Staff also determined that there is a second statutory exemption for infill projects.  Staff argues that “the project would not result in significant effects on the environment that have not already been analyzed in a prior EIR, that are more significant than previously analyzed, or that uniformly applicable development policies would not mitigate to acceptable levels, and thus qualifies for the Infill Project exemption.”

On the affordable housing front, the project’s original application contained a proposal that 12 percent, or 53 beds, would be designated as affordable.  Based on feedback from the Planning Commission, the applicant has revised the plan to provide 15 percent of the project, or 66 beds, as affordable.

On the transportation issue, staff notes, “Although the project is exempt from CEQA, staff engaged Fehr & Peers to do a traffic operations analysis for the purpose of identifying conditions of approval and determining consistency with City infrastructure assumptions. The study as provided to the Planning Commission May 23rd, was revised and resubmitted on June 2018.”

Based on the trip generation and traffic analysis, staff concludes that “the proposed project would not result in significant impacts to the study intersections under Existing Plus Project and Cumulative Plus Project conditions.”

On parking, while the Davis Municipal Code requires two vehicle parking spaces for each apartment with three or more bedrooms, the project proposes one per unit.

Staff writes: “The applicant designed the project with these features based on the project’s proximity to UC Davis, the Davis Downtown Core, grocery and other shopping, Amtrak, and bus lines; the robust bike culture in the City of Davis; the availability of two electric carshares dedicated to the proposed project; the City’s goals of reducing greenhouse gas emissions and car dependence; the project orientation to students; and the statewide focus on reduced car reliance.”

Staff adds: “The project as proposed balances the need to provide adequate parking and the benefits of reducing automobile travel, considering the following factors: 1) other portions of the Davis Municipal Code where parking requirements are reduced for residential uses in close proximity to transit and other uses; 2) data from the UC Davis Campus Travel Survey; 3) data on car ownership trends when car share options are available; 4) requests from the BTSSC; and 5) project design.”

A key point that the Vanguard has made is that the UC Davis Campus Travel Survey supports the conclusion that few parking spaces are needed for a project of this sort.

The most recent survey notes that, overall, around 35 percent of students drive to campus, however, for those who live within a mile of campus that number shrinks.  Based on this data, staff estimates “at worst, 5 percent or 22 residents would use their cars to travel to school.”

Staff did not include data that show the shrinking percentage of students who even own cars to begin with.

This is a housing project that even people like Eileen Samitz, who came to the May Planning Commission, supported.

Ms. Samitz during public comment noted, “The Oxford Circle Project is a project that seems to be a good project given its location for student-oriented housing.  It makes sense.”  She said, “Many of the students’ needs would be provided right immediately around it.”  She noted that there would be “very little traffic generated” by the project.