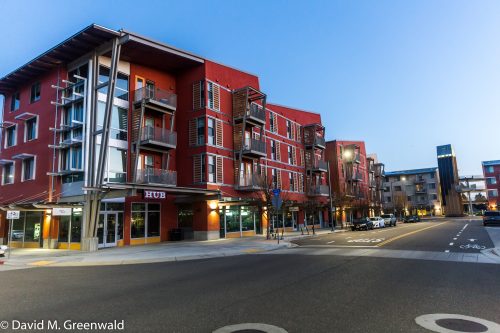 Since the start of the Long Range Development Plan (LRDP) discussion in the fall of 2015, the focus of many in the community, including the Davis City Council, has been more housing on the UC Davis campus.  It is a solution that makes some sense – after all, the city of Davis has limited infill space and even more limitations on the ability to build on the periphery.

The city of Davis has consistently called on the university to build to 50 percent capacity in accommodating on-campus housing.  That joined calls from community members and the Vanguard.

To their credit, the city has also approved around 3600 beds in the city so far, and that number could go to between 4500 and 5000 if Davis Live, Plaza 2555 and U-Mall are all approved with their currently proposed levels of housing.

But still the university is adding about 9050 beds over the next 10 years.

The loudest community voice on housing on campus has and continues to be Eileen Samitz.  It was her op-ed in the fall of 2015 that really set the tone for this discussion.  It was her push that got many in the community on board with the notion of a student housing crisis.  And, while the city hasn’t gone completely in the direction she had hoped for, she continues to push for more housing on campus.

The logic from the start has focused on two key measurements – first, the available land on campus which, while not the 5200 acres some have suggested, is still sizable, and second, the relatively low on-campus housing share that UC Davis has on campus.

Even this past week, as Eileen Samitz was supportive of student housing at the Davis Live site, she pushed for more housing on campus.

“The student housing problem is clearly because of UCD’s negligence for over three decades,” she pushed back.  “It is inexcusable that they only have 29 percent on-campus housing.  That is the way to keep housing most affordable long-term.”

She pushed the students “to do equal advocating to their chancellor and their administration – because I haven’t heard any of that going on.”

But here’s the problem – this notion is misplaced.  The way to keep housing most affordable long-term is not adding housing on campus.  We began to unpack that data this spring by demonstrating just how much more expensive on-campus housing is from off-campus housing.

The truth is that while UC Davis is one of the worst in this regard, it’s almost universally true.  But in particular it is true in the Davis market where housing – ironically – is less expensive off campus than any host community other than Merced.

The data from the speaker’s office’s report bears this out quite clearly. 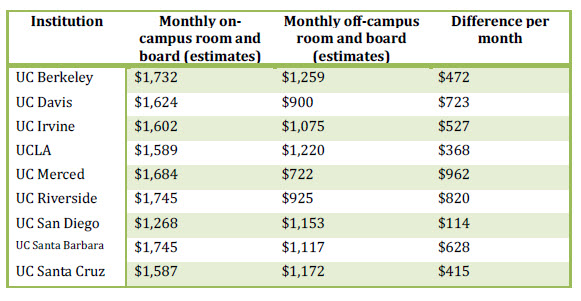 The average cost of on-campus housing at the nine regular campuses is $1620.  That puts UC Davis right on the average.  But Davis is the second cheapest community to live in, so the difference of $722 per month is the third largest behind UC Merced and UC Riverside.  The average differential is $559 a month and even at UC San Diego, which appears to be an anomaly, it is still cheaper (slightly) to live off campus than on campus.

For all the talk that we have heard that on-campus housing is the solution to the housing crisis, the data across the UC System suggests otherwise.

Why is that the case?

What is especially surprising is that off-campus housing remained a much more affordable option for students, despite very low vacancy rates in the host communities.

Despite the low vacancy rates and the huge cost of housing increases, rent costs remained mostly flat across the UCs for the last decade?

The reason for that as reported in the Speaker’s report for the state Assembly: “Students appear to be sharing housing at higher rates and with more housemates and/or roommates than in previous years in order to defray the cost of rent, particularly in expensive areas of the state.

“Systemwide, the percentage of students living in off-campus housing with four or more housemates increased from 31% in 2012-13 to 37% in 2016. Every campus except UC Riverside reported an increase in the percentage of students in this living situation, with the largest 3-year increases (11.5% each) at UC Irvine and UC Santa Cruz. Students tripling or quadrupling up in one room still paid an average of $681 in monthly rent at UCLA, $672 at UCSB, and $563 at UC Irvine.”

While UC Davis is increasing its housing capacity through doubling and tripling up rooms, they are doing so at only about a 20 percent cost-savings to students, rather than the full savings the students might get off campus.

The bottom line here is that our community’s preferred solution – build more housing capacity on campus – makes sense from a number of perspectives, like land use and capacity for sure.  However, it is the least advantageous to students concerned with the rising costs of housing.

Back in 2017, the Vanguard argued that the city should undertake a study to find out how much more housing we needed.  The city declined to undertake such a study.

The university, when the Vanguard requested data on student homelessness and housing insecurity, only had a few-years-old survey that was inadequate (it listed homelessness at three percent which is what the Speaker’s report shows for UC Davis).

The city could not tell us how much more housing we needed.  The university couldn’t tell us how many students were suffering from housing insecurity.

That lack of data in the midst of planning for the next decade strikes me as unfathomable.

But it points to another problem – had we run these data back in 2015, had we known that on-campus housing at UC Davis was 60 percent or $700-plus a month more expensive than off campus, would our solution still have been to put 9050 new beds on campus with no guarantees whatsoever about affordability?

Given those numbers, it might have made far more sense to have the city annex land adjacent to campus and let private developers build more student housing apartments, along the lines of Nishi.

What we have done is convenient for community residents who somehow believe that putting housing on campus is the way to go – but it is far more costly to students, both in terms of financial obligations and also in terms of separation from the community itself.

It is too late now, of course, to reverse this trend.  UC Davis, if it follows through on its plans as it says it will, will have nearly half of its students living on campus by the time we undergo this discussion again.  But next time, hopefully we’ll be armed with better data from the start to find a better solution than the one we have chosen for ourselves this time.

33 thoughts on “Sunday Commentary: On-Campus Housing As a Misplaced Solution to the Housing Crisis”