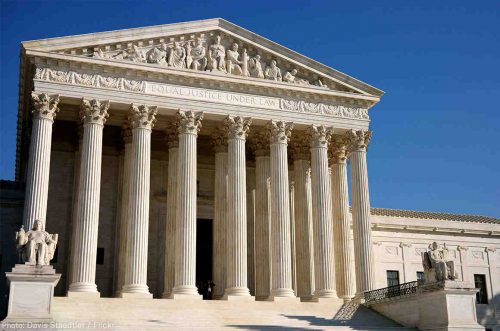 The Constitution protects the fundamental freedoms of speech and association. It protects all speakers equally.  Until it doesn’t — as the Supreme Court made clear on the last day of the term, in its highly anticipated decision in Janus v. American Federation of State, County, and Municipal Employees. The case pitted the First Amendment claims of anti-union public-sector employees against the interests of pro-union employees and employers. And instead of reaching a careful balance, the court sided entirely with the rights of some over the rights of others.

At stake in Janus was whether it violates the First Amendment for a state to authorize a public employee union to collect a “fair share fee” from nonmembers for the cost of benefits that the union is legally required to provide all employees, such as representing them in grievance procedures against the employer.

Over 40 years ago, in Abood v. Detroit Board of Education, the court crafted a stable compromise to balance the various interests, including First Amendment rights, at stake in public workplaces.  It held that public employees who choose not to join a union can be charged fees to cover the costs of benefits the union has to provide them — but cannot be compelled to join the union or pay for its ideological speech.  Such fees, the court reasoned, “distribute fairly the cost” of providing the benefits “among those who benefit” by permitting the union to seek reimbursement for expenses it must pay.  Abood’s balance also recognized the interest of governmental employers to choose to deal

with a single union to further labor peace.

The court in Janus threw out that compromise and adopted two transparently flawed arguments.

Second, the court disregarded the interests of communities, through their representatives, to choose to work with unions to manage public workplaces. In so doing, the court turned its back on a fundamental distinction in First Amendment law:  that governments as employers have greater latitude to regulate their employees’ speech than they have when regulating citizens at large. If I were a lawyer for the government, for example, I would not have a First Amendment right to argue anything I wanted to in court — even if the government could not stop me from making the same argument as a private citizen on a street corner.

Governments have greater latitude to manage employees who work for them, including what they say. The court ignored that distinction in Janus, saying that it is different when government employers regulate an individual employee’s speech instead of groups of employees. But that makes no sense. Most rules at work apply to employees generally. It is unthinkable that the court intended to strip public school administrators of their authority, say, to stop a group of teachers from protesting in the cafeteria, simply because the rule against doing so applied across the board. Rather, it appears that the majority created an unprincipled “unions only” carve-out to First Amendment law.

The decision in Janus directly undermines the interests of those who want to associate in a union. Now they have to pay not only for their own services but for services they are legally required to provide to others. It is particularly troubling because public-sector unions often represent the voices of communities and economic interests that are increasingly marginalized. The court authorized free riders to drain these unions of already limited resources. And it dismisses the interests of governments and the people they represent, including nearly half the states plus the District of Columbia and Puerto Rico, that work productively with unions and think fair share agreements make for good labor relations and better governance.

The Janus decision reads as the product of a politicized court choosing to protect the speech, and political interests, that it prefers. As Justice Kagan wrote in a powerful dissent:  “The First Amendment was meant for better things.”

Share:
Tags:ACLUFirst AmendmentJanusUS Supreme Court
Previous : Sunday Commentary: No Need to Reinvent the Wheel on Economic Development, We Already Have the Plan
Next : Man Found in Violation of Misdemeanor Probation

17 thoughts on “The Supreme Court Applies the First Amendment to Some, but Not to Others”