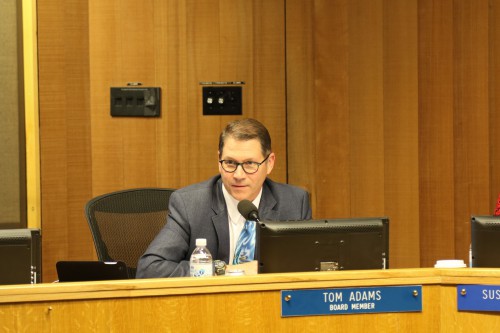 Tom Adams has filed paperwork to run for a second term on the DJUSD School Board.  He was first elected to the board in November 2014, and has worked for the California Department of Education in Sacramento since 1997, serving as the Deputy Superintendent of Teaching and Learning Support.

Tom Adams told the Vanguard, “The district and the community will need to come together on how best to recruit and retain teachers. While the 3.5% increase in salary helps to close the wage gap, a further increase will require increased revenues.”

He said, “I support a future parcel tax dedicated to ensuring that teacher and staff salaries remain comparable and competitive.

“At the same time, the district will need to balance the budget,” he explained. “This is aggravated by the Local Control Funding Formula which does not benefit Davis schools. Only with the parcel tax does Davis meet the state average for funding per pupil.

“At the same time, revenue increases from the state are eroded by increased pension rates set by CalSTRS and CalPERS. These payment rates are not set by Davis but at the state level.”

He added, “The overriding concern is closing the achievement gap. While everyone agrees on the need to address the problem, we must have the courage to evaluate existing efforts and explore new

research-based solutions. I follow the advice of Superintendent Dave Gordon of the Sacramento County Office of Education: build policy and program from the student out.”

Tom Adams was first elected in 2014.  In his four years on the board, he told the Vanguard he has a number of important accomplishments.

Among those are building the All Student Union at Davis High, increasing the number of counselor and nurses, implementing later start at the high school and middle schools, protecting education for all students regardless of immigration status with the “We All Belong Resolution,” expanding the Spanish Immersion program at Montgomery, increasing representation of the LGBTQ community in the curriculum, and putting in place the Graduate Student Profile.

He viewed the passage of Measure H as a key accomplishment, as the local parcel tax funds arts, robotics, music, and world languages.

Mr. Adams was proud to have approved the 3.5% salary increase to close the teacher compensation gap.

And finally, he views the placement of Measure M on the ballot – a facilities bond – as something he hopes will “bring Davis school facilities into the 21st century.

“In my first term, my goal was the inclusion of all students and I used the concept of Universal Design for Learning which means designing learning for all students from day 1,” he told the Vanguard. “This is why I supported the We All Belong Resolution and persistently reminded district staff and my board colleagues of the FAIR Education Act. This act requires that schools include in the curriculum the contributions of LGBTQ and people with disabilities in the development of California and the United States.

“In my second term, my goal will be to make sure we individualize education for our students,” he said. “The graduate student profile is a first step but we will need to improve our instructional approach and offerings to address the needs of students. There are many students who thrive in the current context but many are often forgotten and their needs are not addressed.

“I would like all students to feel that they have been provided the opportunity to have an education that is enriching and challenging and has them think in new ways with new expectations. While we often educate our students to be our equals, we really want them to surpass us and create a better world.”

Tom Adams told the Vanguard he will work to: “pass more bond measures to improve Davis school buildings and create 21st century learning spaces,” “ensure science and history-social science curriculum is updated,” “ improve salaries and benefits for teachers and staff via a new parcel tax measure,” “enrich career education so that our students know about what they want to pursue and the necessity of continuous education, regardless of their profession,” and “make Davis schools a center of innovation and equity.”

So far three have filed – in addition to incumbent Tom Adams are challengers Cindy Pickett and Joe DiNunzio.

Madhavi Sunder has left her seat and the deadline to be appointed to her spot is today (Friday, August 10) at 5 pm.  That seat will be up for election in November.

Barbara Archer holds the third seat and is generally expected to run for reelection.  Candidates have until today to file for office.  For non-incumbents in this race, because Madhavi Sunder will not seek reelection, the filing period is extended to August 15.

7 thoughts on “Adams to Run for Re-Election”