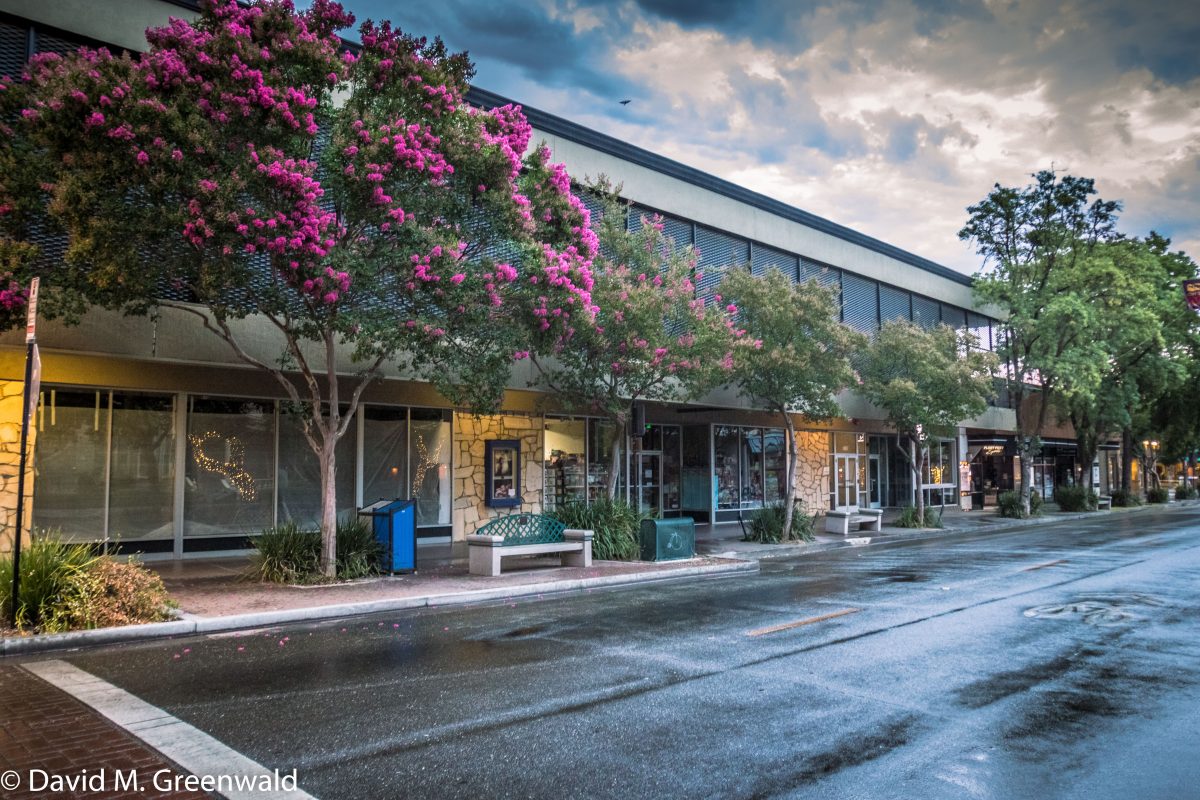 One of the questions that has arisen, going through the discussions on the Davis Downtown, is whether the only redevelopment we are likely to see is going to be very high density.  One of the recent quotes is that the fiscal analysis showed “redevelopment only made financial sense when it was greater than or equal to 4 stories tall.”

But longtime City Planner Bob Wolcott believes that is “too simple” a conclusion to reach as there are “too many factors.”

For example, he notes, “A new one-story pizza restaurant is being built at the southeast corner of B and 3rd right now.”  At the same time, he believes that is “atypical” and “in general the following studies show how challenging it is to feasibly redevelop / build downtown using basic assumptions.”

The Bay Area Economics (BAE) group prepared a pro forma on the financial feasibility “to evaluate the feasibility of retail, office, and residential (for-sale and for-rent) projects, including mixed-use projects.”

This was presented back in June.

They note: “A pro-forma financial analysis models the costs of developing a real estate project and then calculates the financial returns (either net rental income for net sales proceeds) to the developer. Then the rate of financial return is compared to a target rate of return that is considered acceptable under current market conditions, to determine if the project would be financially attractive to developers, investors, and lenders.”

There are a number of cost assumptions.  For instance, BAE “has assumed a site acquisition cost of $150 per square foot.”  They believe the demolition costs, based on consultations with contractors as well as private experience, will be about $5 per lot square foot, for the removal of old structures. 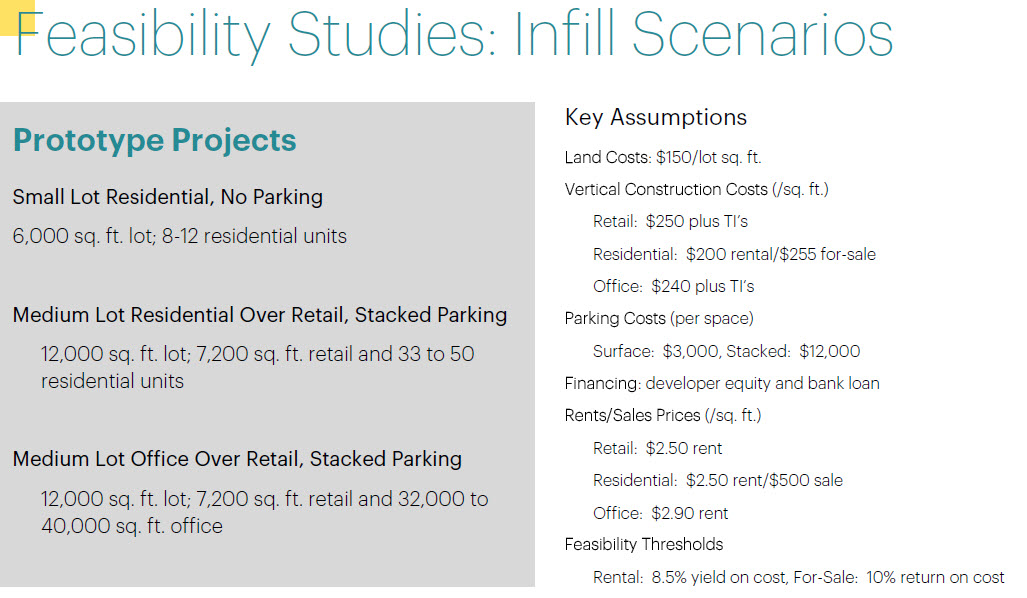 The new construction cost will range between $200 and $255 per square foot, that depends on the use type, “plus additional TIs of $25 per square foot for office and retail spaces.”

There are also parking costs: “BAE estimated parking construction costs will range from a low of $3,000 per surface parking space, to $12,000 per space for spaces created using car stacking systems, to $30,000 per

There are other costs as well, including a “range of miscellaneous costs when undertaking development projects,” which they estimate at “20 percent of demolition and construction costs.”

There are also permits and fee costs.  Financing is assumed at a 1.5 percent loan fee with a six percent annual interest.  They write: “The bank financing terms are based on interviews with a range of local construction lenders, and assume that a developer would be able to finance 65% of the project cost, at an annual interest of 6.0 percent.”

In terms of feasibility targets: “To determine if prototype projects are financially feasible, it is necessary to establish an assumption about the level of project profitability that will be necessary to attract interest from developers and their investors and lenders.”

In general, these are the feasibility targets:

They then looked at three prototypes: 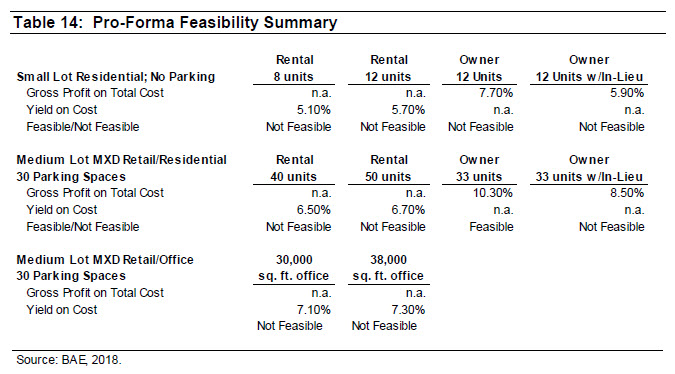 BAE concludes: “These results indicate that under current conditions, it will be very difficult for developers to undertake projects similar to the prototype projects, with a few exceptions. As mentioned previously, it appears that a medium-sized mixed-use project incorporating high density for-sale residential units could be feasible.”

They note: “For the owner/user, the evaluation of ‘feasibility’ may be influenced by considerations of establishing control of the premises where they operate their business…”  They specifically cite the mixed-use office/laboratory over residential project on C Street between 2nd and 3rd Streets as well as the Coldwell Banker real estate office.

That was a point made to the Vanguard when someone cited the C Street project.  It was an owner who was a user at the site who initiated the project.  They noted that “a developer or investor would never, ever initiate a project like that.”  It appears BAE would agree and cited that project specifically, as well as the Pizza 101 project Bob Wolcott cited as examples of owner/users undertaking projects.

BAE concludes that “development feasibility in Downtown Davis is challenging under current conditions.” 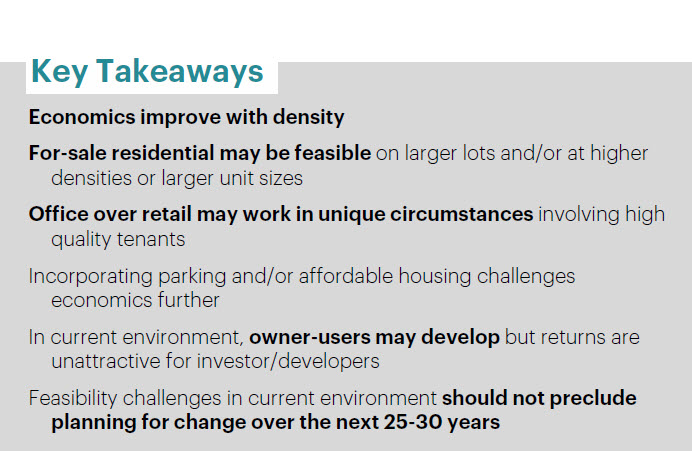 There are important ways that the City of Davis can positively influence development feasibility, including:

A huge consideration would be to reduce time and risk for developers.

20 thoughts on “Analysis: Is High Density the Only Possibility for Redevelopment Downtown?”