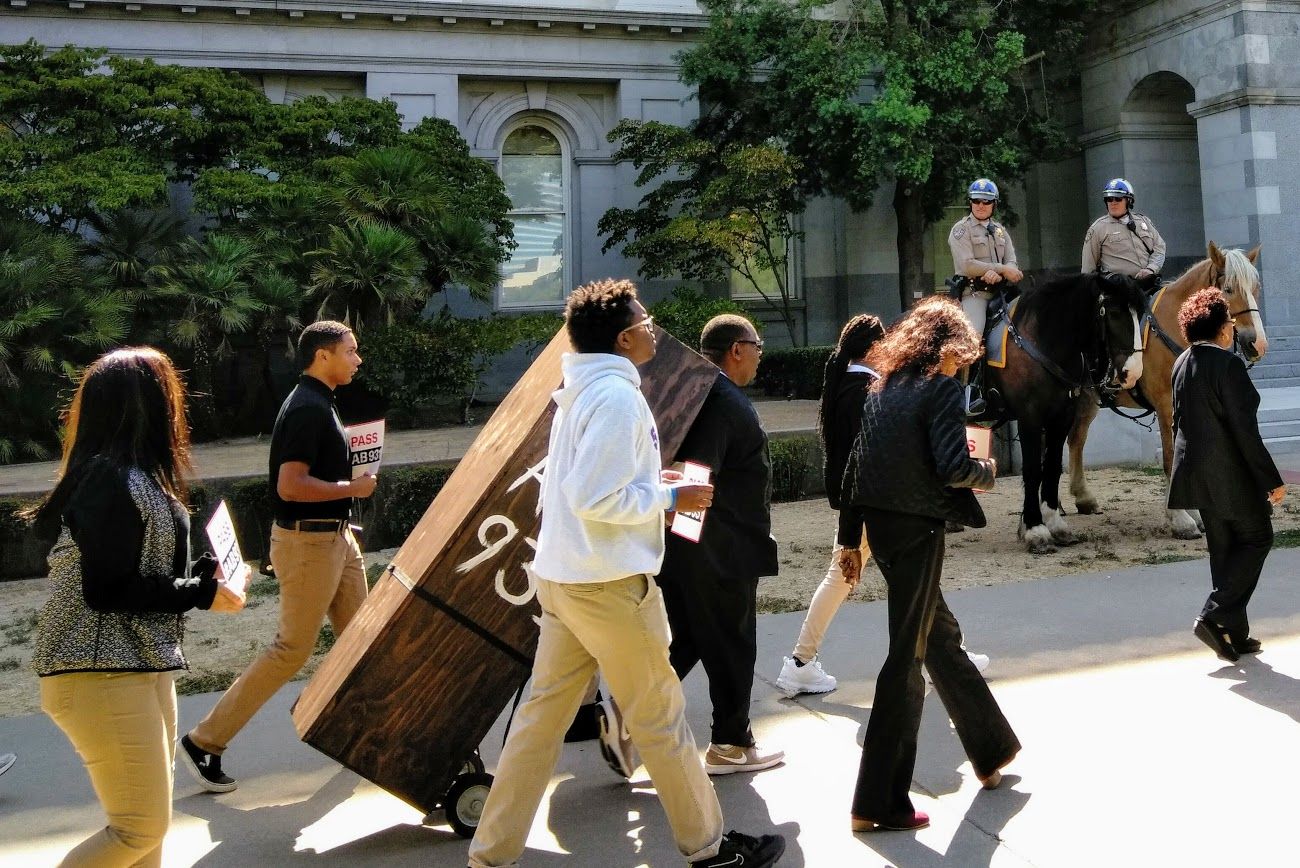 SACRAMENTO – Touting a police reform bill that is “centuries overdue,” proponents of a measure that would make it more difficult for California law enforcement to justify the use of lethal force hauled a heavy casket – representing the 172 civilian lives lost to shootings by police over the past year – around the State Capitol Monday.

Not surprisingly, California Highway Patrol mounted, bike and roving officers that were in the area of the rally initially, made a quiet retreat and remained clear of the casket procession.

AB 931 (Shirley Weber, D-San Diego and Kevin McCarty D-Sacramento) is up for its final test this week – make or break time. It would

redefine the standard for use of lethal force to “necessary” from “reasonable” – the measure was spurred on by the killing of Stephon Clark in Sacramento earlier in 2018.

Clark carried only a cellphone and officers were “safe” behind a building, but still fired dozens of rounds to kill him in the backyard of his relatives. The killing led to months of loud and unruly protests that closed Interstate 5 and city streets, as hundreds poured into city streets. 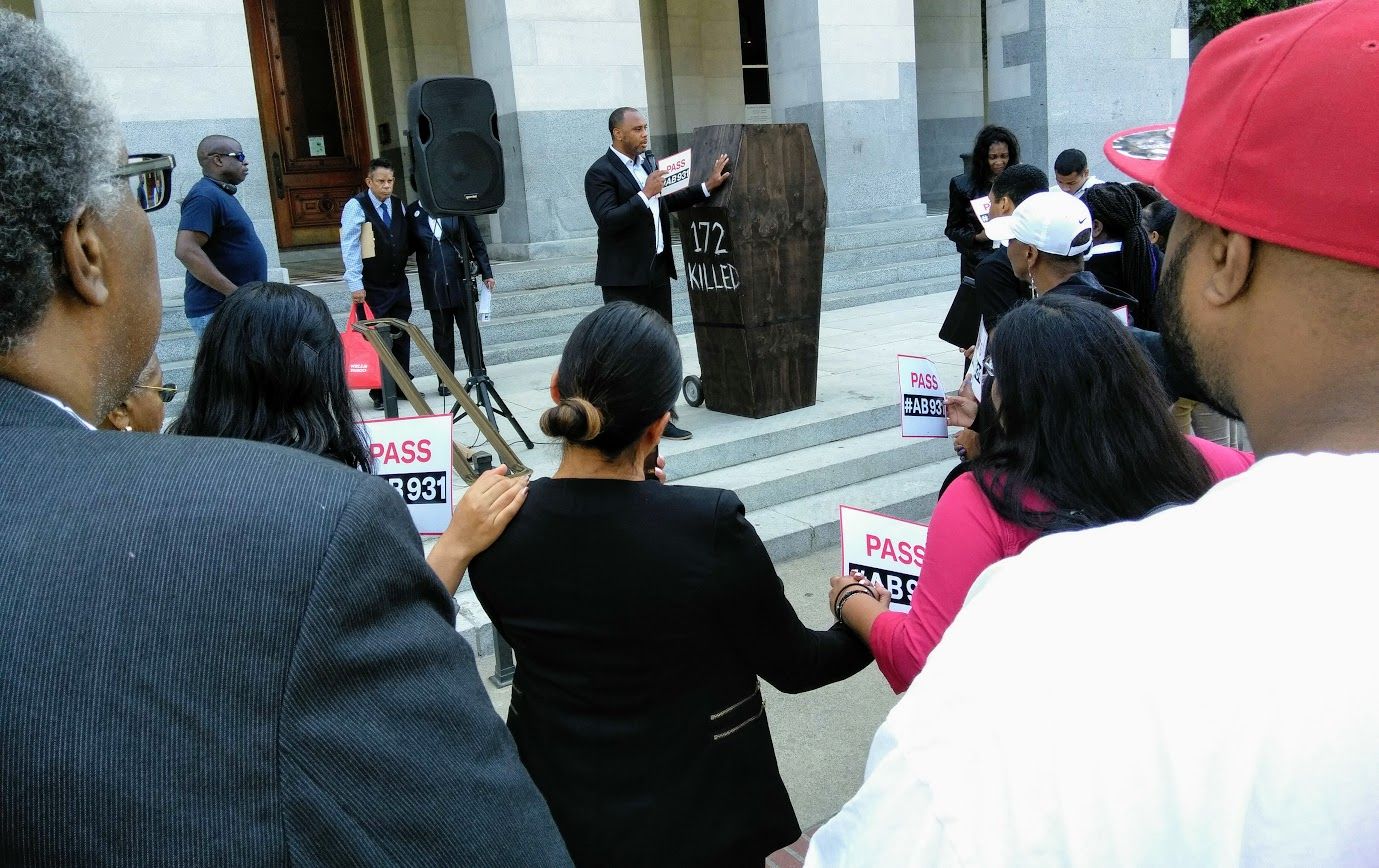 The legislation – not loved by law enforcement – was yanked from the Senate Appropriations Committee “suspense” file this past week by authors and amended to remove part of it that would have made it easier to prosecute officers.

And, even that small change isn’t expected to calm the nerves of the state’s law enforcement groups, who claim AB 931 puts the lives of officers and citizens at risk. Those seeking changes,  however, maintain just the opposite.

Weber insisted the change was minor and was meant to resolve charges by law enforcement that AB 931 was out to “get” them. 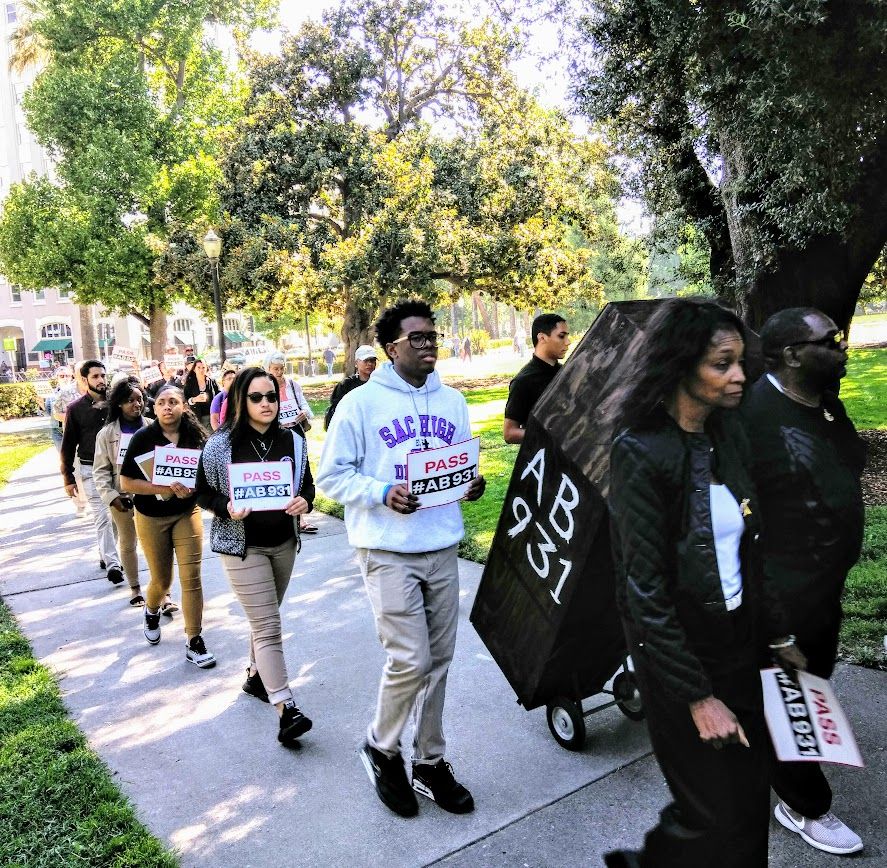 At the Monday demonstration at the Capitol about 50 people rallied, claiming AB 931 is long overdue – centuries overdue.

“This bill goes back in 1872 when federal troops were pulled out of the South, and the Klan took over. There are bad apples in police departments who consistently abuse civilians. The bill has national (implications) not just in Sacramento and the state,” said one speaker.

“It’s not right to fear our protectors. We shouldn’t have to fear police, but I avoid them and that’s sad to see,” said Sacramento Charter High School student Isaiah Soto to the rally.

And, Kevin Carter – who personally pulled the coffin around the Capitol on his back – noted that “a bullet has no eyes and knows no names, its only conscience is that of the user who (pulls) the trigger. No one wins, and we must hold police officers accountable.”

AB 931, in short, codifies that officers can only use lethal force when there are no “reasonable” alternatives to protecting themselves or others. Supporters insist that change is necessary because, increasingly, law enforcement is shooting or killing people – people of color in many instances – without taking steps to deescalate.

Despite the new amendments, officers can still be disciplined or even fired if they violate the new standard. Similar policies in Seattle and other locales have led to a reduction of civilian killings by police.