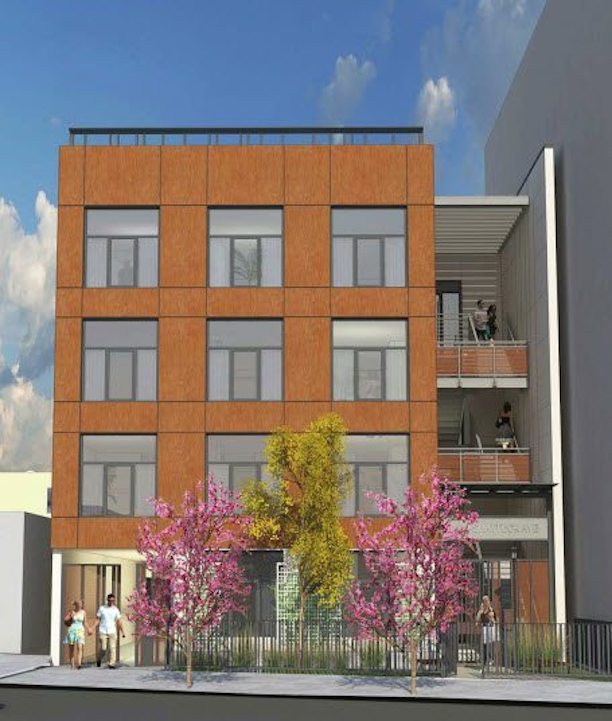 On paper, we have approved the housing we need for students to end the housing crisis, at least for now.  The bad news: it is not clear how soon even the units approved will be built.  As we have noted previously, 3000 beds have been approved at Lincoln40 and Nishi by the council and voters – but they are being held up by litigation.

The university is has committed to 9050, and, while there is some dispute over certainty and timeline, one thing is for sure – it’s not happening tomorrow.

The result is that thousands of students will start this fall in the same position students were in last fall – cramped into mini-dorms and all too many living in a housing insecure manner.

But apparently it doesn’t have to be that way.

From the Berkeleyside publication: “Prefab housing complex for UC Berkeley students goes up in four days.”

The article notes that in a city known for “its glacial progress in building housing” (sound familiar?), a four-story apartment building is going up in just four days.

The article notes: “This new 22-unit project from local developer Patrick Kennedy (Panoramic Interests) is the first in the nation to be constructed of prefabricated all-steel modular units made in China. Each module, which looks a little like sleekly designed shipping containers with picture windows on one end, is stacked on another like giant Legos.”

The project was initially approved in 2010 (that sounds familiar as well), as a hotel, then re-approved as studio apartments, and now will be leased to the university as graduate student housing.  It is slated for move-in for the fall semester.

“This is the first steel modular project from China in America,” Mr. Kennedy said.

According to the article: “The modules were shipped to Oakland then trucked to the site. Kennedy notes that the cost of trucking to Berkeley from the port of Oakland was more expensive than the cost of shipping from Hong Kong.

“The modules are effectively ready-to-go 310-square-feet studio apartments with a bathroom, closets, a front entry area, and a main room with a kitchenette and sofa that converts to a queen-size bed. They come with flat-screen TVs and coffee makers.

“In order to be feasible, modular construction requires standardized unit sizes and design, and economies of scale,” Mr. Kennedy said.

Some of our readers will be pleased to hear that the complex has no car parking (but it does have 22 bicycle parking spots).  It also has no elevator and no interior common rooms.  The ADA accessible units are, of course, on the ground floor.

According to the article: “The modules were stacked on a conventional foundation. Electricity, plumbing, the roof, landscaping and other infrastructure were added.”

Costs are an interesting part of the story.  The developer was expecting that using the prefab material would make the project less expensive than building from scratch.  But he told the publication that the savings have not been as great as expected.

He said, “Sixty-five to seventy-five-percent of the construction costs are still incurred on the site. In addition to the usual trades, we have crane operators, flagmen, truckers and special inspectors.”

He told the publication: “We might have saved some money building this conventionally, but we view this more as a research & development project  — and in that capacity, it was very helpful and educating.”

He noted that such construction makes “probably more financial sense with larger projects (more units) on larger lots.”  He said, ““If you don’t have space to work, it gets very expensive very quickly.

“We’re still trying to determine the optimal size. It’s a pretty new idea here in Northern California. We are learning as we go,” he said.

Clearly, they see this as a way to build more affordable housing in places like Berkeley, where costs are off the charts.  But there may be more important variables than cost.  A bigger variable might be speed.

Berkeleyside talked to the director of communications for UC Berkeley Capital Strategies.  The university was not involved in the design or contraction and has no comment on the approach.

“The University welcomes any and all projects and developments that expand the availability of affordable, accessible student housing in close proximity to campus,” Kyle Gibson said.

It is an interesting idea and perhaps a way for UC Davis to build more housing, more rapidly and for cheaper.  Imagine if they could build housing for a few thousands students – overnight.  Seems like something that they might be interested in looking into?

Share:
Tags:Affordable HousingPrefab HousingStudent Housing
Previous : Commentary: The Human Trafficking Case That Was Never Human Trafficking
Next : Police Are Acquiring Surveillance Tech in Secret, Bill Would Give the Public a Say

14 thoughts on “Commentary: Maybe We Can Think Outside the Box on Student Housing”