With the proposal by University Mall to redevelop their current land use from basically single-story local retail, low density to mixed use, and some similar scenarios envisioned for the Davis downtown, it might be helpful to revisit some of the research on the benefits of mixed use.

When SACOG (Sacramento Area Council of Governments), working with the city of Galt a few years ago, looked at possible development scenarios, they found: “it becomes clear that mixed-use development consistently generates a higher ratio of revenue to cost when compared to separated land uses.”

“Mixed-use development generates an even higher ratio of revenue to cost when compared to stand-alone housing or local retail,” they find.

They write: “One acre of mixed-use development is more economically advantageous in that it can contain several types of revenue-generating uses and a better jobs-housing balance in comparison to one acre of separated, low-density housing or local retail. Separated land uses such as local retail and residential serve a role but should be built in conjunction with development that generates

a higher ratio of revenue to cost, such as mixed-use development.”

The research in Galt is also supported by research from across the nation.

For example, “one study indicates that compact infrastructure is up to 47% less expensive than conventional development patterns (Moris Beacon, 2010).”

Lastly, SACOG’s Blueprint process found that the “region could save $13.8 billion if it built the Preferred Alternative (which promotes compact, mixed-use development and more transit choices) rather than the Base Case (which is a projection of how the six-county Sacramento region would grow if recent development trends continued) over the next 50 years.” 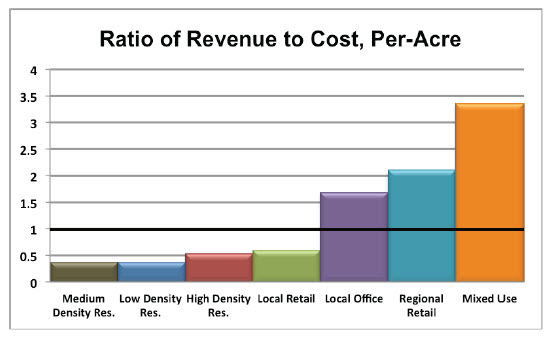 They also cite the work of Joe Minicozzi, who came to Davis to speak a few years ago.

In a 2012 CityLab article, Mr. Minicozzi notes that there is a “fundamental math problem posed by modern cities in America.”

He argues that we tend to think of “broke” cities having the option to either raise taxes or cut services.  But the reality is that there is “long-buried math of our tax system that cities should be exploiting instead.”

He argues: “Per-acre, our downtowns have the potential to generate so much more public wealth than low-density subdivisions or massive malls by the highway. And for all that revenue they bring in, downtowns cost considerably less to maintain in public services and infrastructure.

“We really are kind of preachy, because we know it works,” says Mr. Minicozzi, who has performed similar tax studies in 15 cities across the country. “And the reason we know it works is because cities have been here forever. That’s all we’re saying: think urban. When I talk with people about urbanism, we as hairless apes have lived in these things called cities for thousands of years. Now over these last 40 years, we think we don’t need them any more?”

His solution – if you have underutilized buildings in the downtown, fix them up “because that’s where your wealth comes from.”

That sounds easy.  The challenge is that while he is looking in places like Asheville, North Carolina, where land values and construction costs are comparatively low.  Davis has additional challenges because of the cost of redevelopment and the lack of RDA money.

That is precisely why we should be excited by the University Mall project.  The Brixmor Property Group sees opportunity in turning the 8.25 acre parcel that houses about 103,695 square feet of neighborhood shopping space in a single story and turning it into something much more dynamic.  They would convert the project into about 808,500 square feet, but, more realistically, it is the 560,000 of residential and retail rather than the 250,000 parking garage that figures to greatly add value.

To understand the difference, we go back to the work of Joe Minicozzi in Asheville, NC.

He argues: “The really interesting math, though, comes not when we compare derelict buildings to their refurbished selves, but when we look at unsung half-block offices alongside what we think are our big municipal money-makers: vast hotels, malls, big-box stores.”

In Asheville, they have a Super Walmart which is 2.5 miles east of downtown.  Its tax value is $20 million.  That sounds good, but, as Mr. Minicozzi points out, it sits on 34 acres of land.

That means, he argued in 2012, the Super Walmart yields about $6500 an acre in property taxes, while the “remodeled JC Penney downtown is worth $634,000 in tax revenue per acre. (Add sales tax revenue, and the downtown property is still worth more than six times as much as the Walmart per acre.)”

Here is a point he made in his presentation in Davis as well.  “We look at miles-per-gallon, not miles-per-tank, because tanks come in all different sizes. We should look at buildings the exact same way.

That’s again why the Davis Downtown is so inviting.  We have a bunch of single-story buildings in the downtown and we could transform them into three to six stories of mixed use and generate far more in the way of revenue for the city in a limited space.

We do have to think height and density in order for it to pencil out for the developers.  The city had a fiscal analysis done that showed “redevelopment only made financial sense when it was greater than or equal to 4 stories tall.”

But we need to understand that the fact that Brixmor Property Group is proposing this redevelopment shows they believe it will pencil out and that investors will put their money on these projects.  If that’s the case, we should be able to do the same in downtown Davis as well.

Share:
Tags:DensificationJoe MinicozziMixed-UseRedeveloplment
Previous : Do We Deserve to Kill?
Next : Commentary: On the West Davis Affordable Housing Proposal

41 thoughts on “Commentary: Why We Might Want to Encourage Mixed Use”