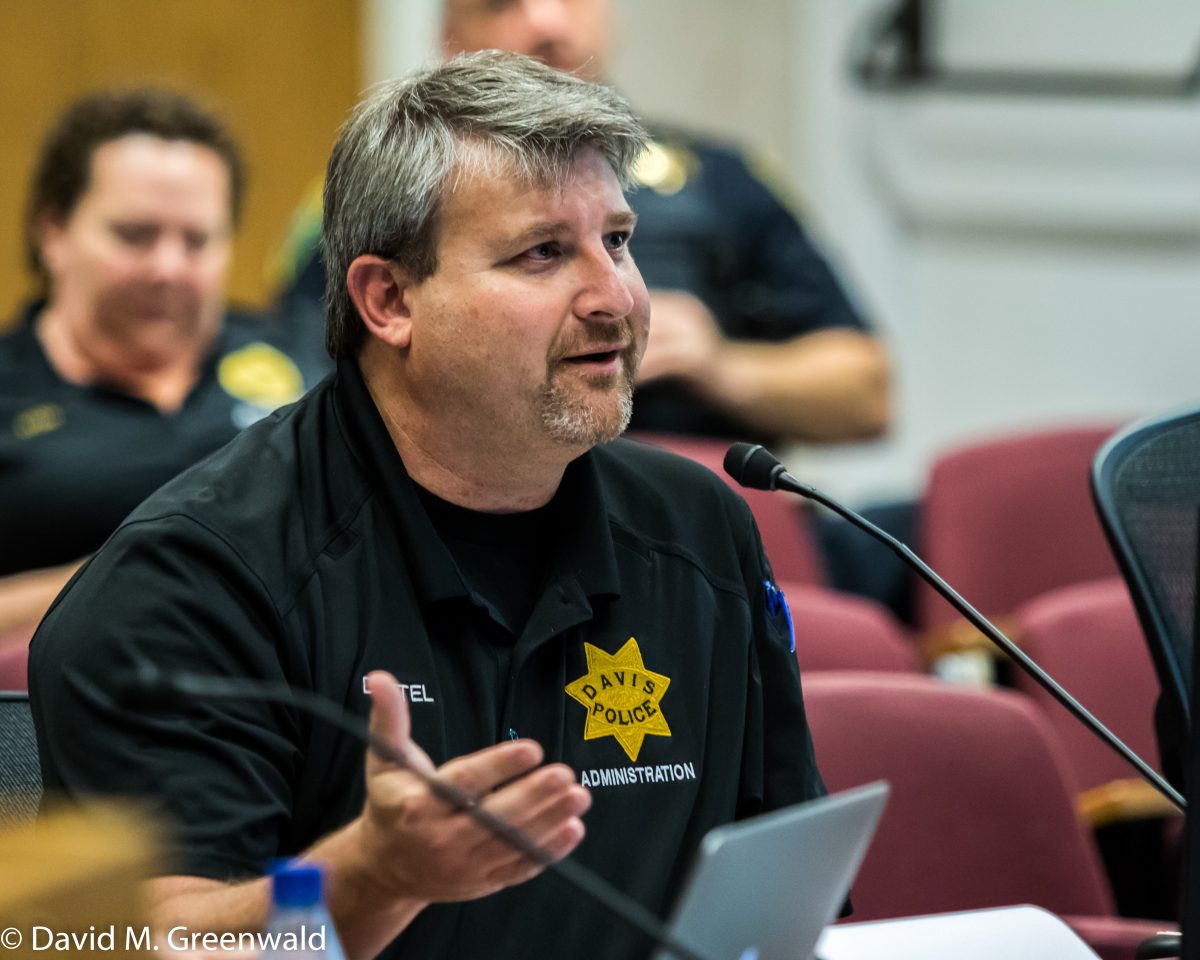 The point in question was whether to pass an interim policy or wait until September 25.  But even on September 25, the police auditor position (IPA, or Independent Police Auditor) would not yet have been filled and the Davis Police Accountability Commission (DPAC) would not have been appointed and able to make recommendations.

So Will Arnold thought he was taking the reasonable approach by passing an interim policy which would be reviewed in six months.  Mayor Brett Lee and Councilmember Dan Carson agreed, but neither Gloria Partida or Lucas Frerichs did, apparently.

Not only did they vote against the policy, but they never explained their vote.  It was not until the vote was taken that the council realized there was opposition.  Suddenly there was a no vote and Brett Lee was about to declare it a 4-1 winner when Lucas Frerichs voted against it as well, making it 3-2.  (Edit: I am told I have this backwards and that Lucas voted no originally and Gloria added on to make it 3-2; it definitely was 4-1 at first).

Lucas Frerichs explained to the Vanguard, “I totally support the new policies, but wasn’t satisfied with the language last night.”  He said he wanted the IPA to provide recommendations and have had the meeting between the Chief and People Power to have occurred.

Gloria Partida told the Vanguard that she didn’t want the policy “to go forward without more work.”  She felt that putting it on pause would allow them to give their full attention to it.

Some of the activists were more pointed in their concerns.  Stephanie Parreira urged the council to “seriously revise this before it gets passed.

hear,” she said.  “The critical incidents in this policy, need to seriously be expanded.  Right now they only consist of incidents where someone dies or is seriously injured.”

Francesca Wright from People Power Davis was similarly critical of the policy.

She praised the council for the ordinance, but stated, “While these are promising first attempts, we believe that they are not fully in compliance and require much greater specificity.”

That went against best practices at the time and the ACLU recommendations.  The concern was if the officers could see the video first, they would be able to tailor their answers and report to what they see on the video.

However, at the time, Darren Pytel, not the chief yet, was concerned that the DPOA (Davis Police Officers Association) would not support the policy with that provision.

The new provision is that officers will provide a “pure statement” prior “to reviewing body-worn camera following a critical incident.”  He told me that the times have changed and that the issue is no longer a concern for police officers.

The other big change is the release of the video.  The Vanguard was always very concerned that there was no effective way to publicly release a video.  The video would be subject to the Public Records Act, but under the PRA, such records would be considered investigative records and therefore exempt from disclosure.

Effectively, the only way to get a video released would be through criminal proceedings or civil litigation.

But as we know, in a critical incident, it is important for agencies to get the video out there.  Sometimes, that video will exonerate the officers and sometimes, as Chief Pytel put it on Tuesday, it shows stuff that they don’t want to see.

“It is the policy of the Davis Police Department that video evidence of critical incidents involving Davis police officers that is within the Department’s possession be released to the public within 45 days of the incident. Video may be released earlier if the Police Chief determines that earlier release is in the public interest,” Chief Pytel laid out.

He noted there are a number of incidents where they have to release the video much earlier than 45 days.  Council amended the policy to allow for the city manager or the interim auditor to authorize such a release in consultation with the police.

Critical incidents drew some concerns – these include officer-involved shooting, use of force resulting in death or serious bodily injury, in-custody deaths, and “any other police encounter where the Police Chief and the City Manager determines release of video is in the public interest.”

The lack of clear video release policy in the Picnic Day incident definitely did not help the department.  The Vanguard filed a public records request at the time and the police department, while denying that request, decided to release the video from a civilian dash cam, which at least gave the public a picture of what happened.

While there is concern – and probably rightly so – about what is considered a critical incident, more important is the acknowledgement that the video is simply going to have to be released and, if it not automatic, they now have the ability to use public outcry to trigger it.

Bottom line, while I would like some of the concerns of the public to be addressed, the policy is a huge step forward from what it was in 2015.

Share:
Tags:Body-Worn CamerasDarren PytelLucas FrerichsPicnic DayWill Arnold Gloria Partida
Previous : Have Conservatives Hijacked The First Amendment?
Next : Commentary: Big Question for the School Board is What They Will Do About Vacant Seat

14 thoughts on “Commentary: A Surprising Vote Masks the Importance of Body Camera Changes”