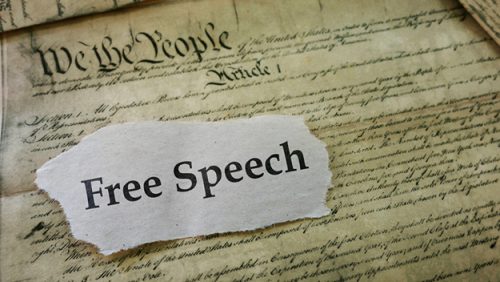 Have conservatives hijacked the First Amendment?

Critics are increasingly making this claim, maintaining that under Chief Justice John G. Roberts Jr., the First Amendment, once an important safeguard for progressive speech, has become a boon to corporations, conservatives and the powerful.

But in most instances, the First Amendment doesn’t favor speech of the right or the left; it simply takes the government out of the business of controlling speakers by virtue of what they say. It often empowers the powerless. And most important, it helps check official abuse.

To be sure, conservatives and corporations are invoking the First Amendment, and sometimes winning. In Citizens United v. Federal Election Commission, the Roberts court deployed the First Amendment to guarantee that corporations can engage in unlimited campaign spending. A recent study found that the Roberts court has more often protected conservative than liberal speakers.

Justice Elena Kagan herself, dissenting in Janus v. American Federation of State, County and Municipal Employees, accused her conservative colleagues of “weaponizing the First Amendment” when they ruled that public sector unions cannot charge nonmembers “agency fees” because it amounts to compelled speech.

But these developments should not lead liberals or progressives to lose faith in the First Amendment. For starters, the amendment’s core requirement is that the government must remain neutral regarding the content and viewpoint of speech. As a result, a decision protecting conservative speech will equally support liberal speech.

When the Roberts court ruled that the First Amendment prohibited holding the Westboro Baptist Church liable for displaying anti-gay signs outside a military funeral, its rationale would equally

Some argue that the First Amendment’s very neutrality is problematic, because in an unequal society, the amendment will favor the haves over the have-nots. We all have a formally equal right to speak, but only George Soros, the Koch brothers and a handful of others can spend hundreds of millions of dollars advancing their preferred candidates or positions.

But this argument proves too much. All rights are more valuable for the rich. The rights to have an abortion, to send your children to private school, to exclude others from your property or to hire your own criminal defense lawyer are all more fully enjoyed by people with resources. Social inequality may be a reason to support progressive taxation or robust equal protection guarantees; it’s not a reason to retreat from free speech principles.

In a more fundamental sense, the First Amendment favors people without power and influence. In a democracy, the rich and those in the majority don’t need constitutional protections; they can generally enact their desires through ordinary political processes. The targets of censorship are typically dissidents, outsiders, the marginalized.

History illustrates the point. The Constitution’s speech protections did not emerge fully formed when the nation was founded. During World War I, for example, the Supreme Court upheld long prison sentences for merely criticizing the war. Over many years, anarchists, communists, labor unions and civil rights activists fought for and earned the speech rights we know and take for granted today.

Nor is the First Amendment outmoded. The need for its protections are as urgent as ever. In just the last year or so, my organization, the American Civil Liberties Union, has invoked the First Amendment to defend high school students disciplined for walking out from school to call for gun control, as well as other students penalized for posting pictures of guns on social media; a student newspaper denied funding after publishing a satire of “safe spaces,” as well as fans of a hip-hop band labeled gang members; Milo Yiannopoulos and the animal rights group People for the Ethical Treatment of Animals, both of whom were denied permission to advertise on the subway by the Washington Metro Authority; and anti-Trump as well as pro-Trump demonstrators. We’ve defended flag desecraters, union organizers, and citizens blocked from their representatives’ Facebook sites for their criticism. And that’s just the beginning.

As even this very partial list shows, government officials continue to be tempted to silence people for their views. Some of our clients are liberal, others conservative, but all have been singled out because they have upset those in power.

Not every First Amendment argument is justified, of course. The A.C.L.U. supported the public sector union in the Janus case, for example, saying that charging workers for services that the union is required to provide to them is not a First Amendment violation, any more than requiring people to pay taxes for government policies they oppose. But even if conservatives sometimes win free speech cases they should lose, now is not the time for anyone to dismiss the First Amendment as a tool of conservatives.

Since Donald Trump’s election in November 2016, Americans have been exercising their First Amendment rights to engage in resistance: demonstrating, calling their representatives, associating with like-minded citizens in defense of core values, shedding light on official abuse through the free press, and expressing themselves on social media.

When one party controls all three branches of the federal government, the checks and balances have to come from the people. It’s on us. And it’s the First Amendment that gives us the tools to act — including the rights to speak, associate, petition the government and enjoy a free press.

27 thoughts on “Have Conservatives Hijacked The First Amendment?”