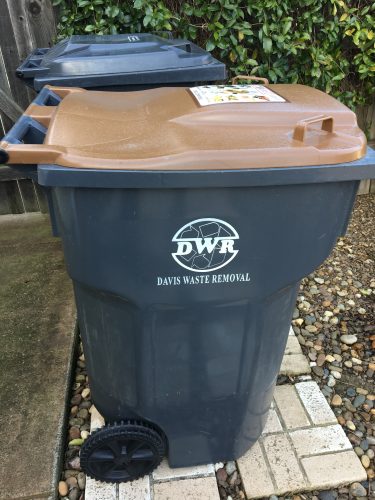 The city of Davis made a number of changes to their solid waste pick up policies and pickup service.  During their review in December, members of the URAC (Utility Rate Advisory Commission) requested the city prepare and utilize a survey to get a better feel of how customers would respond to different options, and how they use the current system.

A community survey was developed and released in April.  The survey received over 1100 responses.

The survey found that most people were using their carts.

“More than half of the respondents (nearly 64%) reported using their carts every week for yard materials, while the majority (80%) reported use at least every other week. Overall, the cart will accommodate the materials the majority of the time, with 68% of households reporting they have enough space in the cart at least most of the time, versus 32% reporting only half or less of the materials fit,” staff reports.

They found, based on the survey, “yard materials would not fit in the cart only 3-4 times per year, and generally this time is Fall.”

The big question was “should the service change?”  The city, in a staff report from earlier this summer, reports, “When asked for a preference between the three options of keeping the loose in street

The breakdown went: 25 percent to keep the service the same, 60 percent for modification and less than 10 percent for elimination.

The biggest requested change was: “keeping the current loose in the street pickup schedule, but extending the leaf season by an additional four weeks, into January.”

The second highest response was: “to eliminate the loose on the street pickup during non-leaf season, but extend the ‘leaf season’ pickup by four weeks, into January.”

Based on these survey results, staff recommends the following options be considered by the council:

Staff writes: “While the choice to eliminate the service was not ranked highly by the community responses, it provides an important comparison of the costs of service for the program. Comparing the cost of solid waste service without loose in the street collection to the cost of yard material pile collection options gives perspective on the actual costs for ratepayers for the service.”