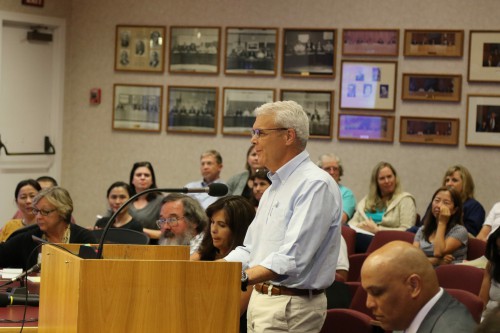 A comment by School Board Member Bob Poppenga has triggered some conversation.  On Thursday, as the board was deciding on a process to select a replacement trustee for Madhavi Sunder, Mr. Poppenga stated, “[I]n this particular open position, where we’re looking at maybe three months, I wanted to be clear that I would not vote for any current non-incumbent candidate to fill that position.”

He explained that there are two announced non-incumbents running in November.  “I think it would be terribly unfair to consider appointing a candidate that’s not an incumbent,” he said.

Barbara Archer did point out that when they were running, she, Bob Poppenga, Madhavi Sunder and Alan Fernandes, among others, all entered the appointment process.

“The difference there, Barbara, was that was for a two-year term,” he said.

“We can’t tell people not to apply,” Tom Adams said.  He said, that’s “really a discussion for August 16.”

It is true, in 2014, Bob Poppenga himself attempted to be appointed to fill the vacancy left by the resignation of Nancy Peterson.  It is also true that there were a number of differences.  But that process to me suggests that Mr. Poppenga’s approach is reasonable.

There are key differences from 2014 to now.  First, the duration was longer – it was eight months, not four months.  That may not seem like a huge difference, but it is twice the duration.

Second, unlike this time, the vacant seat had not been up for re-election.  That meant that someone would be appointed to that seat and then there would be a new election for the remainder of the term.

Barbara Archer is correct that there was no reason Alan Fernandes, who was appointed to the board in 2014, had to run for the two-year seat rather than the four-year seat.

But it was to his advantage to do so.  Instead of running in a crowded seven person field for three open seats, by being appointed, he chose to run in the two-year seat field, separate from the rest of the candidates, and

He would not face contested election until November 2016, when he had already served nearly three-quarters of a full term.  In effect, the decision by the school board created an incumbent who had tremendous advantages.

So with four months until Madhavi Sunder’s term expires, why should the school board create an electoral advantage for someone who is already running for office?  That is the point that Bob Poppenga is making and one that I agree with.

There appears to be one open seat in the fall – let the voters decide who is going to fill that.

Doing otherwise would create a huge advantage for one of the candidates.  They would face a very different path than Alan Fernandes faced, but they would in effect be the appointed incumbent.

One of the reasons Alan Fernandes was selected is he had run for that seat two years earlier.  Indeed, he finished third and Nancy Peterson finished second.  The board therefore felt that Mr. Fernandes had at least faced the voters.

One person posting on Facebook responded, saying that “if a qualified candidate is available .. they should be considered. Announcing one will not even consider anyone else .. is amazingly short-sighted..”

I don’t agree.  There are different perspectives.  My view is that if there is a qualified candidate available who wishes to serve on the school board and run for election, the electorate and not the school board should then be the one to select him.

It is not like there is one right answer here – it is simply a matter of preference.

My preference would be to appoint a former school board member.  Someone who already knows the district, someone not interested in serving beyond election, but someone who can step in for five or six board meetings, not have to get up to speed and make what could be important decisions for the board.

The most interesting thing is to see how the other three board members approach this.  Bob Poppenga is largely unaffected by this decision, at least electorally.  However, if Barbara Archer and Tom Adams run for reelection, if they end up appointing one of their possible rivals to the board, they may ironically make their paths more difficult.

This is another reason that this process is best filled by someone who is temporary.  There is an inherent conflict of interest for the board to select someone against whom two will have to run in a few months.

The easiest way to avoid these problems – pick a person who will serve well for the short duration and let the voters have a clean choice in November as to who they want to serve them on the board for a full term.

9 thoughts on “Monday Morning Thoughts: Give the Voters a Clean Choice for School Board”